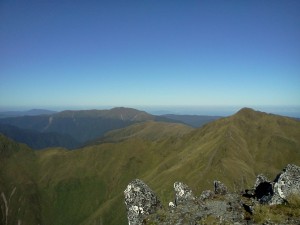 It was going to be a great weekend with light winds and sun shine for Weimen’s trip to Tarn Ridge hut.

I had been in that area many times, so I asked Weimen what he had planned and I gave him the times I thought the different options would take. After he had studied the options (I think he had a book which tells you the time from a trampers perspective – not DOC, so he was onto it). The schedule was to be: Friday night Holdsworth carpark to Atiwhakatu, Saturday from Atiwhakatu across the Kings to Tarn Ridge Hut, then Sundat Tarn Ridge Hut across Mitre Peak and via Mitre Flats Hut back to the Holdsworth carpark.

The three of us ambled our way to Atiwhakatu hut and to pass the time we chatted and made bets as to how long it would take us to get there – our guesses were only 10 min apart, but Weimen won with 1.5 hrs on the dot! To our surprise, there was only one other person at the hut so we had a room each!

After a hearty breakfast and a cup of super strong coffee, I was buzzing to go, with the other two not far behind. To pass the time this time, we compared heart-rates (when we stopped and 5 min after that) after climbing up for about 45 min, I wont tell you who won that competition.

A lolly and drinks stop at Jumbo gave us the pep we needed for the last little climb to the top – well the top for now. From here we went roughly north towards McGregor. At this stage we had to don a jacket and a hat as the “light winds” were a bit on the medium side of the scale.

The track is obvious in most places but occasionally we all went down different paths to get to the same point! The mist set in and the “sun shine” was nowhere to be seen – I will need to talk to Jim Hickey about that. We came across three trampers who said they had not been here before and wanted to go to Tarn Ridge Hut but couldn’t find a way around “The Pinnacles” which was about 30min away. I told them how and they would try again the next day.

It is mostly OK to walk across the ridge with limited visibility, but when you are going up and down, you can quite easily go down the wrong spur or side, so with the mist getting thicker, we checked we were going in the right direction with our map and compass and double checked with the GPS.

When we got to Baldy’s Spur, I told the other two that that was the last marked track back down and if they were sick of the weather that is the “exit” to take, the reply from George was “that’s where the wheel Chairs go”. I must admit you do feel alive up on the ridge with wind and no visibility.

It was hard going and it was a relief when the path went on the leeward side of the hill so we could get a breather without risking your muesli bar wrapper would go flying.  What would normally take 3 hours to do that section, took us 4, but that was all calculated in and we had all day to get to Tarn Ridge.

So we went across “The Kings” the highest being 1535m, Adkin and lastly Girdlestone which looked vertical as we came up to it but is just an easy scramble up. 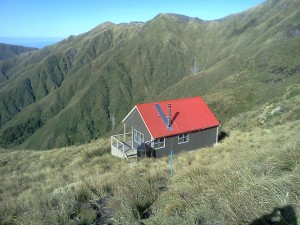 The wind was dropping and the visibility increasing by the minute, and soon we could see two trampers sitting on about 10min from the hut. By the time we got to where they were they were halfway down the hill heading towards Dorset – later on we realised that was Mr and Mrs Goodwin from WTMC as they had been to Tarn Ridge hut and, as all good trampers, filled in the log book.

After a yummy evening meal which Weimen organised, we sat on the ridge and lapped up the sun set over Kapiti Island.

The next morning we decided to leave at 7am as Maarten had to work at 6pm in Wellington.

With plenty of energy from breakfast, we motored up Girdlestone and the calm clear morning was perfect for photos in all directions – beautiful.

Coming up to Mitre Peak it looked as if there was no path, but as you got closer you could see a goat track winding its way up. From here it is knee jarring down-hill to Mitre Flats which was our lunch stop.

A quick look at the watch and a crack of my whip and we were off again heading towards Atiwhakatu Hut. I think Weimen wanted a 20 minute nap but as I had the car keys, he had to get up and go. This route is quite scenic along the river with a few minor ups-and downs.

We got back to the Holdsworth car park at 4pm on the dot, which was perfect. George said it was great, I said it was epic and Weimen said he was dead! I saw him at the club a few days later and he said he had fully recovered so all good.

It was a great loop and well organised so was a lot of fun.