After a dismal forecast predicted for the weekend, our trip was changed to plan B which avoided swims in the Eastern Hutt river that had been part of plan A. Saturday saw a 7am start for the drive to Otaki Forks. From here we walked up the Pukeatua track with Emily setting a good pace. As we were walking up this track I got a few questions about my extremely small pack (more of a day pack) and whether I had actually remembered to bring my sleeping bag.  I assured everyone that I had but as the day wore on I had to admit that I did start to have a few doubts as my pack was very small. 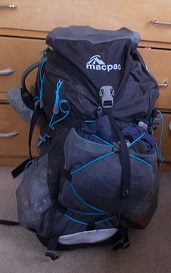 At the first stop Maarten enquired as to whether I would like my chocolate now?? This left everyone else in the group a little bewildered and amused. Why was I making Maarten carry my chocolate?? Perhaps because I couldn’t fit it in my very small pack?!! I was tempted to run with that story as it sounded pretty good but the truth came out unfortunately – Maarten had offered to share chocolate in return for me picking up his group gear. However, he didn’t realised that I had other plans…..I decided that I could perhaps use the weight of chocolate to my advantage to slow the unstoppable Maarten down so the chocolate was refused until later in the day when a little extra energy was required. A team effort was then made on demolishing the chocolate since I was making a pretty poor effort at it. 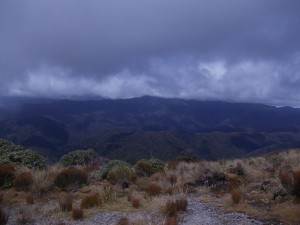 We made good progress up the track and soon reached where we would turn off the Pukeatua track onto the track across to Kapakapanui Hut. We realised that on Amanda’s older map it showed no marked track but on the newer topo maps that Emily and I had, a marked track was shown. It appeared that this was a mistake as there was no marked track aside from a few pink tape markers that were few and far between. We bagged Kapakapanui hut then started up towards the summit. It was pretty cold and windy but the wind had died down quite a bit by the time we got to the trig fortunately. 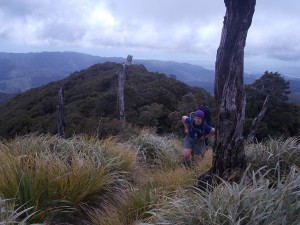 The descent from Kapakapanui had me very apprehensive and continously risk assessing as we started down as I was worried about twisting an ankle right before Kepler Challenge. I inched my way down slowly while the fearless mountain goats in the group (everyone except me!) disappeared over the side of the hill so quickly that I couldn’t even get a good photo of them before they were gone. Jessie very kindly stayed behind with me as I slid and slipped down. We continued along to Maymorn junction and the final amble along to Renata Hut. Amanda had estimated a 5pm ETA and she was spot on. It was pretty cold but luckily Jessie managed to get a superb fire started while the rest of us worked on dinner or cutting firewood. Even Maarten with his summer sleeping bag which he had to pack instead of his winter one so that he could maintain his usual pack weight to accommodate the chocolate he was carrying, declared it nice and warm in the hut that night. 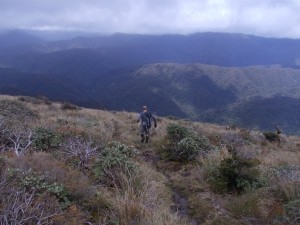 The rain seemed to have blown through overnight and the next morning we wandered to spot height 925 along the Renata Ridge track. We were turning off the track here to navigate down the ridge to spot heights 708 and 687. After taking bearings I was put in front with foot trail finding duties. This proved a little challenging in the first third of the ridge and it was quite slow travel. We then played a game of spot the pink tape markers which were only occasional – Amanda, Emily and Maarten were particularly good at spotting and pointing them out to me. It showed to me how important team work is in navigation. Not only for collaborating on decisions but the front person often has their eyes glued to the ground searching for foot trails or the best way forward while the people behind can spot the markers and keep an eye on the bearing to confirm direction of travel. 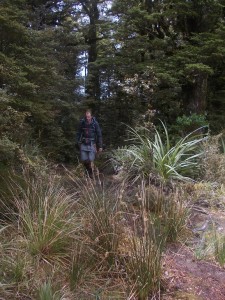 Further down the ridge we saw some foot prints showing that Debbie’s group had been along in front of us when they had wandered up to the ridge from the elusive Snowy hut. Suddenly an old four wheel drive track appeared in the middle of nowhere very unexpectedly. As we followed this old four wheel drive down it got more open and it really started to feel very much like the track out at Karapoti, especially the slippery steep clay surfaces. 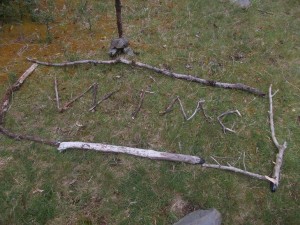 It was very satisfying to finally come out on the Waiotauru track knowing we had successfully navigated down the ridge and ended up where we had wanted. From here it was a very quick march (with Shay deciding at one stage that he might try out trail running for a few metres) back to Otaki forks to meet up with Debbie’s group stopping along the way to admire the WTMC sign they had created with sticks. 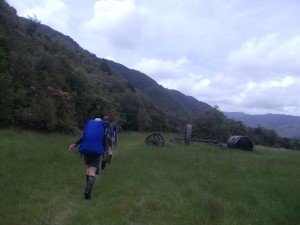