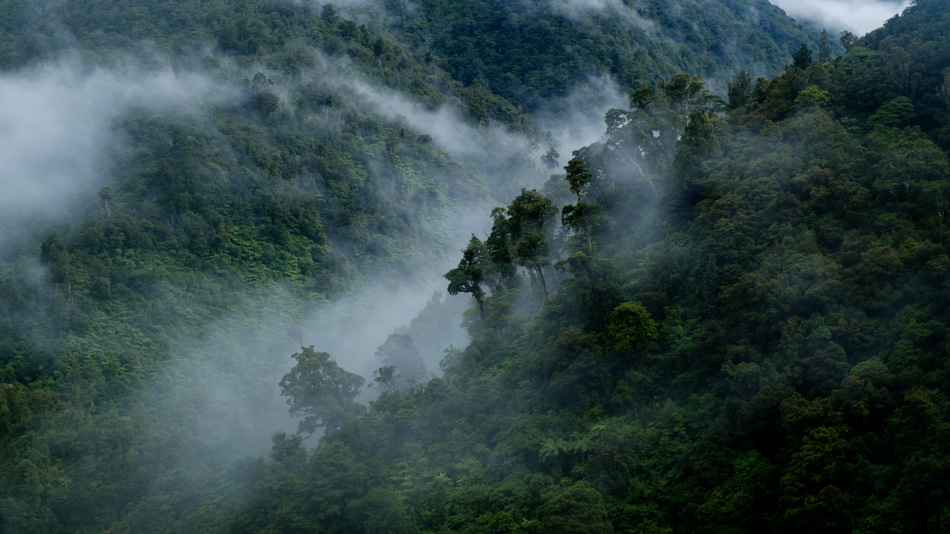 Date: February 18-19, 2017. Trip type: I think this may have been a merger of an Easy and a Medium Fit trip - Maybe it's somewhere in-between!. Location: Tararuas. Author: Ian Harrison. Trampers: Illona, Jessie, Tony S, Ian.

The weather this summer hasn’t been great, and so it wasn’t a surprise to see a forecast of thunderstorms for the weekend where we planned to tramp the Otaki Forks – Penn Creek – Pakihore Ridge – Kime – Otaki Forks loop.

And so the route evolved during the week and ended up as a less exposed option into Penn Creek via Field on the Saturday, and out via the abandoned Penn Creek sidle track on the Sunday; with the option still open to go back via the planned Pakihore Ridge route should the weather cooperate.

Saturday turned out to be a really warm and humid day. We started walking from Otaki Forks at about noon and arrived at Field Hut just as forecast thunderstorms arrived. After a late lunch in the hut, we waited for a break in the weather before continuing over Table Top and down to Penn Creek. As we crossed the tops we were hosed down by heavy, thundery showers which eased off once we were back in the bush. It was actually quite fun walking in the storm, but I was thankful the lightning stayed away from our section of ridge tops.

Unsurprisingly and happily we had Penn Creek Hut to ourselves that night. Jessie had brought some pre-dinner biscuits which we ate while reading various reports in the hut book of people who had done (or attempted) the old Penn Creek track. They ranged from an epic adventure ending with the tramper having never been so happy to see a hut in his life once he made it back to Penn Creek after failing to get out; to a brief note saying it wasn’t a problem and took five hours from Otaki Forks. There was a group who said to allow eight hours, and that the route had flagging tape and even ropes in some places. This sounded encouraging compared to the DOC “Danger!” sign guarding the start of the track which warned “For your safety, you are advised not to use this track.”

A delicious dinner of chorizo couscous cooked by Illona, and followed by a dessert of exotic Greek marshmellowy biscuits provided by Tony meant we went to bed very satisfied.

We woke in the morning to rain showers as forecast. After breakfast and packing up we started off past the DOC warning sign into the unknown. Not far from the hut we spotted the first bit of flagging tape (or rather a strip of pack liner) on a tree indicating to leave the creek and head into the bush. The track was a bit overgrown but between flagging tape and old track markers it was fairly easy to follow. After about half a kilometre we climbed up above Penn Creek and across the first slip. Looking back up to the Tararua Peaks we could see it had turned into quite a nice day in the hills. The showers had stopped and the sun was coming out. Pakihore Ridge would have been no problem but we were committed to the Penn Creek sidle track now.

Every so often it wasn’t obvious where the track went and required a bit of hunting around to find another marker or flagging tape. Illona was very good at ensuring we knew where the last marker was and not having the group blindly wander down any false animal tracks. Even though the track wasn’t great, it was always worth taking the time to find it as route finding and bush bashing off the track would have been a hell mission and very slow. Someone had put rope in on the most difficult sections; which were usually where streams had washed out the track and there was a scree bank with no hand or footholds. After three hours we arrived at the biggest obstacle of the trip; an eight metre high near vertical scree bank that needed to be climbed to get out of a stream bed. The stream was the biggest we would cross having its source just below Field Hut about 650m above us. Fortunately there was also a rope here. It would have been a real challenge finding where the track went without the rope showing the way; let alone climbing up without the rope. One by one we slowly wriggled and scrambled our way up hoping the rope was still good enough to hold our weight. Once safely up the rope we came to a big slip and could not find the track. After investigating a number of false trails we retreated to the last seen marker to realise we’d walked right past the track near the bottom of the slip.

We were making steady progress and the hut book entry that said to allow eight hours seemed about right. However, it was still difficult in places and Tony had a slip, cutting the palm of his hand badly enough that we needed to stop so he could get it cleaned and bandaged up. Everyone was happy to stop for a rest as it had turned into a very hot and humid day. I was soaked just from sweat but the bush was also damp from the recent rain. It’s the closest I’ve felt to being in a tropic jungle.

After four or five hours we stopped for lunch on one of the bush covered terraces above the Otaki. The terraces were swampy but it was nice to have a change from the steep crumbly sidle track. The rest of the track from here was less difficult and easier to follow than the pre-lunch section; with the exception of the last slip, but by then we could see we were close to the end.

Normally when I walk out to Otaki Forks I’m sick of the hard track and just want the last bit to be over with. This time when we came out onto the track above the Forks I really enjoyed having a nicely formed path without needing to do any bush bashing and route finding. We arrive at the car seven hours after leaving Penn Creek Hut having had a challenging but fun adventure.

Thanks to everyone for the good company and specifically Illona for organising and leading the trip, Tony for the use of his car to get us to and from Otaki Forks, and Jessie for the biscuits, additional first aid supplies and giving me a ride home from Wellington.