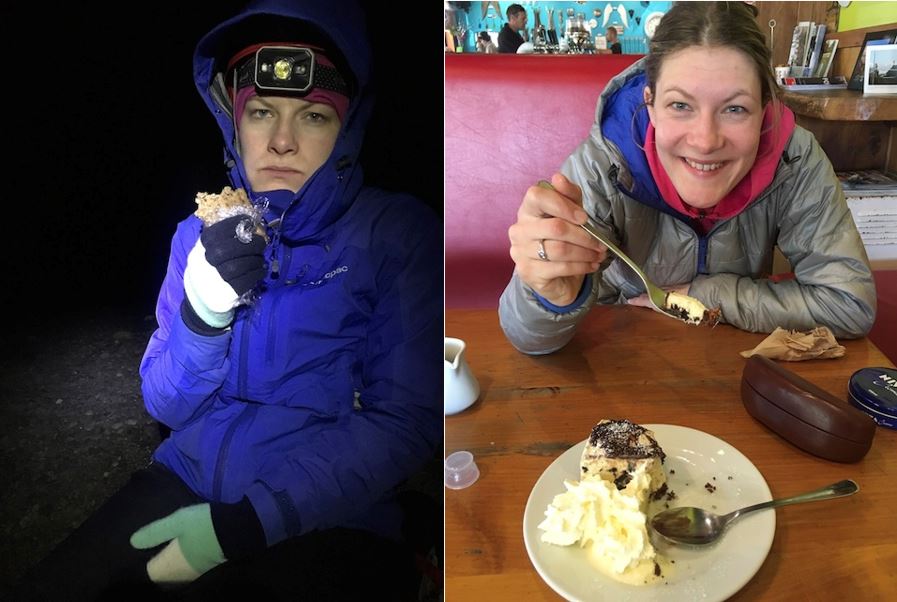 We had this trip on the schedule back in July, only for it to be scuppered at the last minute by rubbish weather. There were only two months this year where the full moon fell on a weekend during the snowy season, and they had now passed. We’d kept this weekend free just in case an opportunity came up to do something, but it wasn’t until the Thursday morning before we decided to go. Unfortunately none of the original punters could make this one at such short notice.

We booked ourselves one of the last double rooms in National Park so that we could have a nice comfortable start to what would be a very long day. Given we had no transport arrangements in place, we decided to kill two birds with one stone and use the weekend as training for our stamina and fitness. We stayed the night at the Adventure Lodge & Hotel, who did a fine job of providing a cheap comfortable room and superb breakfast the next morning.

We parked up at the Mangatepopo road end at just after 10am and were on the trail at 10:20am. A brief stop at the hut to sign our intentions was the only interruption to a speedy burst to Soda Springs and beyond up the Devil Staircase. It was sunny and clear, but windy, and at times quite cold.

We turned off at the start of the South Ridge to Mt Tongariro and took on the whole ridge line which was very enjoyable. Being Spring, there’s a lot less snow now so the tops were a mix of snow plodding and scrambling over rocky outcrops. We weaved our way half way up before stopping for some chocolate and putting on the crampons where it all firmed up. The last 200 metres is a nice snow slope all the way to the summit. We arrived there at 1:30pm, 3 hours after leaving the car.

At the top we met a group of Lithuanian tourists, who had come up via the main ridge from Red Crater. They were keen to descend down the South ridge but we managed to talk them out of the idea on the basis that they too had no alpine gear and that it was a lot icier than the well-worn route they had ascended.

From there we got back onto the main crossing route, stopping at Red Crater for a look and then heel plunging to the Emerald Lakes, which were still mostly frozen over. Past the central crater, out to the switchbacks and our final break at Ketetahi Shelter. By this point I was starting to hit a wall; we talked about staying there until nightfall but it would mean a good 4 hours of sitting around. So we packed up and walked all the way down to the road end in a total time of 6 hours 40 minutes. There we treated ourselves to removal of boots and socks for 10mins, and Elisabet put on some plasters for a few rubbing spots. Then we started back up the trail.

We stopped just 10min in where the trail meets the stream, and there we boiled some new drinking water and had some freeze dry meals. We spent a good 45mins resting and preparing ourselves for round 2. By the time we were on the move again, the sky was red with sunset and the darkness was beginning to descend on the forest. Regretfully we were about 30mins too late in getting up and above the tree line to see it in all its glory. Ketetahi Shelter was reached at 7:45pm by which time it was completely dark. Minute after minute more stars began appearing in the sky, and before long we could make out the streak of the Milky Way above us.

The moon, whilst not completely full, was huge and oh so bright. We used our head torches for no more than 30 minutes on the entire crossing; we simply didn’t need it and it ruined the atmosphere anyway! The food at the bottom had given us our second wind and so the return back up the switch backs to the Central Crater flew by. Crampons back on and a walk direct across the crater took us to a nice steady spur to the West of Emerald Lakes – one that we had scouted out on the way over as a nicer escape to the Red Crater. We were really starting to fade now but the beauty of the isolation, silence, and majesty of the environment kept us powering on. Neither of us are keen photographers or possess the technology to even try, so you won’t find any spectacular evidence of this part of the trip. What I will say is that I feel a sort of poetic justice in this because like most mountain scenery, there isn’t a photographer/videographer in the world who could truly capture the feeling of being there in those moments. Through all the aches and pains it was impossible not to feel completely at one with the world around us, part of the stillness. It really was breathtaking.

We turned the torches on for the descent into the South crater, to ensure we made best use of the fixed rails/chains in place – it’s quite uneven under foot at this part. An absolute slog across the crater and down the Devil Staircase and we stopped at Soda Springs for one last breather. The final 3km to the hut was monotonous, but simple given the awesome walk boards they’ve put in most of the way. We arrived at the hut at just before midnight, and fell asleep as soon as our heads hit the pillow.

The last time we did the crossing was January 2015, long before either of us had taken up tramping or mountaineering. That following day we could barely walk as we were that tired. So I was quite happy to be in a much better state after two crossings this time around. We strolled out the last 1.5km against the flow of tourists setting off. We drove over to Ohakune and treated ourselves to a massive breakfast (including cheesecake), and then drove back to Wellington to wash the gear ready for next week!