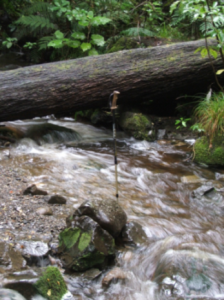 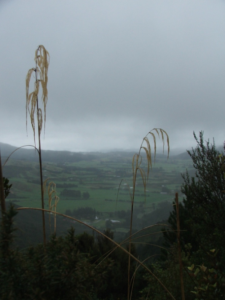 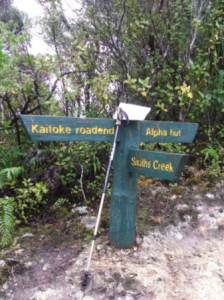 It had been a while since I’d headed into the hills, and my feet were getting restless.  The Tauherenikau Valley is the primary reason that I’d joined WTMC after unintentionally spending two nights in the open, without a fly or sleeping bag, in horrendous conditions (including snow), several years earlier.

It was time to face my demons, and Tutuwai Hut had finally made it on to my agenda again.  I calculated that if I left Kaitoke by 2pm, I would have plenty of daylight to make it across the bridge, possibly with some left over, and it would then mean that I would be on the same side of the river as a proper hut, rather than only Smith’s Creek Shelter as an option.  I fully expected to be walking the last hour or so in the dark, but that would just make things interesting.  I wasn’t wrong.

I set off up the Puffer, having a very pleasant time as overcast weather meant that it was not too hot. The sound of gunshots somewhere along Marchant Ridge made me slightly nervous as one female Hutt Valley teacher has already taken a bullet.  However, I was soon counting the steps down to Smith’s Creek itself, the sound of man faded, and replaced by the occasional twitter of a bird.

Around 145 steps later, and the gradient flattened to a lovely undulation, occasionally interspersed by a random beech tree which decided it wanted to lie down across the path.

I reached the Doc sign which advised of a slip ahead, and offered an uphill route around it.  Having done both routes in the past, I opted for the slip, as it would save me precious daylight.  I noted, however, that someone had scratched “girls” on the sign, implying that Doc workers and girls should take the detour.  With my grey hair, I wondered how old I had to be before I qualified as a woman, shook my head at the (presumably) male whose ego drove him to ignore safety signs and treat women disrespectfully, and the futility of the actions of a (presumably) female that had scratched out “girls”, putting “trampers” in the direction of the slip.  Even in the wop-wops, the battle of the sexes cannot be escaped!

I walked on, enjoying the beauty of my surroundings, crossing a few side-creeks and generally having a wonderful time.

Eventually, I reached Smith’s Creek Shelter, and stopped for a brief break by the river in the sunshine.  Time was marching on, and I needed to, as well.   It was not long before I reached the “new” bridge and crossed the Tauherenikau River.  It simply looked beautiful.   It most certainly wasn’t flowing at full capacity as we had not had rain for some time, being perfectly passable via a river crossing if required.  Nevertheless, rain was forecast, and I didn’t relish the idea of sleeping outside, so I didn’t tarry for long.

The track temporarily headed away from the river, and then uphill.  I was now on unfamiliar ground and did not realise it, but was on another Doc detour.  The track became dodgy, and I carefully moved forward with only a fallen log holding me up a steep bank.  The log stopped, and so did the track!  I looked over the precipice to see the last thing I wanted or expected.  An orange triangle telling me that I was in the right place.  I figured that I had squished a sandfly at some point, angering Tane, and he was taking it out on me via Doc workers carving out ridiculous paths!  It was far too steep to even consider using my walking pole at this point, and I abseiled down using the branches of a poor tree that had succumbed.  I kept going, cursing Doc and the government.  I then came across the intersection with the original path.  I noted it, promising myself that on the return journey, I would at least check to see if the original path was less precarious, as indeed, it was.

Light was fading now, and extra care was needed so as not to trip.  The erosion from the river was obvious, with several absolutely gigantic slips having swept away huge chunks of both land and track.   I finally admitted that darkness had fallen.  At this point, I just wanted it to all be over as quickly as possible.  I trudged on.  And then, opening out onto Slip Stream, the track completely disappeared.  There were no orange triangles, and knowing I did not have far, I took a punt as to where the track might be.  And another.  And another…   It turned out I was no more than six feet off the track, and in plain sight of it – if it were daylight!  After a number of attempts, I realised that I had the option of 360 degrees, and only one was right.  I cursed Doc and the government again (anyone except myself for not leaving home earlier), and headed to the river.  I walked upstream for a few hundred metres, and did a 90o turn in toward the track.  Within less than a minute, it appeared, and all was well again.  But only for a moment.

It was then that the path suddenly elevated itself 5 feet, re-starting on a new plane with a floating rock.  Initially, I was highly impressed with this feat that defied physics, until it sunk in that I too, had to somehow raise myself to new levels, perhaps by growing wings.  Yes, the orange triangles insisted I was still on the right path.  I cursed Doc once again, and, using muscles that no lady should even know exists, let alone have to use, I somehow shimmied up the vertical.

Surely, I thought, the hut could not be far away?  I pushed on, grateful that I had thus far escaped the bad weather.  I must have disturbed a deer (or possibly goat), as I heard it running off into the night.  Once again, the track came out into a grassy paddock, and disappeared.  I was about to curse Doc once again, when in the gloom, I saw a shape.  A simple sign that said “HUT”!

With detours and disappearing trails, it had taken me four hours to get there from Smith’s Creek, but I had made it!  Reading the log book revealed someone stopping just two minutes short of accommodation, so I considered myself lucky to have arrived.

I should make a note about my meal.  I had taken in 2 minute noodles.  Light, quick to make, and not much space in the pack.  I had also taken in a treat for myself.  A (glass) bottle of organic lemonade.  It was not until I actually saw them next to each other on the table that I realised the absurdity of it.

While eating and generally relaxing I unexpectedly had company.  Someone had arrived with a huge bang and crash… then silence.  Investigating, I found myself looking at a fine specimen of a male.  Possum.  My night was occasionally disturbed by the noise of possums running about on the roof, the pitter patter of mice, a bird in the roof whose sleep was also disturbed by something, and roaring deer.  As a precaution, I waited for the daylight to clean my teeth.

The first intermittent spots of rain did not arrive until I left, at a rather genteel 10am.  Heading back the way I had come, everything was so much easier in the daylight (teaching me a lesson)!  It was all rather pleasant apart from the rain which finally arrived at Smith Creek Shelter.   Sadly, the shelter is looking rather the worse for wear with toetoe and holes in the gutter, and rather dark and dingy on the inside.  As recently as 2010, Jonathan Kennett published his book “Tararua Adventure Guide” and described the place as a “bit of a dump”.  Perhaps a suggestion for a working bee would be to create some sort of a skylight (perhaps translucent plastic) which would help to lighten the whole place up and make a huge difference.

I put on my wet weather gear, stood up, and walked outside to find that it had stopped raining again.

The rest of my journey was completely uneventful, except for a blister that developed on the bottom of my foot.  I have relatively new boots and I’m still getting used to their idiosyncrasies.  It took me approximately an hour to limp my way from the top of the Puffer back to the road end.

The WTMC (and other tramping clubs) has done an excellent job of promoting safety and bush skills, if the most exciting thing on my trips these days is a blister, and only a few minutes of geographic difficulty.  My thanks to all who have contributed to my education with special mention required of Sue Walsh (trip leader mentor) and Ruth Parnell (bush craft mentor).