The eight of us met at platform nine at 5 pm in an attempt to get away for a slightly early departure for the long drive up to Taranaki. Despite our best efforts, including Dan sneaking out of the office while his boss wasn’t looking, a crash on SH2 and then roadworks on SH1 meant it took us almost two hours to get to Waikanae. What evs. After the standard dinner stop in Bulls we canvassed our options for the next day: according to “the Norwegians” we had a short weather window on Saturday morning before it was expected to turn bad. We had planned to walk into Holly Hut when we arrived, but our best chances to get to the top were to either walk up that night and summit in the dark, or grab a few hours sleep near the visitors centre and get up early and hope we could beat the weather on Saturday morning. Sarah found the first option hilarious and thought we were mad. This is from the woman who planned to run 80 km around the mountain tracks by herself. I know who I think is madder! Eventually we decided to take our chances the next morning after some shut eye.

We got to the “campsite” at the bottom of the road leading up to the visitors centre about 11pm and set up the fly. Tony and I found little nests under the trees. Tony woke in the middle of the night to some rustling around he thought was me. It wasn’t. Eventually he worked out it was a possum and threw something at it, before promptly falling back asleep. The next morning we woke to a completely empty packet of toffee pops. I bet that possum has a sore belly. Tony woke us up shortly after 4 am and we were on the track up past the visitors centre as first light gave Mt Taranaki a reddy glow.

Sarah ran on ahead with plans to maybe see her at Holly Hut that night if she made it that far around, or at the road end at 3 pm the next day. Plodding our way up the North Egmont summit track it was all pretty straight forward until we got to the scree slope on the summer route, and then progress slowed a little as we struggled to get good footholds.

Rockhopping up the larger boulders above the scree was good fun and the snow had melted so much that the rocks took us nearly all the way into the crater before we needed our crampons. A tricky move on the hard ice at the final ledge with an exposed drop off meant not all of us could get into the crater: the group split and four of us continued for the final ascent to the summit. 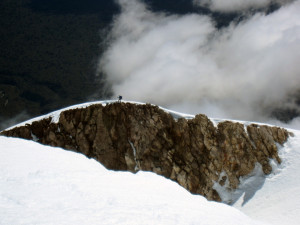 face and then edged along the top to try to avoid the patch where crampons were needed to descend into the crater. Having done all the difficult work he turned back half-way up the final ascent, and was heard complaining on the way back down that it was because we hadn’t kicked steps for him!

We all took different routes to the top and were rewarded with beautiful views over the Sharkstooth to see Mt Ruapehu poking up its head in the distance above a sea of clouds.

While on the top we saw the first few clouds convecting upwards and after a quick exploration of the crater the mountain was soon shrouded in mist – we’d only just made it! Glad that the 4 am start had been worth it we began our descent to the carpark, getting there about 3 pm. We stopped in for a much needed coffee at the visitors centre, shuffled around our packs to exchange metal for feathers, and eventually got ourselves onto the track towards Holly Hut.

Andre took off his gaiters halfway along the track and I cracked up laughing at his rooky error that meant he had a wicked gaiter tan, quietly congratulating myself on the fact I’d been applying sunscreen all day. Shortly after I decided to ditch the gaiters too only to find I was similarly marked…apparently I hadn’t been quite as diligent as I’d thought! We had a feast of mac and cheese at the hut and passed out soon after.

The next day we were to meet Sarah at the Visitors centre at 3 pm. This meant we had time to do the Pouaki Circuit if we wanted, though in the end heavy rain just before we were due to leave put us off. Shortly after we made the decision to hole up at Holly Hut for a while, another tramper staying at the hut saw a runner going by around the time we expected Sarah to get there. Convinced it was her in some adrenalin pumped runners haze that meant she hadn’t stopped in to sign the hut book or see if we were there, we packed up early and headed out after her hoping to be able to get away for an earlier departure to Wellington.

On our bedraggled arrival at the visitors centre there was no sign of her, and cursing her name and making up all sorts of stories about what she’d done we settled in for coffees and crosswords, with Tony threatening to leave on the dot of 3 if she wasn’t there. Sarah bounded in about 2.30 and cleared her name – the runner seen on the track hadn’t been her at all! All was forgiven and we bundled into the van for the trip back to Welly, another great “Tony trip” under my belt.