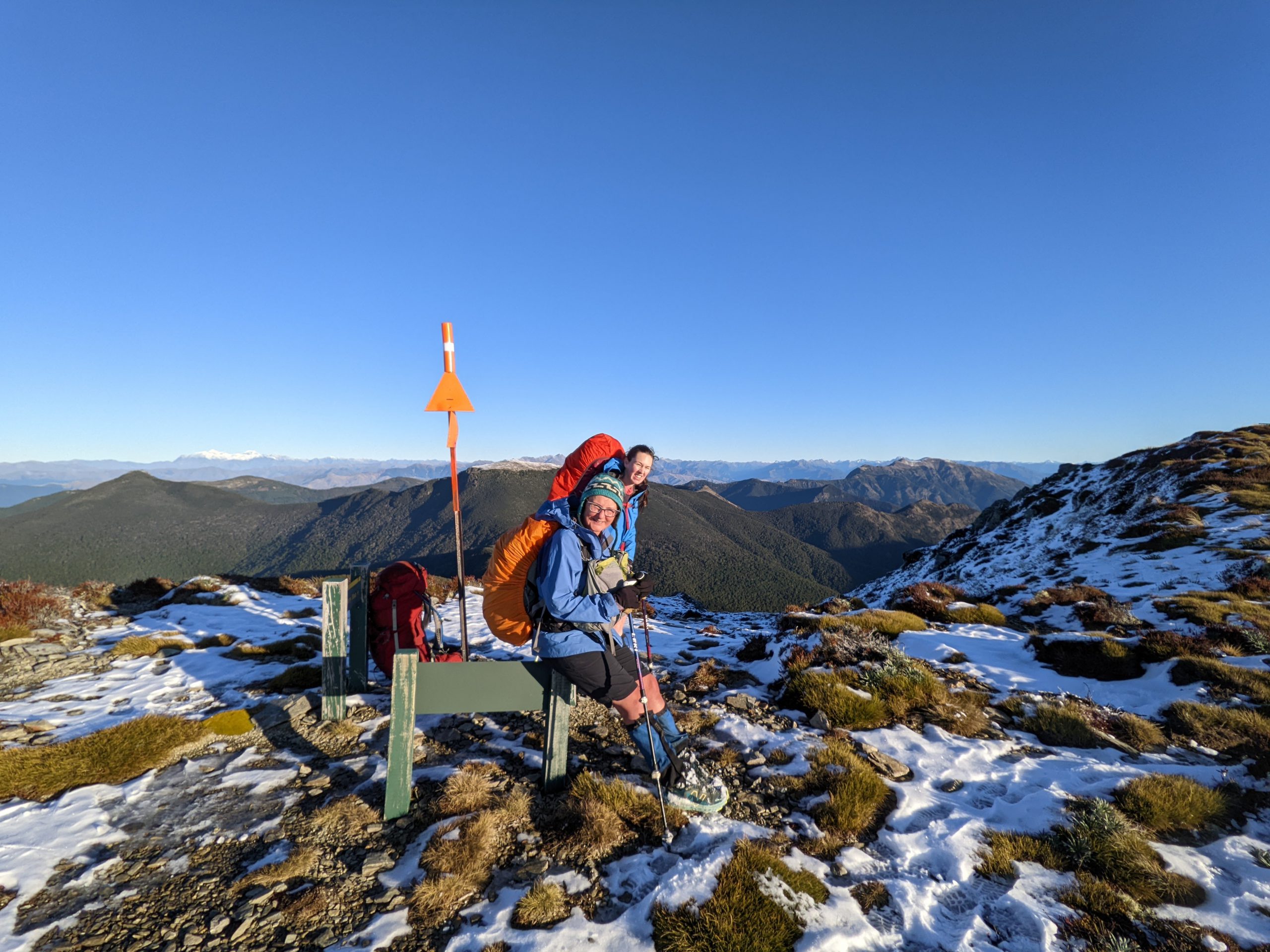 Friday night, the ferry arrived early in Picton, which we quickly found out doesn’t show movies on long weekend evenings (due to lack of demand!).

Next morning, the E-M group we were sharing the van with kindly agreed to being on the road by 7.30am. Nearing the Richmond Ranges, we saw the rewards of the freezing night (fortunately, spent in the warmth of Top 10 cabins) – lots of snow low on the mountains.

After the long and windy drive following the many ‘Lake Chalice’ signs and wondering at various corners where else we could be going as turn-off options were limited, we arrived at a snowy carpark.

We left the E-M group there and arriving at Lake Chalice hut about half an hour later (down an almost 4wd track) to see the mountain we were aiming for largely covered in snow.  Options A to D (developed in response to the weather by our leader) were outlined again. The original plan (A) going to Old Man hut first instead of Mid Goulter was agreed with Option B (part way if the snow was too deep or dangerous) in our back pocket.

The first section around the lake, which looked flat on the map, as with much of New Zealand, was quite undulating with some debris at points to walk around. After about half an hour or so, it started going noticeably up. And up. And up. After only a few hours we were into a winter wonderland with snow well into the bushline. Beautiful, but also very wet as snow melt off the bushes.

Our first glimpse of the views at about three hours in had brought huge joy to us all. Even more beautiful than we were expecting! (see photos)

We had lunch just before Old Man, the start of more open mountain views. Prematurely celebrating when we made it to our high point (near the 1522 peak), we made it to the spur following the snow footsteps of the couple who had left from Lake Chalice that morning.

Soon we were back into the bushline for a steep, constant descent of over 200m – a taste of the track to come. The snow was starting to melt in places and icy and muddy in others but with soft, safe landings among the beech trees.

Then up again to the saddle – where we were spoiled by spectacular views in almost all directions. We joined up with the Te Aroroa trail and started to understand why many say the Richmond Ranges is among both the most beautiful and challenging parts of this trail. We slowed down in some semi-exposed patches where the snow and ice made us take extra care. A little bit of scrambling over some rocks to add a bit of adventure and then taking in our final mountain views.

As the sun started setting we made it to our final turn-off into the bushline heading steeply down to the hut – this one more than 200m in about half a kilometre. Torches on as we hit dark for the last 20 minutes before the welcome sight of the 5 bunk hut.  We were welcomed by the couple whose steps in the snow we had gratefully followed, three tired trampers were ecstatic to find three spare bunks and to see the fire being built.

After companiable hut chatter, we went to bed about nine expecting a long rest given our short day on the Saturday.

That was until about 1.30am when we found our hut mates in action.

She was reading in bed. He was making a cup of tea on a loud jetboil.  White headlamps and discussion were needed by the two.

Coming back from the toilet, I whispered to Monique how spectacular the stars were. Her expression in response made it clear that she also thought that she’d woken up to some parallel tramping universe.

Shortly I regained my top bunk, with maneuvering the ladder made easier by all the bright white light.  Unfortunately, Monique was like a blinded rabbit in his reading light – with the unlatched door adding whiffs of cold air next to her head to add to the atmosphere.

In the morning, we heard them loudly and enthusiastically readying for their early start back to Lake Chalice (which they had kindly apologised to us the night before). While there was no sound of plastic liners, we lay through minutes of what seemed like the filling of magic bottomless packs.

Just after 8am, we had the hut to ourselves. After breakfast, and some photos – and finding the nearby Tarn, we started (just on 9.30am) for Mid Goulter hut.

The first hour was a long, steep (900m) down to the river. Our knees and poles were glad to reach the tributary of the Goulter River. The next few hours were “beside” the river (at least on the map). Mostly slightly above the river, with some short dips into and over various creeks, with dry feet soon becoming something in fairy tales. With the rains earlier this week, we were a little apprehensive about our two crossings of the main part of the river. The first was very cold, thigh high in the deeper but calmer sections we opted for. The second seemed slightly colder and higher but safely over just as quickly.

After about three and a half hours from the hut, we finally made it to the junction to Lake Chalice hut. From here, we had a sense of our next day – some nice smooth sections interspersed with patches of debris, and logs of inconvenient height to go over, under or around. Only a few hundred metres from the hut, a few rain spits and a last river crossing for the day (river name) a shallow steady flowing stream.

We arrived to an empty hut, with only five minutes to spare before the rain set in properly. Our wood collecting, fire building and lighting skills all well used. Most of the rest of the day was spent reading, chatting, cooking and eating as the rains set in solidly.

Next morning the weather cleared just before we left, offering us a beautiful rainbow. It threatened to return as it drizzled when we left but right on nine it stopped, again exactly as predicted in Monique’s weather forecast.

The next three hours was more meandering above and along the river – noticeably up and flowing faster.

After about 2-3 hours of wandering similar to our last stretch the day before, we reached Lake Chalice loop track with the sun gleaming on the lake. Perfect timing for lunch and photos.  A mostly easy walk back to Lake Chalice hut, although a few ruts in parts to keep things interesting. Our final note in the Lake Chalice hut book saw us slog our way up – and up – back to the carpark.

We were very pleased to see the E-M group – now expanded to include Mary who they had met in the hut before.

With boots off, just as we thought it would all now be an easy cruise to the ferry, we learnt about the broken step on the van meaning we would all have to climb in via the front doors. The adventure continued with Kiwi ingenuity. String bungy cord and cable ties all playing key roles in helping keep the step attached (and the door closed) as we rattled through the rough track from Lake Chalice for well over an hour – including periodic stops for repairs on our system.

Hanging on by a thread – WTMC skills in action. Photo credit: Maj-Britt.

Finally all of us – and the van – made it in Picton sort of in one piece. Just enough time for a luxury show and dinner before the ferry. We made it back in Wellington not long before midnight all set for more bright dreams and snow white tramping adventures.