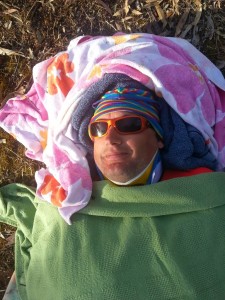 Randonneuring has many great rides organised by sister clubs around the world. Often, these rides are not only scenic but place us among creatures of which we are unfamiliar. This year, while travelling to 1200k events I have unintentionally cycled with moose and caribou, hiked amongst the grizzlies and wolves, camped out with black bears, and sea kayaked near(ish) killer whales.

Next up was short excursion to Australia, a land known for the presence of creatures with both poisonous and large jaws. From the worlds most toxic snake, the inland taipan to the more common eastern browns, which are responsible for more human deaths. Add to that the redback and funnelweb spiders and the large jaws of the saltwater crocodiles and great white sharks – it’s a dangerous place out there in the outback.

Ultimately, my short excursion to Australia for the Sydney to Melbourne 1200 had more thrills and spills than expected. Having not dropped my road bike for two decades, I first had a blowout at over 70km/h descending the Great Dividing Range, which whilst scary fishtailing on the rims, only led to two small grazes and a damaged steed. Eventually I was rolling again, although shaken up and under some time pressure, thanks to some assistance from Chris Walsh & Graham Carthews including his spare wheel and a little patching up from Tom Aczel. 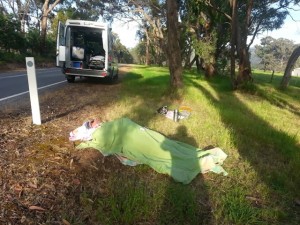 While I had been eliminated due to the timecut, the ethos of randonneuring is of self-sufficiency, so I pushed on with the aim of riding onto the finish in Melbourne. Unfortunately, while descending toward Mansfield at ~30km/h, I came to a rather sudden demise from one of the few species in Australia without a fatal bite. Lurking in the woods had been some cyclist destroying marsupials. With their extra tough posterior, the wombats were launching themselves across the road like missiles. I had slowed and drifted left to allow one of these missiles to cross in front of me. And out from the woods, aimed straight at my front wheel like a heat seeking missile came the second. With nowhere to turn, my last thought was “I am not crashing again. This is not happening!”.

Then it was time to pick myself up off the road (again) feeling a little sore. Whether it was due to adrenaline or male pride, I was oblivious to exactly how much I had hurt myself and without any cellphone coverage I continued on, for at least another 200 metres before admitting some pain to myself and putting on my warm clothes and stopping for a rest. I should have pressed the SOS button on my SPOT tracker instead, but I was only a little hurt, right? Shortly following, with the pain in my ribs more evident, I could not back up.

I had been expecting some riders behind me, but they had opted for a sleep back in Whitfield, so it wasn’t until a couple of hours later that I heard them fly past, probably thinking I was sleeping. A few minutes later Annette Whitton drove by to ask if I was alright, “Ummm, No”. Shortly after which, Tom Aczel was summoned to patch up his loyal customer again, and then the ambulance service, which delivered me to Mansfield Hospital.

As proof that it is stopping that hurts more than the crashing – this lower speed crash resulted in five fractured ribs and a grade 3 separation of the AC Joint in my shoulder.  Following the crash I was looked after by a fellow club members in Audax Australia. A special thank you to Tim Laugher and Pat Dorey for taking such good care of me until I was able to get back to New Zealand.

A version of this article appeared in Audax Australia’s Checkpoint Magazine No.58 – Summer 2014.