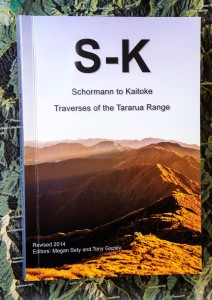 The long-awaited moment is here – the launch of the newly revised and updated Schormann-Kaitoke book!

The S-K (Schormann to Kaitoke) book is an anthology of S-K trips recorded by trampers and runners. First published by Lindsay Cuthbertson in 1997 and now updated to October 2014. The book records the first attempts in 1961 and successes in 1963, and beyond. Available from Bivouac Wellington store for $15 starting early November or at the launch.

On 3 December at 8pm, at the WTMC club social night, we’ll officially launch the revised and updated SK book. Hear first-hand from many of the people who have completed S-Ks over the years, and have been involved in tramping, mountain running and working on the book itself, including:

Autographed copies of the S-K book will be available on the night for $15.

It was 1961 when the idea was first conjured up to traverse the entire length of the Tararua mountain range from North to South in a weekend. The plan was to start on Friday night from the Schormann roadend and finish Sunday evening at the Kaitoke roadend; hence the ‘SK’ symbol. The Schormann roadend no longer exists and current punters must start at the Putara roadend, but the name has remained the same. The first successful attempt was recorded in 1963. Since then, dozens of trampers from local clubs and beyond have attempted the feat, via the Main Range, Tarn Ridge, the rivers or in reverse and succeeded. For more information about the book or launch, contact Megan at .