What’s better than going up a mountain without having to walk to its foot? Yes correct – going up lots of mountains without horizontal walking. And that was basically the entire plan for this trip. 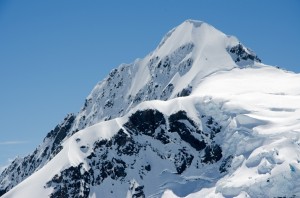 We flew down to Christchurch on a Saturday morning, hopped into a rental car and drove down to Ashburton to fill up our food supply. You usually spend a lot of time thinking on what you really need and how heavy everything will be in the end, but not when you’re planning on getting an air-taxi, that drops you and all your crap at the hut. This probably saves your shoulders from a lot of pain, but you can still screw it up in another way at the supermarket – we ended up with a huge bill and our biggest fear for the rest of the week was how to eat this pile of food just so we wouldn’t have to carry it out at the end.

After our power-shopping session, we continued our way down to Mt. Cook village and Mike soon found out that the airport considered the weather good enough to give us a lift up to Tasman Saddle today, which, not surprisingly, is at the top of Tasman glacier. The flight in was quite exciting as it was the first time for me to fly in a chopper, and Mike somehow managed to get us two front-row seats, pushing the view-hungry tourists into second row. 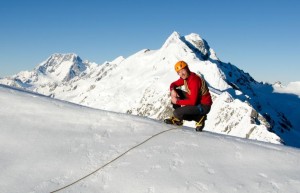 urists, we finally landed close to Tasman Saddle hut. Five minutes later, we were in the hut, breathing heavily from the exhausting walk (and from dragging a 100kg food bag behind us). The rest of the day was spent with drinking tea, reading books, and shooting photos.

Next day, the weather forecast wasn’t too good, so we stuck to our books and later in the day walked up Hochstetter Dome (2810m) by somehow making it through the crevasses at its SW face with poor visibility. After being quite certain that we arrived at the top, we went down the normal way along the SE ridge.

On day two, we got up early to do Mt Elie De Beaumont (3109m). The plan was to do this as some kind of warming up route, but it turned out to take longer than expected – in fact it took us almost 12h (5h up) to get to the top and back to the hut again. Main reason for this was that the south face was heavily crevassed and despite very good visibility, finding a way through them turned out to be quite tricky. The climbing itself was of moderate difficulty, and we could reach the 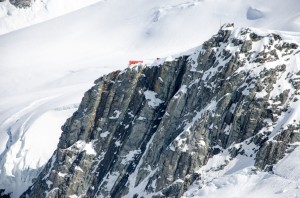 summit without having to bother with building fixed points.

On the way down, we back-tracked our steps, which finally led us to the main difficulty during our ascent: a 4m broad crevasse with a bridge over it and a slightly overhanging 4m vertical step. On the way up, we simply crossed the bridge and climbed the step, which was doable although really exhausting because I had to dig through a meter of soft snow while holding my body weight with the other hand. On the way down, the plan was to build a T-anchor and abseil on top of the bridge, and that’s what we did. What we didn’t expect though, was that when adding even just slightly more weight to the bridge below, it would collapse, and that’s what happened. So the lucky one who abseiled first (Mike) had to make his way up again along the rope, while making comments that mainly sounded like F***. I can’t recall the last time I’ve seen somebody with such a red head. But as funny as the situation was back then, we still had to find a way across this main crevasse, and we could see the clouds rising which, once at our level, would reduce our visibility down to a few meters, which isn’t exactly what you want in such a situation. 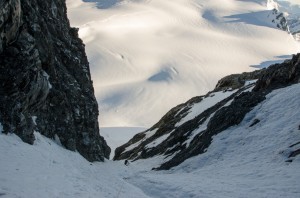 First we thought of abseiling at a point where the vertical step is higher so that the overhang would get us to the other side of the crevasse below, but we couldn’t tell for sure how far the rope would cut into the snow and whether we would end up dangling above the 30m deep crevasse with no chance of reaching the other end or not. So we finally followed the edge towards the rock face of Mt. Walter, traversed some avalanche debris that had come off the rock face, and downclimbed a small waterfall to get to a much more solid bridge, which ultimately allowed us to get down.

The rest of the way back was spent under 2m-visibility conditions, and I was quite glad that Mike had his GPS. Although not precisely walking in a straight line (when looking at our tracks the next day, one might think that we must’ve been pretty drunk) and running into crevasses more than once, we finally made it back to the hut.

Because our easy day had turned out not to be that easy after all, we decided to have a rest day on Tuesday and simply took a stroll over to Kelman hut followed by some pitching up to Mt 9144. I made the mistake and agreed to ma 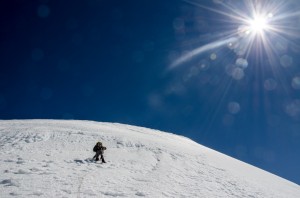 ke Mike lead pitches one and three, so he was the one to run into a snow-stake, a quite new ice screw, and a Balakov tool – lucky bastard! Especially the tool should serve us well just 3 days after…

Day four, Wednesday, was reserved for climbing Mt. Green (2837m). Although lower than Ellie, the face was quite steep and I found it hard to decide whether to use fixed points or not. We climbed the South face almost to Divers Col, had a short break there, and then continued on to the top, circumventing a crevasse that went around almost the entire SW face to the true right. Quick photos at the top, some hero poses as usual, and then we went down again, this time simul-pitching the SW face and traversing the crevasse at its bottom to the same point were we got up. We then went down the SE glacier face as it was less steep and less avalanche-prone than the S-ridge and traversed back onto the ridge at a height of 2200m.

On day five, Thursday, we wanted to climb Mt. Annan (2934) via the main couloir but soon r 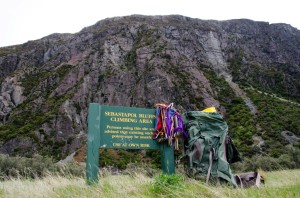 an into problems with rocks and stones constantly falling down the gully. We climbed the first two pitches of probably four to five but then decided to turn around as major holes in our helmets wouldn’t look that great when coming home – and it definitely was the right decision – while abseiling, the rubbish that was coming down just got bigger and bigger.

Later the day, back at the hut, we managed to get a cheap flight out for Friday lunchtime, and this was good timing as the bad weather was expected to arrive on Saturday. So the next day, we got up early again and did Mt. Alymer (2699m) (I believe we found the steep bit in its face that people were talking of) and then followed the ridge-line to summit Hochstetter Dome a second time. On the way down, we had a quick chat with members of an instruction course at Lengenfeld Saddle before returning to the hut and enjoying bacon and eggs one last time.

After the chopper dropped us at the airport, we checked in at the Youth hostel and 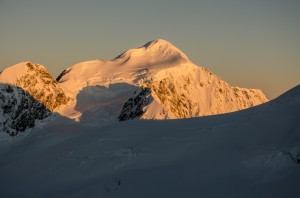 had an extensive shower first before doing anything else. Later, we popped by the Sebastapol bluffs to get some fun rock climbing done. After the climbing session and while going back to our car, we saw a chopper just flying by our noses, heading up towards Mt. Kitchener, potentially searching for some troubled trampers. A couple of minutes later, we found out that we actually know these guys the chopper was looking for and went to the emergency service station to look after them. Luckily, they were not injured, and after waiting for them completing some paperwork, we gave them a lift to the Youth hostel and later enjoyed a couple of beers at the Mountaineer’s cafe to conclude a brilliant week.