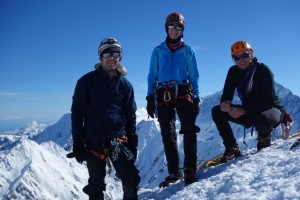 “Footstool? You really wanna climb a mountain with such a name?” – that was pretty much the reply I got from my boss when asking for a day off late October. I usually don’t care too much about mountain names, but I had to admit that it is a weird name, probably originating from its shape.

So despite the name, I was really looking forward to this trip as it promised a peak in a way I like it: mainly going up a mountain without wasting a day or two to get to its foot (i.e. not 50 but 2 river crossings, even with a bridge).

After flying down on a Friday evening, spending the night at Tekapo, we arrived at Mt. Cook Village early Saturday just to have a coffee first while taking a closer look at our target. At first covered in clouds, it soon revealed its face, and, compared to Sefton’s SE face, it looked quite doable! So off we went, first following the quite tourist-hunted Hooker valley track but soon turning off towards the Footstool. I started ascending the mountain in a rather straight line following the vegetation where 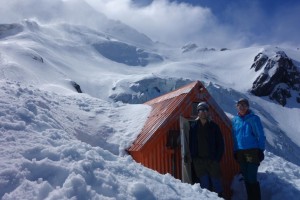 as Sharron and David turned true right to follow the main scree slope. I somewhat expected to run into steep terrain further up and to cross over to them, but somehow made it to Sefton biv following avalanche slopes all the way. That gave me enough time to free the shelter from snow and bring us back its window before my two party members turned up.

The rest of the day was spent sitting in the sun, enjoying the marvellous views, and doing some more snow-shovelling just for the fun of it. Later that day, two more parties (4p and 2p) turned up and gratefully accepted our offer to sleep under the bivi rock while we chose the far less comfortable bivi hut. The 7pm radio call was still talking of good weather the next day, so we set the alarm for 4am, well knowing that our friends sleeping under the bivi rock would start their ascent at 2am and would hopefully, by then have plugged a reasonable number of steps in the snow.

After getting up next morning, we found the snow in a nice and frozen condition and started following the tracks of the other two parties. At some point, we roped up (which gave me a chance to figure out what a kiwi-coil is), later took some photos of a beautiful sunrise, and soon reached the saddle between Footstool and Cadogan Peak. The remaining 400m got increasingly steep, and we even had to pitch the last 20m (by shamelessly attaching to the top-rope of another party) to get on top of an icy bulge, which turned out to be Footstool peak. 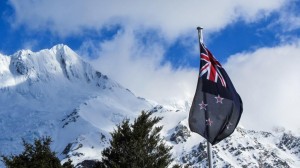 After the obligatory summit photo and some well-deserved chocolate, we climbed down again and back-tracked our steps. Getting down turned out to be more tricky than getting up, as the snow had turned increasingly soft by then and each step could either be OK or could get you in a 1m deep hole. Back at Sefton biv, we first enjoyed a brew and then continued the descent towards our car. The rest of the trip was spent with sleeping, driving, and hours of waiting at the airport – doing the trip in two days would’ve definitely been possible, but unfortunately, you can’t book the good weather in advance.