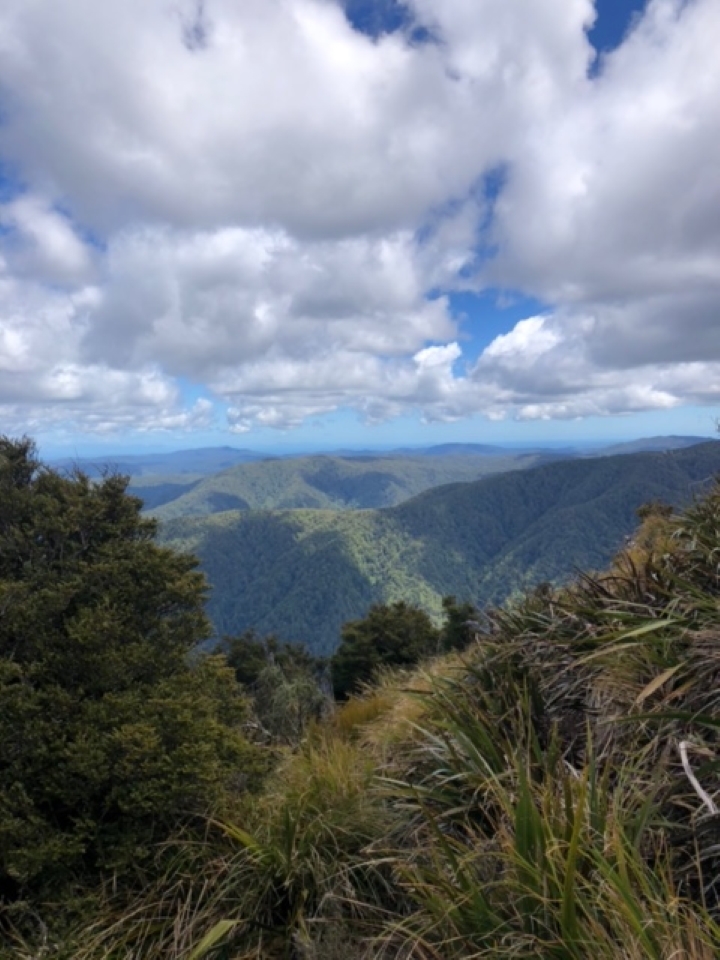 Alpha Hut was our plan B, as we could not make the Southern Crossing happen due to the closing of the Otaki Forks road.

We met on Saturday bright and early at 6:30am at the train station, before driving to Kaitoke carpark (Kiwi Road end). We left around 7:45am and started walking in the beautiful Kiwi bush. This was my first tramp with the club since the beginning of the year so I was so happy to be back in nature!

We took the Dobson Track, continued to Marchant Ridge and started our climb. The track climbs steadily, as per a typical Tararua track. We set a slow but steady rhythm and took several stops to rest. Most of our group were new trampers, so we were probably slower than your typical club trip. The higher we got, the windier it was, so we needed to find a more covered spot for lunch. We stopped right before getting to the bushline.

Energized after lunch, we got to the tops only to continue climbing because Saturday was just up, up and up (with some downs, followed right after by another up). The views were amazing, and we could enjoy the sunny weather, while not being too hot thanks to the wind. It is always (almost always?) windy on the tops.

We kept advancing slowly but steadily. By then, we had covered half the track to Alpha Hut. We were coming to terms with the idea of arriving quite late to the hut. We made several stops, making sure the group was together at junctions. The terrain was very moody at times, and I have proof:

We passed the Omega junction at around 4pm and decided we would continue to Alpha Hut (as going to Tutuwai Hut instead would probably take as long, if not longer). As expected, we arrived at Alpha Hut at around 6pm, after 10 hours of walking. We got to cooking right away and I can say that the club’s satay noodles recipe did not disappoint. If you try the recipe, just be conservative with the amount of water used to make the coconut cream (or enjoy your soupy noodles, as we did!). Alpha hut has 20 beds and it was quite full so we enjoyed chats with other trampers, and a very friendly atmosphere.

After a good night’s sleep (almost for everyone – Sara and I will not forget to bring warmer pyjamas in the future, even if it is a summer trip!), we started walking at around 8am on Sunday. We returned following the same track we took in as this is the shortest way out, and we wanted to make it on time to Wellington. Also, walking on the ridge never gets old, so we were all happy to repeat. We had less climbing and the weather was a bit cooler, so we kept a slightly faster rhythm and had less stops, and made it out in around 9 hours. Then Caryl drove us safely home in the brand new club van. What a treat!