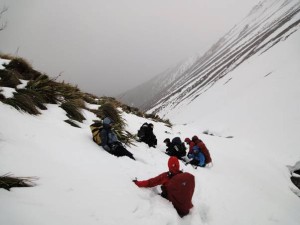 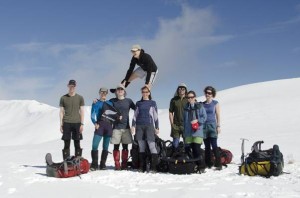 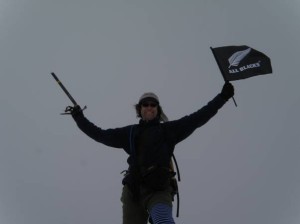 After 4 long years the RWC is upon us at last. Our pre match build up has been arduous both physically and mentally. On top of the training we have had to endure relentless hounding from the local and international media, the IRB and the sandflies. However, I think all these trials have stood us in good stead for what lies ahead or as Nietzsche said “that which does not kill us makes us strong”.

You would not believe the selection headaches, although they are of the kind any other team would envy.  Ian Whitelock showed good form on Snowcraft, so we selected him for the Angelus expedition even though we knew he is lacking in game time having missed the Tahurangi expedition due to illness and he is carrying a leg injury after the Southern Crossing trip.

Sonny Spencer returns to the team after fulfilling some off shore sponsorship commitments, or was it a sabbatical? While boxing bouts can conceivably count as cross training, I was not entirely convinced that trying to save albatrosses and other sea birds, by attending meetings in Equador, was quite the quality of training he would have gotten if he had been with us in the blizzard on Tahurangi. Still, as I said to Smith, we have to deal with the cards we are dealt and saving sea birds is great PR.  (Whitelock left the cards in the van but I digress…).

On the plus side Kate Kahui and Smith (Megan) are in exceptional form with Katie Dagg and Paula Weepu also looking fresh compared with some of the more experienced players we decided to leave behind.

With the team finally assembled our first video training session was conducted over a few of the sponsor’s beverages at the Alpine Lodge in St Arnaud. The team watched the second half of the All Black’s game against the Brave Blossoms. Unfortunately Sonny Bill kept his shirt on and Kahui got his two tries in the first half while we were enjoying a curry in Picton. I understand we won though, a point I emphasised in my training lecture.  Kirwan hasn’t done a bad job with those Blossoms, must call him and encourage him to apply for my position.

Saturday and we managed an early start as planned. This was facilitated by most of the team sleeping in the Kerr Bay shelter, recently renovated by DoC to make it less attractive for illegal campers. Thin benches and tables are insufficient deterrent although definitely a shift in the right direction. The camping crew picked up Sonny, Dagg and Weepu from their luxury accommodation and we headed for the Mt Robert car park.

The conditions were outstanding for a day of ridge walking. Clear, sunny with just a light southerly breeze. The team was able to make rapid progress along Robert ridge enjoying the awesome views across to the St Arnaud range in the east and the Arthur range in the west. We paused for a team photo on Mt Robert where Dagg showed us her lineout skills. I was surprised at how good her skills were given we had selected her to play on the wing.  I made a note to mention this to Hansen. We named an otherwise unnamed peak, Kahui Peak.  Hopefully Adidas and Heineken will understand.

In the afternoon we continued to follow the ridge until we eventually dropped into the basin that houses Angelus hut. It was about 4pm so we had plenty of time for some stretches and a lengthy team talk. Although Dagg, Kahui and Smith spent a lot of time in the showers, (I made a note to have a word to Rexona about sponsorship commitments interfering with training), overall the team seemed focused and well prepared for the coming climb. Smith (David) and I were quietly pleased with the way things were shaping up, not that we let it show.

The weather was rubbish over-night but had cleared by morning. The snow was a little soft but not too much trouble as we had a rotation policy in place with a long line of step plugging talent to call on. Sonny, Smith (Megan) and Kahui did the bulk of the work with Whitelock often breaking ranks to indulge in his passion for photography.

Occasionally it was necessary for Smith (David) to send messages to the backs to make sure the game plan anticipated opposition tactics. With the big match against the French coming up, and our abysmal start against the Wallabies in the last Tri Nations match still fresh in our minds we were keen to practice adapting tactics on the fly. Smith (David) led the way through a network of tarns at the base of the summit and gave directions on the preferred line at various points higher on the north ridge. Generally, however the experienced back line proved adept at getting the measure of the opposition and exploiting their weak points.

Scrambling up the snow coated scree slopes was slippery work and I think Dagg and Weepu grew from the experience, although Weepu is never going to be as tall as Whitelock which is why she is a halfback rather than a lock. I say that only because I know some of you think that Smith and I tend to take the rotation policy too far.

The team reached the summit just before 11am and it was a very proud moment for Smith and I although we maintained our stern demeanour and dour facial expressions throughout. Whitelock took pictures of course and the summit being rather petite, the players had to take it in turns to pose up there. They managed to do this in an orderly manner. I gave a short lecture congratulating the chaps and mentioning that they were a credit to their coaches, their club, their country, the sponsors and the game.

We retreated to a flat piece of snow for a leisurely lunch. While it was claggy it was incredibly hot and some of the team were in danger of suffering from heat exhaustion. Even so, Sonny showed great professionalism and self discipline and kept his shirt on. Large amounts of sunscreen needed to be applied but the players refrained from getting out the Heineken and the Rexona which I think shows a level of maturity on their part. Even in the professional era there are situations where it is neither the time nor the place for indulgence in tacky commercial posturing and the players recognised this.

Smith (Megan) was suffering somewhat from the glare. Her goggles were not filtering sufficient light. Smith (David) was able to partially alleviate this problem by lending her his glacier glasses. We did have a few other injuries which we treated without having to substitute players. Weepu and Sonny in particular seemed to have a talent for spotting gaps and sinking into them, even Kahui displayed this tendency from time to time. Smith (David) thought maybe he should txt Marty Johnson and offer to show his backline how it is done.

Having reached the summit we took our time wandering back to Angelus hut, once down a bit the sun came out and we were treated to another gorgeous day with absolutely no wind. Kahui, in response to a dare, ran across frozen Lake Angelus. She really is an exuberant back that one. Later on Dagg and Kahui led the team in an extensive stretching and warm down programme. Smith remarked to me that perhaps we could pass this on as a suggestion for post match letting off steam to Marty. Might be more prudent than swimming across Lake Whakatipu, bungy jumping , hanging out with dwarfs and running amok with blondes, he opined. I thought about it then dismissed the idea, reminding Smith about people who live in glass houses.

Even all the stretching was not enough to consume Dagg’s excess energy so excited was she to be part of the team.  She spent a good part of the evening manically scrubbing the billies and the hut itself. As if that was not enough she produced an enormous batch of homemade gluten free kiwi biscuits for the team’s dessert! Dagg definitely has the makings of a future captain.

The retreat from Angelus

Sunday evening the weather changed. The wind picked up and it started snowing. Smith and I decided we would retreat via Speargrass and developed a strategy to make this happen. Whitelock was told to put his camera away and was sent off to do the first bout of step plugging to get the team back onto Robert ridge. Sonny then took over, (he really is a wonderful impact player), followed by Kahui then Smith (Megan).

Once we started dropping into the Speargrass valley the snow got progressively wetter and softer and the capacity for Kahui and Weepu to find gaps to disappear into seemed to increase significantly. At one stage the entire team were up to their waists in gaps.

Thankfully we were soon able to leave the snow behind and walk in the rain amongst the tussock and, a bit further down, the bush. I even took the lead for a short period until I managed to get offside at which stage Smith (Megan) quickly reassumed the lead.

Walking in the tussock was not without its challenges. At one point Weepu and myself stumbled across Sonny lying prone against a large rock. When we asked what he was doing he replied he was waiting for the pain to subside then he intended to return to a vertical position. We waited with him in case assistance was required. Thankfully none was. Kahui had the PLB and first aid kit and she was at the other end of the field.

Sonny had been down Speargrass before but that was in his league days and his memory of it was as hazy as the clag around us so he was as surprised as the rest of us when we spotted the hut at about 10.30am. We crowded in for an early lunch. Due to the dampness of conditions and the coolness of the air it was considered prudent not to linger.  I sent Smith (David) off with the backs and Whitleock as a sort of advance party while I remained behind with Weepu and Sonny. However, I soon saw that I would get too cold at the back and left those two to come along at their own pace and set off after the rest of the team.

I eventually caught up to Dagg who was contemplating the beauty of the NZ rainforest. It was touching to see such sensitivity in an otherwise hardened professional athlete, definitely a future captain in there somewhere. I paused to wait for Weepu and Sonny until again the chill in the air sent me off towards the van.

Back at the car park we gathered together our kit and plotted our after match function. We partook of coffee and other refreshments in Blenheim where we learned of the Irish victory over the Aussies. I thought about texting Dingo but decided against it, we may yet meet them in the semis, best let the team do the talking on the field. As Smith pointed out, England once lost a pool match and still made it to the final. Inspired by the Irish we visited the Irish pub in Picton.  I thought about rebuking the team for drinking Guinness, but refrained. For all I know Guinness could be the rival sponsor holding up Sonny’s contract negotiations. Best stay out of that one I told Smith (David) as we boarded the Bluebridge for the journey back to headquarters.