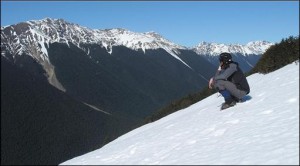 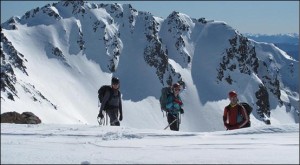 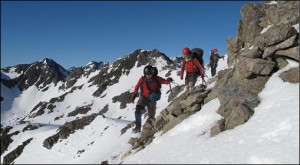 The tail of the big snowstorm of 2011 had passed and the weather appeared to be coming good just at the right time. The sheer volume of snow and the last of the bad weather along the East Coast had seen a late change of plan; our Tappy trip had became a Nelson Lakes one just a day or two earlier.

Meanwhile I had a spanner thrown in the works at my end. When I arrived to catch my plane to Wellington the girl at the counter said that the flight had been cancelled for maintenance.

Standing at the counter just 40 minutes before take off, with no prior notification, I was somewhat disgruntled; “It’s alright though, you are lucky, we can get you on a flight arriving in Wellington at around 2:10 this afternoon”.

I attempted to explain that this would make catching the 2:30 ferry somewhat difficult & that perhaps there were other more timely options, but no that was it, the earliest they could get me to Wellington would see me collecting my bag at the airport as the ferry sailed; I didn’t feel all that lucky right then.

After a few more dramas I eventually managed to get a connecting flight to Blenheim and after conferring with Steve re pick up in Blenheim, it was all back on.

Some hours later I was looking out the window at Tappy and the surrounding peaks absolutely plastered in snow, there were clouds off out to sea but from the Kaikora’s  west everything  was bathed in sunshine.

The Taxi driver taking me in from the airport suggested I try the Blenheim Working Mens club, which did a really good roast dinner for around $15, so nursing a beer or 2 and enjoying a roast pork meal, I awaited the arrival of the rest of the team.

A few text messages later they announced they had found a Japanese / Korean Restaurant and had ordered dinner. Thinking Blenheim wasn’t that big I headed out the door and turned left into town being sure I would find them. A few minutes later Steve rang and said: “I am standing outside Farmers”. “So am I”, I said. Turns out we were just around the corner from each other, on different sides of the store.

The others had some interesting looking meals and then we were off to St Arnaud where we had booked into the Backpackers to escape the frost.  The thermometer on the van showed -9 degrees at one point so we were glad to be tucked up inside rather than in the open shelter as per normal.

Arriving the next morning at the Buller River Bridge we found it chained off and the road was closed, so the packs came out a little earlier than planned and we had an extra 45 minutes or so of uphill to the top car park, but it was such a magnificent day it somehow just didn’t matter. There was no wind and not a cloud in the sky. Topping out at the bush edge we put crampons on straight away as the snow was firm and slightly icy in places from the freeze overnight.

Here we began 3 glorious days in the snow.  From the time we left the bush edge early Saturday, until we reached it after lunch on Monday we were in the sun and snow almost continuously and most of the time was spent in shorts and my short sleeved polypro; not bad for tops travel mid August!

I had always wanted to get along here in good snow conditions and was not disappointed. There are enough little interesting sidles and outcrops to test out your crampons and ice axe skills.   Sidling below Julius Summit was interesting as facing west, and being prior to the afternoon sun hitting the slopes, everything was still firm-icy requiring care in places.

Finally we popped out on the ridge over looking Angelus from where we dropped straight down the slopes below and walked across the frozen tarn and up to the hut, where smoke was already rising from the chimney promising a cosy evening ahead.

We had a slow trip in, negotiating obstacles and taking care on the steeper bits had seen us take over 7 hours from the top car park, but it was still only about 4:30 when we first arrived so we had plenty of time still left in the day.

This was my first visit to the new hut and while opinions were divided, I suppose the living / cooking areas are a little spartan, I thought the use of window space to maximise the views was fantastic. Lounging beside the windows watching the fading light on the peaks above the lake is an absolute joy.

There were only 2 other people in residence so we spread out in the opposite bunkroom, but the weather window was obviously way too good.  Just as dusk was approaching we saw a guy skiing down the steep slope we had come down earlier, with a headlamp going. As he skied in it was a pretty cool entrance and over the next half hour or so another dozen or more people arrived as well.

Meanwhile Steve took the snow shovel and dug a hole in Hinapouri Tarn; well at least enough of one to allow seepage to gather and provide the hut with water for the weekend.

Chorizo sausage, pasta & veggies for dinner: yum. Then WeiMin whipped up a fabulous custard to go with the Ginger cake he bought for dessert.

Most of the others in the hut were only in for the weekend, so a number of them were up at 4:30am to climb Angelus. This woke me up so I took a tour around the hut admiring the stars, with a half moon and still no clouds or breeze it was fantastic out, just a little chilly.

Returning to the pit I drifted off again and at the somewhat more civilised time of 7:00am it was up again for a brew and breakfast.

We got away about 9:00am in the end and headed off to climb Angelus. On the advice of the returning party we climbed up on to the northern spur and followed that up to avoid deeper softer snow off Sunset Saddle, this proved to give good travel, though the snow was a bit thin in places here with a few rocky bits along the way. Soon enough we were on top and enjoying the views, especially over to Tappy – and through to the Kahurangi’s looked fantastic as well.

Here Steve rang Jenny to let her know we were standing on top in perfect conditions.  She said that Wellington had a grey overcast day, very different to our experience as we couldn’t see a cloud in the sky anywhere.

On top there was just a very slight southerly airflow, so we dropped down towards Sunset saddle where we basked in the sun for a while and had lunch.

We then sidled north again under bluffs coming off Pt 1926 & 1880 and then climbed up to intercept the track over to Cedric. We followed this across to the high point above Cedric where we enjoyed views of Lake Rotoroa and up the Sabine and D’Urville valleys. Returning, we followed the line of the trail back until close to Lake Angelus where we pushed on to the ridge above the lake and then dropped straight down to the lake, walking back across it to gain the hut.

While waiting on the ridge I heard a familiar sliding sound and shortly afterwards a skier raced across below me having climbed to Bristol Pass. He was having a great run back down to the hut in really nice snow conditions.

Back at the hut by 4:00pm we sat around out on the deck enjoying the last of the days sun and then inside to tackle a few hands of Five Hundred before dinner and the discussion over which route to take back out. There were voices in favour of Speargrass, Cascade and Robert Ridge, but I think eventually the chance to spend another day in the snow and sun was too hard to resist so we decided to return back the same way, just dropping to Bushline Hut for a change over the last part of the journey.

Tuna curry for dinner and I retired early while the others continued with cards.

The next day we made much better time along the ridge, we got under way about 8:00am and were at Bushline Hut by 11:30am where we stopped for lunch and more photos, eventually packing up reluctantly and heading down the hillside and back to the van.

This was one of those trips that will last long in the memory: great snow conditions and brilliant weather, in a wonderful part of the country.

Thanks to Steve for leading and feeding us.  We enjoyed a fantastic replacement for Tappy, though I think a few of us may well be back for another crack at it again next year.

If there was anyone who didn’t see this, check out the link re snow in Cuba St, magic!