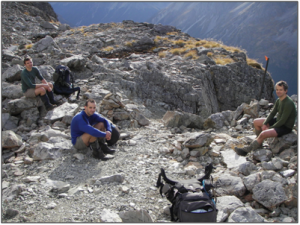 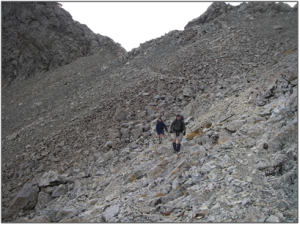 Three keen punters (we picked Richard up from the Junction Hotel in Spring Creek) assembled at Wellington train station on Tuesday evening, before embarking on the 5 minute drive to the Interislander ferry terminal. John and his group were also aboard for the van and ferry ride. The ferry ride to Picton was fairly uneventful unless you happened to be commandeered to join John in a game of 500. Once berthed safely in Picton we began the drive to St Arnaud, stopping briefly so Richard (who had been waiting for us at the Junction Hotel) could climb aboard and commence his share of the driving duties. We arrived safely at the very nice St Arnaud backpackers around 11.00pm.

Wednesday morning (ANZAC Day) dawned fine and clear for the water taxi ride up Lake Rotoroa to Sabine Hut. The plan for the day would have us travel up the well maintained track up the Sabine River to Blue Lake Hut. The weather was fine and calm as we wandered up the track to Blue Lake. The pleasantness was tempered somewhat by the fact that any form of break would result in the party being crashed by the resident sand-flies! The trip to Blue Lake hut took around 7 hours, which included breaks despite the sand-fly epidemic. I had unfortunately contracted a rather unpleasant cough a few days before departing for the trip, which meant that the short breaks were quite welcome as I coughed and spluttered my way along. Thanks to the others for putting up with my numerous coughing and gasping fits they had to endure! When we arrived at Blue Lake Hut we relaxed before enjoying a dinner of Mediterranean fettuccini. Some members of the party chose to make the short trip to Blue Lake for a nosey around. I chose to stay in the hut and cough! The visit to the lake could wait until the next morning.

Thursday was also a cracker in the weather department. However, the forecast for Friday was looking rather less inviting. The original plan was to have us camping at Lake Thompson on Thursday night, but due to the dire forecast for Friday this idea was abandoned, and we were left with the option of trying to get over Waiau and Thompson pass and down to Upper D’urville Biv in 1 day, or just heading west from Blue Lake over Moss Pass and down to George Lyon (formally Ella) hut. As this trip was designated a medium, the Moss Pass option was selected. The trip from Blue Lake to Moss Pass was quite a pleasant ascent, only got loose and scrabbly for the final 50 – 100 meters. We had a short break at the top to admire the views before commencing the decent into the D’urville Valley. The trip down from Moss Pass is not too bad, but does have a few steep sections. George Lyon hut was reached mid-afternoon.

Thursday night the weather packed in and it bucketed down, vindicating the decision to abandon the camping aspirations. Friday was wet all day so a rest day was called. The majority of us choose to hang around the hut all day, except Adam who was suffering from cabin fever and went for an afternoon trot back up valley.

Saturday we decided to head up valley for a jaunt to Upper D’urville Biv and then back down and spend the night at Morgan Hut. The trip up to the biv took about 3 hours, although only around 2.5 on the way back to George Lyon hut, where we stopped for an early lunch, before proceeding down to Morgan Hut. The track was in good condition and it Morgan Hut was invaded by the WTMC army in the early afternoon.

Sunday was home day. We left Morgan Hut and continued down valley to D’urville hut, our rendezvous point for the water taxi pick up. Again, the tramp was uneventful, although being constantly forced to wage genocide on the sand-flies was becoming rather tiresome. We decided to deviate from the track and follow the river to avoid unnecessarily climbing over a bluff. We also took the opportunity to practice river crossing techniques in the D’urville . We reached D’urville hut in with ample time to spare, and enjoyed feasting on our remaining food. The water taxi arrived on time and we headed back to the van via Sabine Hut where we collected John and his punters.

We headed for Picton, via St Arnaud for a bit to eat, and arrived on time for the ferry sailing. Unfortunately the ferry was delayed, so we were a bit later than expected arriving back in Wellington, and the end of a very nice trip down to Nelson Lakes National Park.