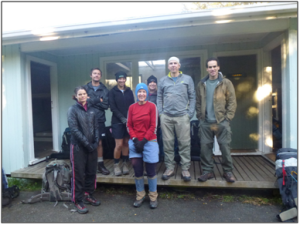 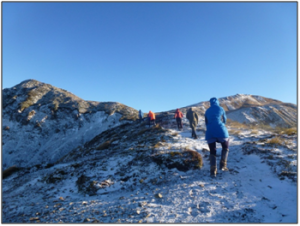 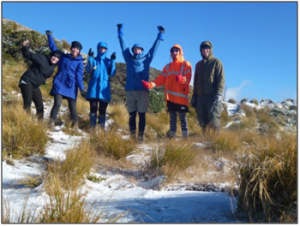 It was with some trepidation that I joined a group of fellow trampers at the Wellington railway station on Friday evening. I had signed up to tramp into the Ruahines over the weekend. This was my first major tramp into one of New Zealand’s mountain ranges, near winter. I know it’s been said before but “because they’re there” was my answer to the obvious question. For the life of me I couldn’t think of a better reason.

The shuttle arrived and we were off, stopping at Carterton for dinner and then onward to the foot of the ranges. No turning back now. First up, a 15 minute hike in the gloom to the Triplex Hut, our starting point for the following morning. Light rain falling, which hopefully would not be a sign of things to come.

It was fine Saturday morning when we began the first major leg toward the Sunrise Hut. Aptly named as we were to discover. Unfortunately also aptly named was the swamp track which we spent unnecessary time circling as we had missed the turn off to Sunrise Hut. Not an auspicious start, however our spirits rose as we finally found the right track and began the ascent.

It is a demanding hike for a beginner and I was glad I had done plenty of walking and running in preparation. Tramping in a group with plenty of laughs and encouragement certainly makes tramping easier and after a few hours we had reached our first goal.
We ate lunch at the Sunrise Hut and then began stage 2. A tramp across the ridge and down to the Top Maropea Hut, where we were to stay the night. The hut is much smaller than the Sunrise Hut, which would have meant some of us sleeping in tents outside. I could see this turning into a sprint finish.

At this stage mother nature decided to play her unwelcome part. As we traversed the ridge we were assailed by rain, wind and sleet. So strong were the gale force winds that we were nearly knocked off our feet. We felt it was too dangerous to continue so we turned our stinging faces back toward Sunrise Hut to wait out the storm. Unfortunately it never abated so we resigned ourselves to a night at the hut.

Out came the cards and the hours soon passed, not without a few friendly arguments along the way as to which hand beat which hand at poker. A recurring theme obviously, as it was only after some hours we discovered, written on the table by some previous occupants, the very answers. And on the subject of previous occupants, we found interesting the hut log book with the thoughts, and often humorous comments of earlier trampers. One particular entry by a young man named Henry was a plaintive message for girls to call him at his given number. As a dating agency you would have to say this was one of the strangest and least obvious services around, however Henry, if you’re out there somewhere, there are a few numbers alongside yours so maybe it’s time to get back up there and log in.

Also in the ‘believe it or not’ department was the late arrival, in the falling snow, of a teenager and his grandparents. His goal as part of a school bush project was to sleep outside covered in a tarpaulin. We stood amazed at the hut window, watching this valiant young man burrowing into the snow to clear a hole for him to crawl into for the night wrapped in the tarp. Such is the stuff of intrepid explorers. Eventually the foul weather drove the young man into the warmth of the hut, somewhat fortunately as we had visions of returning his frozen body back to his school as a show and tell exhibit. I don’t know what other projects his school has underway but it would no doubt account for their diminishing school roll.

Woke up early Sunday morning to experience the sunrise for which this hut is named. A wonderful sight. I read recently where a late Wellington personality would yell down the phone to anybody who responded to his call with the word ‘awesome.’ “A telephone call is not awesome,” he would shout, “A sunrise on a perfect day is awesome!” I get it.

We set off early to again attempt the ridge. This time the weather was kind and we were

successful in reaching heights. Superb vistas and lots of fun in the snow. Our guide, Gareth, told us to “bag a summit,” any summit and it would become your summit. I know it wasn’t exactly Everest but it felt that way to me.

The tramp back down the mountain was a mission in itself. We decided to follow a track along the river, however along the river became increasingly across the river as we were forced to ford the river again and again. Tentative steps across boulders soon turned into boots and all plunges into the freezing waters as we gave up all hope of keeping our footwear dry.

Finally we emerged from the bush, loaded the van for the long drive home. It may have been my first major tramp but it won’t be my last. My new goal is to complete the required number of tramps to enable me to join the tramping club. Beautiful New Zealand is out there – you just need to go out and find it.