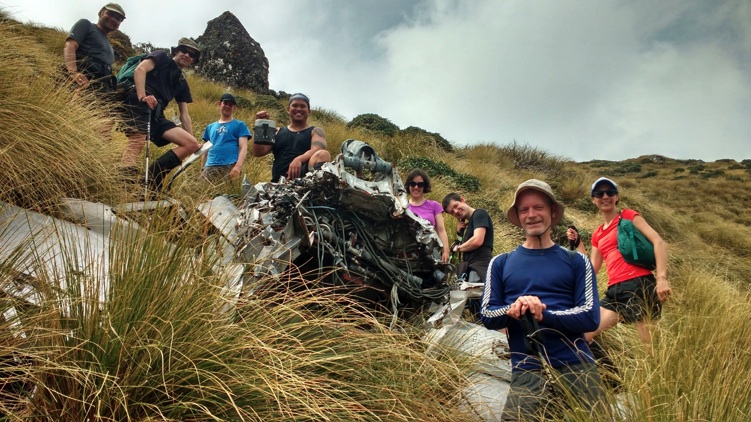 When I saw that a tramp to the plane wreck at Shingle Slip Knob was planned I was keen and quickly signed up. On my first climb of Mt Holdsworth when I was 12 years old we spotted the wreck in the far distance. Something about the wreck captured my imagination and it had been in my mind to visit it ever since.

We headed up to Holdsworth road-end on the Friday evening and walked to Atiwhakatu hut in warm conditions. There were only two other people staying in the hut so we could really spread out and we were also able to grab a couple of mattresses each for extra comfort (more about mattresses later).

On Saturday morning we had the steep slog up to Jumbo hut and peak. From Jumbo there were expansive views of the Tararuas and our route to Angle Knob and towards Shingle Slip Knob. It was hot work up on the tops and we all made sure we filled up our water bottles at Jumbo hut.

There was good travel along the tops to Angle Knob where we had lunch. It was possible to see the wreck but it was still about 1.5km away.

Just to the east of Angle Knob there is a very steep pinnacle. It took us the best part of an hour to negotiate this point (point 1412). Every option looked ok until we got to it and then it became much steeper than it had looked. We traversed some steep slopes that luckily had strong grass to hold onto. We travelled on the left (South) side of the pinnacle but the Northern side is much better and safer.

After negotiating the pinnacle we dropped our packs and headed off to the plane wreck. There is no trail or track along the ridge to Shingle Slip Knob and with a distance of over 1 km it took a surprising amount of time.

At about 3pm we clambered down from the ridge to the plane wreck. Part of the fuselage is still there, along with the wings, two engines and a propeller. The wreck is located on a steep slope and we had to be careful while exploring the wreck that we did not slip and gash ourselves on the sharp metal. We could see Mt Holdsworth many kilometres away.

The plane was a New Zealand Airforce De Havilland Devon and it crashed in 1955. Apparently on old Tararua maps it was marked as an emergency shelter. It wouldn’t have been very comfortable to stay in as the plane crashed onto a steep hillside and the fuselage is not that big.

Near the plane wreck are two memorial crosses for the crew of the plane. It’s a lonely and exposed spot and the crosses are showing the effects of the elements.

After exploring the wreck and memorials we got back to our packs and back to the pinnacle again. This time we traversed the pinnacle on the northern side. It was much less steep (but still with one steep climb up a shingle chute) and there is a trail and a few cairns. Unfortunately we didn’t spot this route on the way as it was much faster than the southern side.

It was around 4pm by this time and we had been on the go for 8 hours. The original plan was to go to Powell hut for the night but this would have taken us a few more hours. We were all pretty tired so we decided to go to Jumbo hut for the night. We arrived about 6pm after a long day over some steep and at times difficult terrain.

Jumbo hut is officially closed for repairs but the door is unlocked. The gas is turned off and the mattresses have been removed to discourage people from staying. It was an uncomfortable night on the platforms bunks even for those of us with sleeping mats. Some people had not brought sleeping mats so had to try and make do by sleeping on clothes and scraps of cardboard left in the hut. So from two mattresses each the night before we went to thin sleeping mats or bits of cardboard.

The next morning we were all a bit stiff from the day before and also from sleeping on the hard surface. We headed back up to Jumbo peak and across the tops to Mt Holdsworth and Powell hut. Due to cloud we could not see back to the plane wreck but it was still hot.

We had lunch at Powell hut and then made our way to Holdsworth road-end for the van trip back to Wellington.

It was good to finally reach the plane wreck after all these years on what turned out to be a challenging tramp. Thanks to Kerry for organising and leading so well.