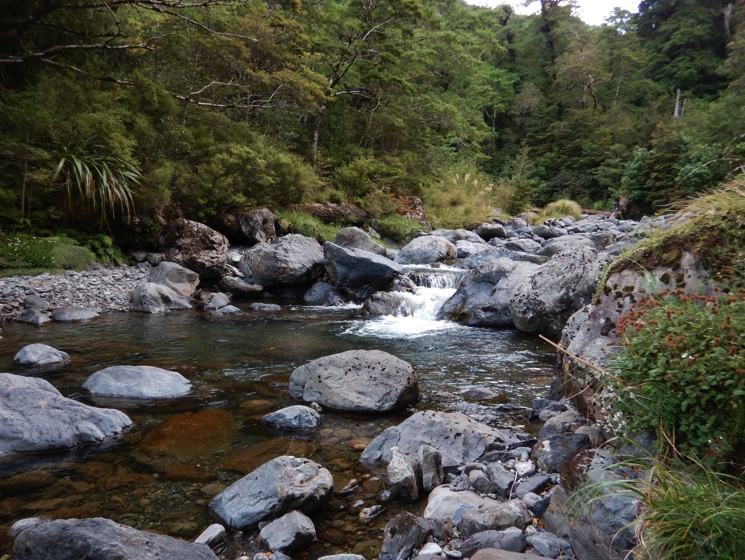 I signed up for this tramp in order to brush-up on my navigational skills and also to travel over Pinnacle Ridge between the Atiwhakatu valley and Barton track. However, soon after signing-up I found myself organising and leading this trip with the expectation that I would be instructing on navigation!

On the Friday evening we travelled in the van with the easy group to Waiohine gorge road-end and campsite. We had a lovely night there at the campsite and enjoyed great weather and a BBQ courtesy of Bram and Marieke. The Waiohine gorge road is open again all the way to the camping area after some slip damage had closed the road for a while.

The next day we drove to the Holdsworth road-end and met-up with the fourth person in our group. The initial part of our route took us along the North side of the Atiwhakatu river until we were opposite Donnelly Flat. A slip was our waypoint and our place to start to go up onto Pinnacle Ridge.

We stopped a number of times to consult map, compass and GPS and also to take note of the terrain as we ascended onto Pinnacle Ridge. The route is marked with permalat markers but it was still good to practice following a bearing and the terrain. The weather was very hot even in the shade and the bush was bone-dry.

After numerous map and compass stops we made it to the top of Pinnacle (point 877) where we were rewarded with splendid views of the Tararuas. We could see Powell hut, Mt Holdsworth, Jumbo hut and much more of the range. From Pinnacle we could see the next part of our route so we could identify spot heights on the map and then compared these to the high points we could see along Pinnacle Ridge.

It was very hot and sunny and after lunch we descended into the relative cool of the bush along Pinnacle Ridge. The route along the ridge is well marked and visible. However, towards the end of the ridge, as we neared the Barton track, the route became slightly harder to follow. This was good route finding practice and we reached Barton track with no problems.

The original plan had been to go to Mitre Flats hut for the night and then return to Holdsworth via the Barton and Atiwhakatu tracks on the Sunday. But with such good weather we decided to go to the Atiwhakatu river and stay the night under the tent fly. This plan would also allow us to go back over Pinnacle Ridge and follow a slightly different route back to Donnelly Flat on Sunday – therefore getting more navigation practice.

We found a lovely, flat and softish campsite near the Atiwhakatu river. We were close to the river but far enough away to avoid sandflies. There was a deep pool in the river and we had an enjoyable swim and sunbathe. Dinner was couscous and chorizio followed by Christmas mince pies and custard.

On Sunday we travelled back along Pinnacle Ridge. Instead of returning the way we had come we took another option and headed straight towards Donnelly Flat rather than going over Pinnacle point again. We had good travel and made quick progress along the ridge. There was quite a steep descent at the last part of the route just upstream of Donnelly Flat but there were plenty of trees to hang-on to and also a rope at the steepest part.

We were soon back at Holdsworth road-end where we had another swim (two swims in a weekend in the Tararuas is quite rare). We picked up the easy group from Waiohine road-end and then had a safe trip back to Wellington. We had a great weekend of fine weather, interesting terrain and route, navigation practice and excellent food. Thanks to Emily, Fons and Momo for being such good company.