As a city bloke through and through, who loves his cocktail bars and having a wealth of restaurants to dine at, I can’t quite put my finger on why I have a yearning to get exposed to the elements on a wind-ravaged hillside. Maybe getting out in the elements is my way of restoring balance to my yin and yang, or just to give life a different type of edginess to that which the Sydney traffic provides. Either way, I knew that when work asked me if I wanted to work in Wellington for a few months, I’d get all the wind ravaging I could want!

Google gave me the WTMC website, and following a bit of reading and a couple of Facebook messages, my first Wednesday evening in Wellington awaited me. Yes, I felt a bit of a fish out of water when I arrived (new guy in a new city), but I felt welcomed and I sat in the corner and tried to soak up as much as I could. Even though I’d done my research on the various categories of tramp, the choice was pretty daunting and I’ll be honest, I had no idea where any of the places were. What’s the worst that could happen?! I figured that as long as it was E/M, that’s all I was mindful of and having a look at the list, there was one on a weekend when I was free, so down my name went. “Mmm” I thought to myself “There’s quite a few people signing up for that, it must be good…if only I could remember what it was called. Still, at least I’ll get a reminder email”. Quite the surprise to see that I’d signed up to climb a volcano…Note to self: pay more attention in class.

Dutifully kitted out and hopefully having avoided being too “all the gear – no idea”, I made my way to the train station to meet my fellow trampers. What a great crowd! Great to see a few colleagues along as well, including our leader for the weekend, and so many new friends from different backgrounds, all up for a fun weekend of swapping stories, remaking friendships, and getting away from it all. The drive up was great way for a newbie to see a bit more of the country, and to get to know people a bit better. Sure, the weather forecast was pretty bad but then I turned my positive mental attitude up to 10 and convinced myself that it’s sure to blow over… *Cue nervous laughter from Toby*.

Needless to say, when we arrived the weather was a bit grim but the lodge more than compensated. I’m not totally sure what I was expecting, but I was certainly wasn’t expecting my home for the weekend to be so well presented! I thought tramping was all about getting dirt under your finger nails and living off dehydrated rations?! Suffice to say dear readers, it has since been made perfectly clear that we were being spoilt this weekend, and I’ll still get plenty of opportunity for lumpy rations!

After a great brekky and a decision to not try for the summit due to the weather, a few of us headed off to Tama Lakes. Apart from being confident that it would involve lakes (I can be uncannily perceptive sometimes), I was open minded to what the day would bring. Wow! The rain had meant that the streams and waterfalls were in full flow, and you couldn’t help but feel a real connection with the energy of mother nature, and marvel at the torrents cascading over the rock. I for one had never been behind a waterfall before, and it is a powerful experience not to be forgotten and rightly, quite humbling. Our break for lunch by the lower lake gave the opportunity to try some wild berries (very carefully inspected by our guide), and an opportunity to take in the surroundings. I don’t mind admitting to having a need to pinch myself as it properly dawned on me that I was eating a few wild berries as pudding for my scroggin, sat in the bottom of a partially flooded volcano crater, in New Zealand.

Now all we had to do was climb out of the crater. I have no doubt that putting your faith in tufts of grass as a handhold isn’t quite the done thing (certainly not for some party members, who exhibit worrying mountain goat tendencies at their ability to scale a slope!), but it worked for this newbie and soon enough I was on the top of the ridgeline and facing the full force of some fast moving cloud and rain. But you know what? I was loving it. Such a connection to the elements in some small way, all of us wrapped up and looking out for each other, deciding where to go and then making it happen. Yes, it was fun, bloody good fun, even when you’re being blown sideways. Maybe even because you’re being blown sideways.

After scrambling down to the water’s edge of the upper lake, we decided to make our way around to the other side. I still remember looking at the rocky outcrop and thinking to myself that it didn’t look so bad, and I was sure there was a trail to follow. Cue more grass tuft holding whilst perched upon slippery rock. Okay, okay, I may be making it sound more challenging than it really was, but there certainly wasn’t a trail. Oh, apart from that trail which our one team member found but by which time the remainder of us were in varying stages of tuft holding! Still, it all added to the adventure of the first day, which saw us tramping for about six hours and cover about 23km.

Following a welcome back to lodge which included freshly backed scones, spaghetti bolognaise and apple crumble, options for the Sunday were discussed. I was going to join the party of those foolhardy souls who were going to try to make their way as far as possible towards the summit, though in the knowledge that the weather would dictate how far we went and that realistically, we should consider ourselves lucky if we made it to the glacier.

The weather really decided to test our resolve the following morning. We awoke in the cloud, with some pretty strong wind and patches of icy rain. But hey, isn’t this why we wear waterproofs? We knew we weren’t going to cover as much ground as we had the day before, but our ascent was going to be a lot steeper as well as being over rock, and it was certainly a lot colder. Visibility was…variable, though as I didn’t know the way, all I focussed on was being able to see where I was putting my feet and avoiding causing bodily harm to others with a wayward walking pole. With the wind howling and tugging at our coats and packs, and rivulets and streams dancing around our boots, we steadily made our way higher and higher. Then – ice! We’d arrived at a tongue of the glacier at nearly 2300m, and I think we were all excited to see it and certainly for me, I was pleased that we’d persevered and made it that high, given the weather. I was also pleased that I still had gas left in the tank following the tramp the day before, because whilst the trip was judged to be E/M, one person’s easy medium could be a lot different to another. Now we just had to get down. 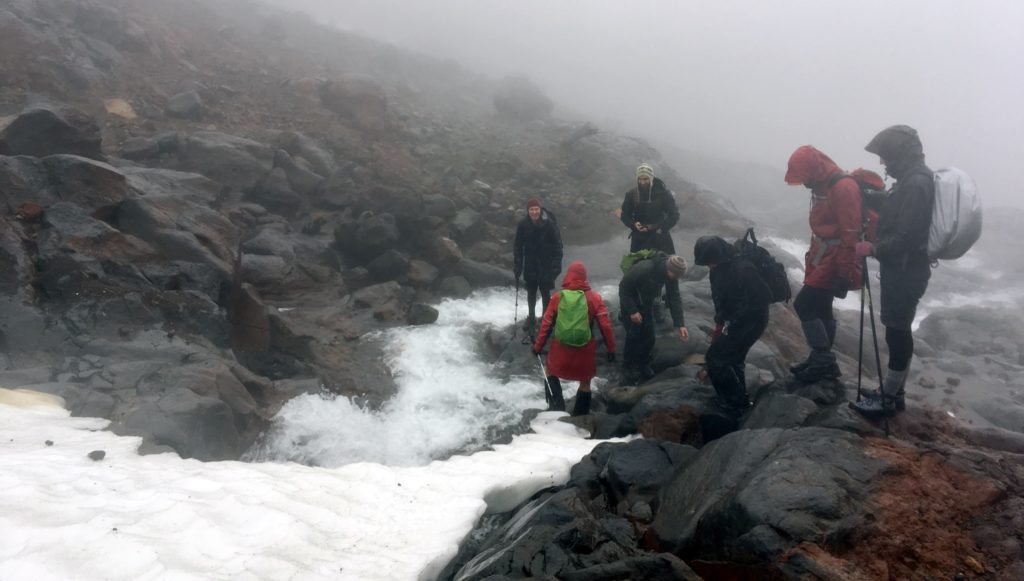 The wind and rain had primarily been to our backs upon the ascent, and didn’t show any sign of stopping simply because we wanted to descend. However on a lighter note, it enabled me to work out why I had the extra piece of drawstring in my hood, so that I could pretty much get my hood tight around my head and keep out the worst of the weather. Much like the day before though, I was having a great time! There’s something about testing yourself, even on a small tramp in weather which really wasn’t that grim (in the great scheme of things), which helps you to remember that life isn’t about the newest mobile ‘phone, or who’s on the cover of a glossy magazine.

And so, after we’d made our safe descent we packed up our kit and headed off for a well-earned late lunch and to meet up with the other party. Fun times, with fun people, and I’d like to especially thank Tony Gazley not only for his great leadership of the weekend, but for readily sharing his wealth of knowledge and experience, which was the icing on the cake of a great couple of days. 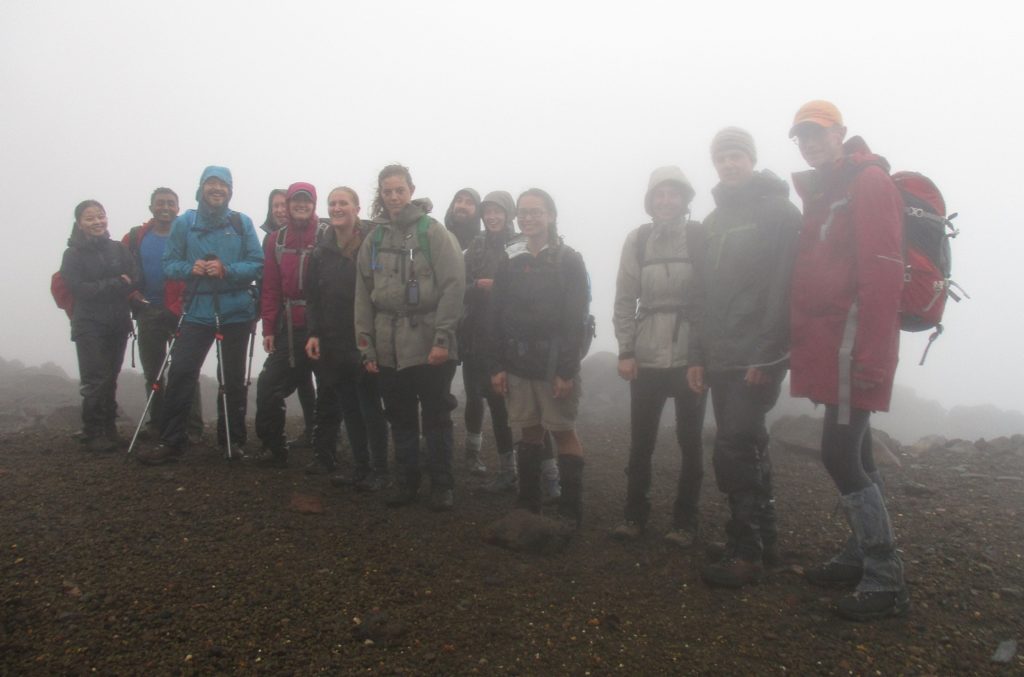