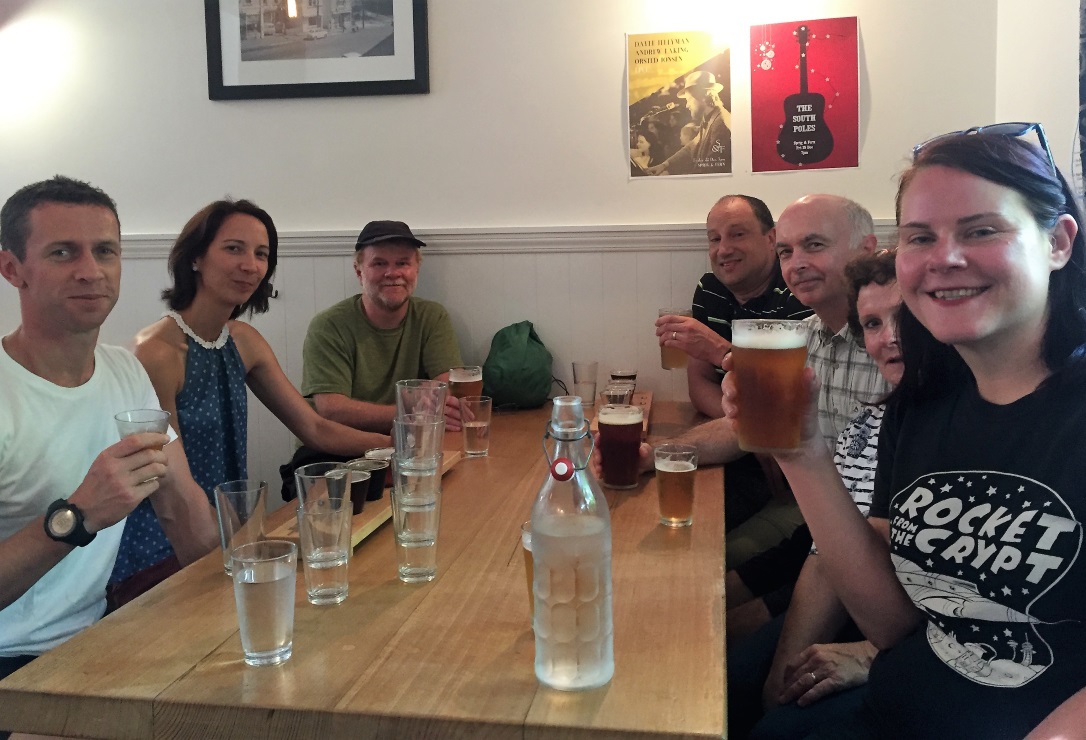 When I saw a beer tramp listed on the trip schedule, I thought it was a mistake. Since when were we allowed to drink alcohol on club trips? I discovered it was a pub crawl requiring punters to walk between bars around Wellington on a hot sticky Saturday. What a great idea – I could combine my love of the outdoors with drinking beer.

Like any other club trip, the trip leader, Mike Gilbert, was organised. He emailed participants a Google route map for the six venues, and the fitness levels required (e.g. Kelburn Village Pub was listed as a fit trip). It was good to see he was taking this beer tramp seriously. Mike even gave times of when to meet at each pub so people could join at whatever time they liked.

But when alcohol is involved, following regular club protocol (and times to meet) can sometimes fall by the wayside. Rules are relaxed and inhibitions disappear. Here are some examples:

I turned up to the wrong bar at the start of the day. Luckily, being in the city meant I had phone reception so I could call Mike to see where he was. In my defence, Garage Project Taproom and Garage Project Brewery are a few doors down from each other and they sound very similar.

Cotton tops just won’t cut it in the bush, just like they won’t if you walk up the steps on Norway St, Aro Valley to Kelburn Pub under a blazing hot sun. Lightweight, breathable clothing is best.

Comfort over fashion is the rule. Garth learnt he should apply this rule in the city after his nice looking boat shoes gave him blisters, causing him to pop home to bandage up his feet.

No one worth their salt will go on a trip without a decent first aid. But none of us could even cough up a band aid for Garth’s blisters. Fail.

Our club trips are very affordable and this trip was even better as it was free. But when you factor in buying craft beer at Wellington’s nicest pubs, your bank balance will take a severe hit.

TIP: Always be aware of your surroundings

Watch what’s in front of you or you may trip on a black power cable box and break it (you know who you are).

TIP: Don’t blindly follow the person in front of you

When crossing the road, look in both directions and definitely don’t follow right behind someone who runs across the road causing a car to blare its horn. Never assume the person in front of you knows what they’re doing (ha ha ha).

TIP: Plan ahead and give lots of information to your party

Mike booked us a table for dinner at 6:30pm, which was clever. He gave times people could meet at each bar but as the day went on, and his time watching ability dwindled, we were often late. Oops.

Joking aside, the beer tramp was a lot of fun! We started the day with just six people and eventually, around 15 beer trampers joined the party. It was a fantastic way to get to know our fellow club members without the worry of bad weather, tough terrain or cooking a meal at the end of a long day. If you’re keen to join the next one, it’s held every December so you’ve got plenty of time to “train” for it. Just make sure you wear comfortable shoes and bring lots of cash.