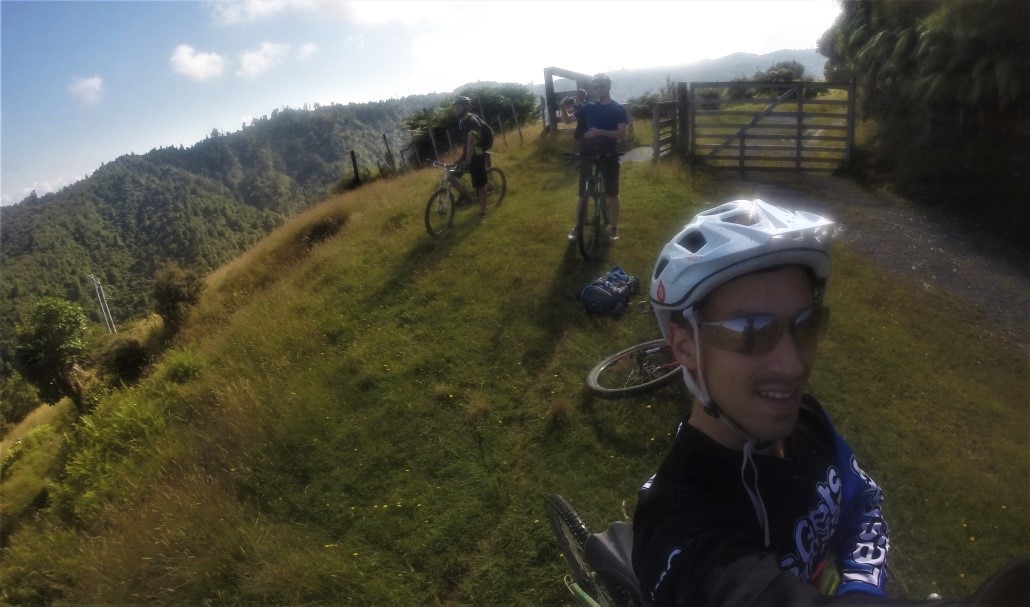 Journey prep at the station after work on Friday involved us fitting five bikes, eight people and eight packs into and onto the van. The jigsaw came together well with people generally strapped in seats and bikes generally strapped to the bike rack so we had a comfortable if slow journey up to the lodge through some of the worst Friday out-of-Wellington crawling I have seen in a while.
This weekend was a chance for WTMC to showcase some of the summer activities that people can enjoy from the lodge so it was good to see some new and old(er) faces joining in the fun. With the work to install the new custodian’s room in full swing and several family groups also booked in, the WTMC Lodge was no doubt the most happening place at the top of the Bruce Road on this particular little weekend between the two big summer long weekends.
Here’s what the lodge guests got up to over the weekend:
Medium Tramp

I signed up to lead this Medium trip to the WTMC Lodge as, while I’ve spent many a winter weekend up there attempting various Ruapehu peaks with various alpine tools, I’ve never been to the top in the summer. I was keen to see the crater lake and summit plateau without their full snow surroundings. With this stellar summer, the forecast was promising, but we’d need to be down before the afternoon thunder storms arrived.

On Saturday morning we recruited Tony (up at the lodge for a photo-bagging outing) and Jan (due a well-deserved break from her role as lodge work party support crew) so it was five of us who headed out of the lodge door and strode off up….to the chair lift ticket office! We were hoping for a ride all the way to the Knoll Ridge Cafe Hut but our luck was out as there was some maintenance work going on so we had to walk from Hut Flat. I guess this was a Medium Tramp so we can’t complain about an extra 35mins of uphill to warm up the legs. There’s a well-trodden poled route from Hut Flat up to the ridge above the Pinnacles where ‘The End’ was announced for those who might need a hint to turn around.
The cloud was coming and going. Mostly coming when we had our cameras out and going as soon as we put them away again. We weren’t ready for ‘The End’ just yet so we carried on with the easy scrambling up the ridge and all the way to the summit of Tukino. It had taken us less than three hours to reach the 2700m peak and we were treated with a fantastic view of the summit plateau and even a glimpse of the crater lake. It was too nice to head straight down and we figured we had some time before the clouds settled in so we carried on along the ridge to enjoy further views of the plateau, Cathedral Rocks and Dome Ridge. At the saddle below Glacier Knob we stopped for a quick lunch – there were a lot of flies so it wasn’t that pleasant to sit for long.
From here it was a straightforward descent with a choice of rock-hopping or snow-sliding back down to the cafe. No coffee stop for us as the cafe was closed due to the lift closure so we carried on down re-tracing our steps along the poled route to Hut Flat. As we descended we could hear rolling thunder and the lucky ones amongst us witnessed the odd lightning strike in the distance. Back at the lodge after a 6 hour loop we took hot showers and watched the cold showers outside! And then we also got to watch the lovely coloured sky as the sun set.
Sunday morning saw us fulfilling our lodge cleaning duties and then heading down to Whakapapa village for a gentle leg stretch around the Taranaki Falls loop. We had great fun climbing behind the falls which were surprisingly powerful given the dry summer.
After the 2 hour loop we had plenty of time of kill before we were picked up by the biking party so we put on our cleanest-looking smiles to distract the Chateau door staff from our muddy tramping boots. We can highly recommend the Paris Black tea (try it without milk) and the picture window which perfectly frames Mt. Ngauruhoe.
Biking adventures

Arriving at Wellington station ahead of our scheduled 17:30 departure, we five mountain bikers swiftly got on with the job of taking up as much space in and on the van as we possibly could. With bikes strapped to the back and Emily’s Mt Ruapehu trampers crammed inside with all our bags and wheels, we set off.

Having arrived at the club lodge late on Friday evening the five of us were up early on Saturday morning and hit the road just after eight. Sadly Mike, having done all the work to organise the trip, was unable to ride with us. He graciously offered to drive the van and shuttle us home from the end of the track at Owhango instead.

Rather than driving to the start of the 42 Traverse (off SH47) we elected to ride from the door of the lodge. This added just under 20km to the day’s riding but was almost all downhill and on tarmac: definitely worth doing to save a van trip!

Anything you read about the 42 Traverse online warns you of mud so deep you can’t ride through it, river crossings that can be impassable after rain and navigation so tricky that you can easily end up stranded in the middle of the wilderness. Pausing in Whakapapa we got chatting to a DOC warden who told us that there had been heavy rain and flash flooding in the area overnight. Expecting the worst, we headed off down to SH47 and the start of the track.

As it turned out the trail was often slippery and wet with some fairly deep puddles, but everything was easily rideable with the exception of a couple of stream crossings. One was a wet foot affair but the second crossing reached my kneepads and would be one to take care over if it had been much deeper. We were all grateful to Bryce as he was the only one who had remembered to pack chain lube in his daypack! Navigation was no trouble, the Traverse was clearly marked and the track was obvious. The most challenging part of the day was probably the heat, we were certainly glad for the cloud cover; even though it interfered with what we were told are great views of the mountains. Instead we got some amazing bush and a pretty waterfall to admire.

This promised to be an easier day, with just one climb to begin and then a long descent before finishing off along a gravel road to the pick-up point. From my research the previous evening I was expecting the ride to take from two and a half to three hours.

Mike, chauffeuring again, dropped us off at the start point next to National Park rail station (apparently the café here does great cakes and breakfasts) and promised to meet us at the track end near Kaitieke.

The initial climb was dispatched by everyone at their own pace with, minor bike fettling aside, no issues. Almost before we knew it we began the day’s descent: a gently sloping grass track with the odd rut and puddle but nothing to distract from the great views out across the valleys. The pace stayed very relaxed to make the most of the great views while farm gates made for natural regrouping points. Once we hit the much less scenic gravel road the group picked up the pace, eventually finishing the track in less than two hours. After a little more bike fettling and some lunch Mike arrived to pick us up and we headed back to Whakapapa to meet up with the tramping group.