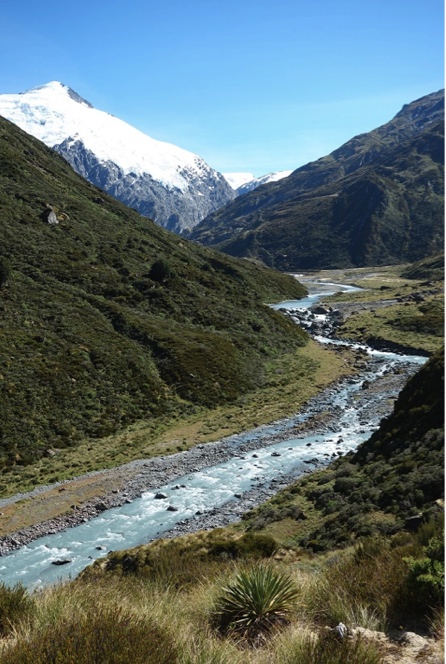 We all arrived in Glenorchy the day before the tramp with high hopes. The weather that day was beautifully sunny and to get off to a good start we had a pre-tramp dinner at the hotel – also celebrating a birthday. However, there were a couple of cautionary notes: the long term weather forecast was mostly predicting rain and we learnt there was another group of 11 also starting the tramp the same day. What if it rains the whole time? Would there be room in the huts? What if there were more groups as well?

The next day (the 30th) dawned clear and sunny. We got off to an early start, booking the 7am shuttle. We were in a full shuttle of 12 trampers and the group of 11 was booked on the 9am shuttle. On our way to the start of the track we saw white-tail deer bounding along the road ahead of us and the driver pointed out film locations in the area.

On arrival at the Muddy Creek road end, our real trip started. For the first few hours the track follows the river bed with some sidling when the river flows right next to the bank. About midday we stopped for lunch where the track enters the bush; halfway to the hut according to the track signs. In the distance we could see the clouds closing in – the weather forecast was right. 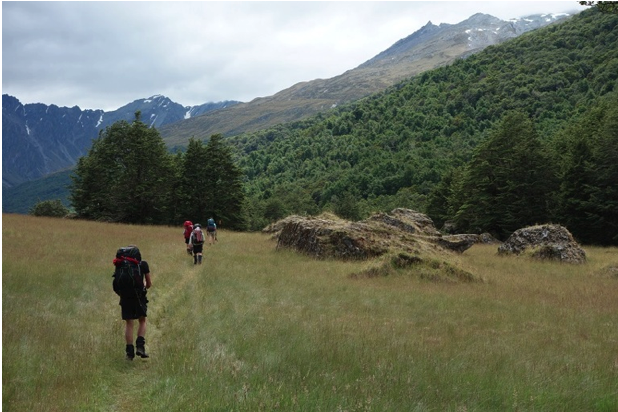 In the afternoon the track meandered through the bush, passing through the occasional grassy flat. At one point we encountered the remains of an avalanche in a side stream we had to cross. The track had been scoured out and there were large blocks of ice still in the stream bed. A bit of scrambling down and then back up again to find the track. At this stage the rain started, light showers only, and we arrived at Shelter Rock Hut before the heavy rain set in and before the group of 11 arrived. 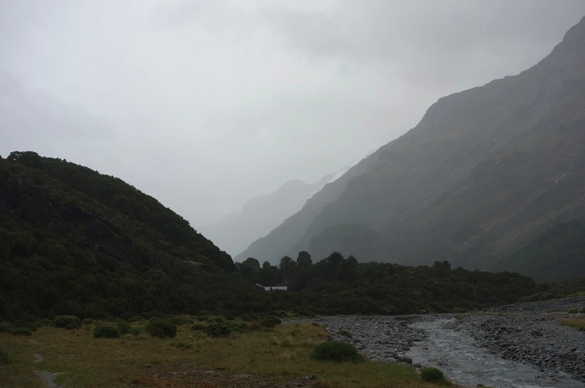 The hut was full for the night, with several groups camping out. Our ranger for the night was very pleasant and we learnt the avalanche remains may have been from two seasons ago because for a while there was an ice bridge over the side stream! He also had good news about the weather: the rain, although heavy overnight, would clear the next afternoon.

On the 31st the rain did not look as bad as predicted. There were intermittent showers but not enough to make the rivers difficult. So off we went up the valley. At one point we thought we could avoid a sidle over the hill and carried on up the river; after a few hundred metres we bush-bashed back up to the track – there was a good reason why it diverged from the river! 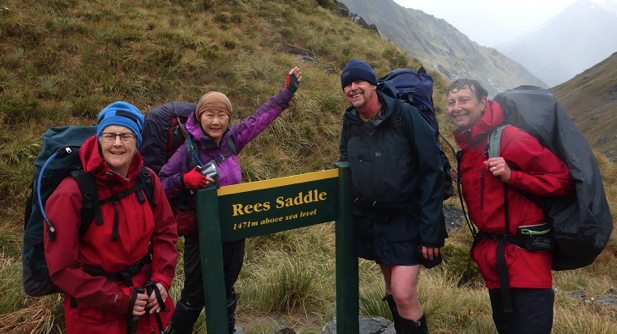 We got to the Rees saddle around midday, still in rain and strong winds. A short, steep final climb to the saddle and we didn’t loiter for long. We opted for lunch in a ‘sheltered’ gully some metres on the downhill side. The track follows Snowy Creek gradually easing us downhill. The rain was starting to clear, the sun was coming out and we could see the mountains around us.

After a final steep descent, we arrived at Dart hut. It’s bigger (32 beds) so there wasn’t as much pressure on space even though there were additional groups who had come from Cascade Saddle. It was great sitting on the veranda in the sun, drying our clothes, resting our feet and sharing stories with other trampers. It was New Year’s Eve and we wished each other Happy New Year well before midnight although some of the younger trampers stayed up until midnight.

New Year’s day was scheduled as a rest day with a day walk to the Dart Glacier or Cascade Saddle for the energetic. Two of us (Carl and David) decided to go for the walk. It was a bright, clear day so we had great views of the mountains. We got to the glacier and Carl went on up the saddle track for better views. After lunch we walked back to the hut where the others had been resting or going for short walks through the bush. It was great to wash all the sweat and grime off us in Snowy Creek in spite of the fact it lived up to its name. Again another evening of relaxing at the hut with an interesting mix of people – mostly Kiwis from all round NZ with a sprinkling of Europeans and Americans.

The ranger updated the weather forecast – sunshine predicted for the next couple of days! There was no great hurry to get to the next hut (the group of 11 had done without the rest day and were no longer be competing for space). The walk was pleasant, gently descending through the bush and winding over the river flats, through to Daleys Flat Hut. A nice hut apart from the sandflies. 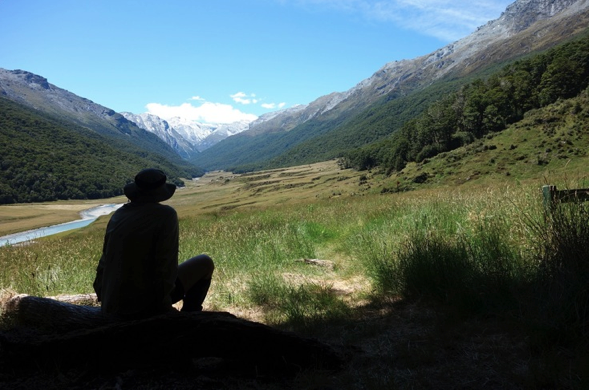 On our final day we would be covering the newly re-aligned and reopened track after a major land slide closed the old track for a couple of years. We also had arranged shuttle to pick us up at 2pm – as had all the other people staying in the hut. We calculated based on our previous efforts we would need 6 hours so we got going at 7am which allowed us some leeway. The track was rougher than the previous day especially on the newly re-aligned section. The slip has blocked the river and created a new lake. 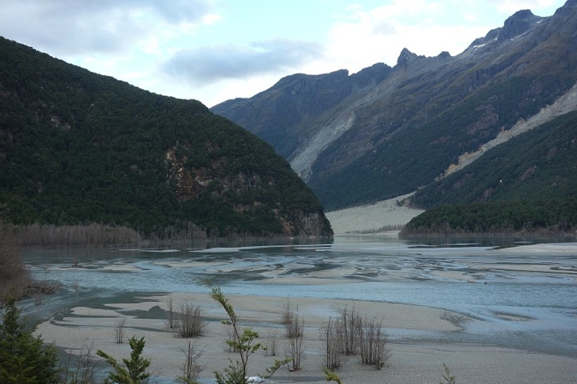 We arrived at Chinaman’s Flat at 12:55pm – five minutes ahead of plan – giving ourselves time to put on lots of insect repellent and have a bite to eat. Our shuttle turned up early ‘because most people arrive before 2pm’ to rescue us from the sandflies. It also meant we had time for a celebratory drink at the Glenorchy Hotel before having to catch connecting transport. 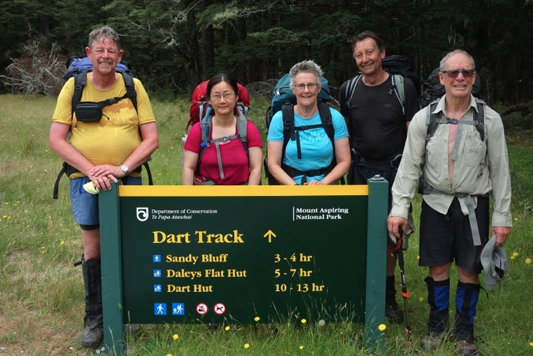 Overall a good tramp through some great scenery. Apart from a morning of rain we had fine weather.