The Coast Road heading south from Wainuiomata provides a picture of New Zealand ruralness so idyllic, it feels a bit like you’ve driven onto a huge scenic calendar. The road winds through a landscape of ideally green paddocks, wooden water troughs and tumbledown sheds. Cabbage trees appear with regular randomness, as if part of a landscape architect’s model, and sheep dot the hills in numbers too few to be of any use except looking picturesque.

The road lies along the western edge of the Rimutaka Forest Park, providing access to this magnificent slice of native wilderness via the Catchpool Valley. Driving east along the access road, the pastoral landscape quickly disappears, replaced by the kind of ancient forest scenery that makes this area one of Wellington’s most popular for day walks and overnight tramps. It was my first time in the park and the weather couldn’t have been more perfect. Too perfect really for practicing outdoor survival skills.

Perhaps because of the fine weather, there were many others who had also opted for a day in the outdoors. The carpark was bustling with people out enjoying the sunshine. Families with young children busied themselves with sunscreen and hats and a large group of students from Sacred Heart College chatted excitedly as their teachers made head counts and bellowed instructions.

Our group was lead by Sue Walsh, with instructors Marie Henderson and Ray Walker. As we crowded round the van in the car park, leafing through our new MSC Bushcraft handbooks, Sue welcomed us to the course and asked what we would like to achieve over the following two days. I asked for some river crossing practice, others requested compass and map reading lessons. As we were to discover, our wishes—along with a few things we may not have wished for—were our instructors’ commands.

Our first task, as we set off along the Orongorongo Track, was to keep count of how many bridges we crossed, the number of side streams and the direction of the water flow in the river beside us. This is easier said than done when you’re walking through magnificent lowland beech forest on a beautiful autumn morning while chatting with your new tramping buddies.

At the Orongorongo river, we stopped for lunch. Sacred Heart, who had been in hot pursuit all morning, spilled out of the forest around us and on to the river bank. We soon left them behind and headed south, following the clear water along the valley to our second task for the day: a river crossing.

Despite the fine conditions, there was a lot we were able to learn, much of it out of the water. With blindfolds on and using mutual support techniques, we edged our way over the stony, driftwood-strewn riverbank trying to “see with our feet”, before getting into the water (blindfolds removed) and trying it for real.

Around mid afternoon, we arrived at Paua Hut where Marie spread the topo map on the table and we all had a go at finding north. Ray then took us outside and showed us how to put up the flies. Although there was plenty of room for us all in the hut, the flies looked so blue and inviting, and the weather was so good, that before we’d even got the second fly up more than one person was talking about spending the night outside.

After a dinner of pasta that was to Italian food what King Kong was to gorillas, we donned our headlamps and made our way to the small clearing where Marie had set up her tent. Also set up was a long line strung between the trees, extending some twenty metres in either direction. Marie produced from her pack a small yellow box which she said was a mountain radio. She attached the radio to the vine-like antenna, and we listened intently as she tuned into the 8pm “scheds”.

Bedtime saw six of us setting up our sleeping bags under the (still standing) flies, with the remainder enjoying the luxuries of the hut. Four people crowded into the lower fly, while up the track a little, Oleg and I had the other fly to ourselves. The night brought what was, for me, a much anticipated event: the sounds of kiwis in the nearby bush. As I lay listening, Oleg stirred. “This is kiwi?” he asked me. “Yep, that’s a kiwi,” I confirmed. “They keeping you awake?” “In Moscow,” Oleg chortled, “usually we are kept awake by alcoholic neighbours.” 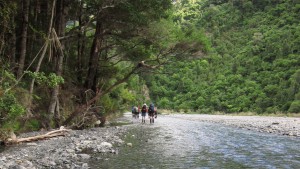 The next morning, instruction began with more from our Bushcraft manual (enlivened by several of Sue’s entertaining cautionary tales from her own tramping experiences past), followed by fire-building practice down by the river. Then we went exploring up behind the hut, picking our way between the mosses, roots and fungi, illuminated by the dappled green light of the beech canopy above. We got a great view of the river below and it seemed we had the valley all to ourselves.

We returned to the hut to tidy up and take down the flies. After a quick lunch, we packed up the last of our gear and planned the afternoon’s walk back to the road end. There were to be two groups: Group A, led by Sue and Ray, would follow the route we took yesterday back out along the track, while Group B, led by Marie, would take “another” route requiring some kind of “special technique”. In the end, there were five of us in group A and six in group B. I was with Marie’s group, so I can’t tell you what Sue and Ray got up to with their bunch (toasting marshmallows by the river and painting one another’s toe nails I imagine), but I can tell you what happened on the “other” route.

We crossed the river and headed up Brown’s Track, a steep muddy staircase leading up to
Cattle Ridge. After a quick meeting of the navigation committee, and a look at Jono’s GPS, Marie announced that we would head off the ridge, down the (densely forested) slope, to intersect the other group as they made their way back along the track below. This is where the “special technique” came in. Using our freshly (ahem) honed compass skills, we were to work our way down the slope in a chain, with each person responsible for directing the person in front of them, allowing (in theory) the whole group to leap frog down the hill in a continuous straight line.

Well, maybe it was the undergrowth being so thick and full of loose, moss-covered rocks, or the trees which always seemed to be standing exactly where your team mate was telling you to walk, or that creek that we were trying to avoid but in fact ended up finding quite nicely thank you. In any case we soon found ourselves unable to maintain our original course. We scrambled and scrabbled down steeper and steeper slopes, fighting our way through vines and branches. When eventually we had no choice but to climb down to the creek and walk along the creek bed, I felt a sense of relief. After the chaos of the trees, it was nice to be on something that vaguely resembled a path.

Eventually, the light filtering through the canopy became stronger and the trees started to thin out. We were able to climb up out of the creek and, moments later, Donna let out a whoop of joy as she saw the bridge and the track ahead of us. Sue and Ray were waiting there and led us back up the track to join the rest of the group.

Despite my lack of gaiters, I’d emerged from the forest virtually unscathed. However, my two days in the bush had left me with a new appreciation for the potential dangers facing the inexperienced tramper and the kinds of skills and planning needed to make any outdoor trip a safe and enjoyable experience. I’d also had a chance to spend time in one of the Wellington region’s most beautiful areas of native forest, and to do so with a great bunch of people with whom I look forward to crossing paths (and rivers) again soon.