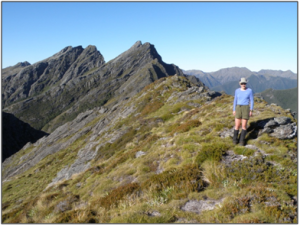 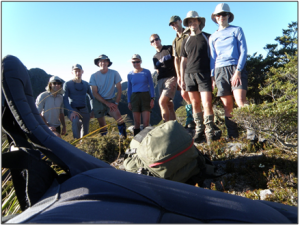 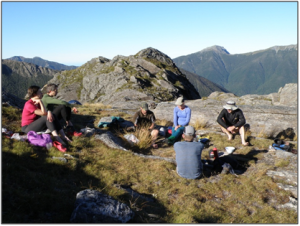 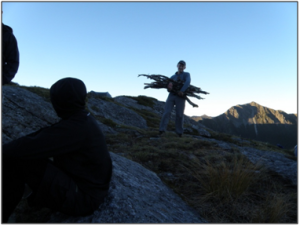 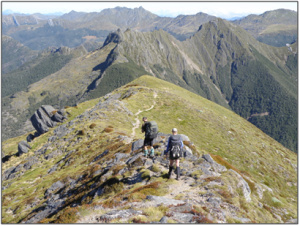 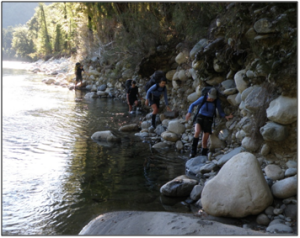 Contemplating our wounds during lunch half way through the scrub bash back to the tops of the Douglas Range, someone remarked that this was like childbirth: we’d forget the pain and do it all again.

That certainly rang true for three of us. Sharron, who’d laboured here with David and me five years before, had organised the trip, and I was among the first to put my hand up. Indeed we had forgotten the pain, because we remembered the Dragon’s Teeth. The astonishing landscape between the Aorere and Cobb valleys of North West Nelson is certainly unforgettable. The country’s oldest rock is folded, faulted, glaciated and eroded through crazily dissected ranges as though the raw material made Nature pull out the stops.

Eight of us were drawn to explore the resulting wonders, just as surveyors, prospectors, geologists and palaeontologists have been drawn since the start of European settlement.
We assembled in Takaka and shuttled to the start of the Heaphy Track. A discreet veil must be drawn over where we stayed. Besides, suggesting that Brown Hut was empty at Easter, that eight people turned up at dusk without booking , took over the place, and left at dawn without Great Walking sounds preposterous.

An hour up the Heaphy a track peeled off to Shakespeare Flat. We followed, and having crossed the Aorere River on a perfect Good Friday morning, we rock-hopped upstream for 3 kilometres.
Sharron and DJ had planned a novel route up a spur to a nameless highpoint in the vicinity of Mt Olympus. A mate at the local DoC office had told them it was ‘do-able’, meaning that ‘people had definitely done it’. Though they didn’t say who, when or why, or indeed whether they had enjoyed it, we knew better than to fuss over trifles, and trusted them implicitly.

Our first attempt to bash onto the spur ended at a wall of kiekie. Our second was successful. A sharp blade led up, and above the lush lower third the beech opened out.

Though the travel was good it was hot and a 1200m climb to the bushline. We had lunch half-way, and took another long break to enjoy the views we finally earned of the Aorere Valley, the Gouland Range and the ancient route Heaphy followed west.

We topped out at 1510m a few kilometres south of Mt Olympus. No Greek gods were there though it was an immortal sort of day, fine and clear without a breath, and it wasn’t hard to believe you were in their realm, heading north along the range with everything beneath.
First camp was on the ridge leading to Mt Trident. The setting was majestic, with the Dragon’s Teeth set in line before and above us, looking more like a single grey adze jutting at an angle. But there was no water. Dirk and Sharron went to find a stream and Kurt, who started the tramp with deep cuts to one foot, struggled back heroically with a pack full of bottles and bladders.

During dinner, a full moon rose as the sun set.

People may well have done it, but there was no sign the next morning bashing toward Trident. Bare outcrops among the dracophyllum and scrubby beech afforded views across to the more conventional route we took last time, along the Lead Hills. The ridge narrowed to pinnacles that gave pause for thought, but proved negotiable, and the intimidating southern flanks of Trident were sidled, bringing us to a saddle where we dropped our packs and scaled the 1490m peak.

The best views of the Dragon’s Teeth were from here. Sharron and David had provided the satisfaction of taking an adventurous route and succeeding. We owed our elation to them.

So it was down from that height to the hut at Adelaide Tarn, rated by some as the most beautiful place in the park, where you swear you’ll return some day and linger. After taking on water we followed the route up to a saddle where the decision is made whether to inspect the Dragon’s dentition or avoid it by heading down into the head of the Anatoki River. Like most without rope, we descended.

A cryptic cairned route weaved among the headwaters’ branches. After the river formed and plunged into a gorge, we climbed away on the true right and bashed around the toe of an imposing spur leading up to Anatoki Peak. The vertical bluffs on one side are joined to climbable ones on the other, interspersed with vegetation ranked just below leatherwood for piercing spikes and dermabrasion.
An old snowfoam strapped to Dmitry’s pack was gradually shredded, marking our route with blue crumbs.

We were all bleeding at lunchtime, which is where this story started, half way up to a camp site perched above the valley. There aren’t many places to pitch tents worth shedding blood for, but this was one: small tarns set in steps on the shoulder of a ridge that is a perfect viewing platform for the surrounding ranges. Here, the Dragon breathes down your neck, with teeth bared above sheer jaws of volcano clastic rock.

From the tarns we could contemplate the route ahead to the Drunken Sailors, gaze across the Anatoki Valley at the Needle, and see all the way out to Golden Bay through a northerly chink.

And we had arrived early enough for contemplation. We brewed up and lazed around, comparing scratches, until Dmitry announced he was off to collect firewood.

Dinner was served and we were starting to worry when Dmitry staggered back with an armload of wood of Siberian proportions. Pyromania is normally frowned upon, but there are those among us deeply imprinted with the primal urge to make the fire on which our survival once depended, and for whom tramping affords liberating opportunities that benefit others.

So we encouraged him. The ensuing blaze kept the hard core up ‘til 8.30, and could be seen from Motueka.

Once again we decamped soon after sunrise. Traversing beneath the jagged slabs of the Douglas Range was slow going last time in mist and drizzle, but cruisy on a calm still morning, and we assembled to rest on a saddle beneath the Drunken Sailors with time up our sleeves.

A pleasant meander down to Lonely Lake, then back onto the ease of a formed track, albeit uphill to regain the ridge beyond the Sailors and complete the traverse to the Cobb.
Tops travel doesn’t get much better than that Sunday afternoon. Easy, with splendours of landscape everywhere you looked, and intriguing changes in vegetation and geology. Mike pointed out rich iron ore on the eroded slopes, and said for no-one to tell Gerry Brownlie.
The route sidles Kakapo Peak (1783m). Only Kurt had the energy to drop his pack and climb the extra 300m.

On completing the traverse by late afternoon, we had the option of dropping to Fenella Hut in the Cobb Valley or camping in a magical snow grassed basin below Waingaro Peak. Those of us who knew the place swayed the doubters, and we were soon lying around our tents as the sun set. The basin is a long, glaciated scoop out of the apex of a ridge, fringed with banks of moraine and gnarled beech draped in blue-grey moss. A massive cairn stands at one end like a Buddhist stupa, appropriate to the place.

There was a hearth and plenty of wood, so Dmitry lit a fire again. Having studied thermodynamics, he informed us that the temperature at the core was 350 degrees C. But at 1350m it fell fast at our backs, and we soon retired.

Monday brought a hard frost and an early start. People were just starting to stir down at Fenella Hut, overflowing as we guessed it would be, so we breezed through and out down the valley, arriving at the road end with hours to spare.

We had come a long way in four days. Unpacking in the heat outside Trilobite Hut, named after a fossil, we started feeling a little Cretaceous. Kurt’s feet resembled brachiopods, I was moving like a nautoloid, and Sharron, infuriated by a plague of bumble bees and wasps, started screaming like a troglodyte.

After a day or so, I longed to go again.