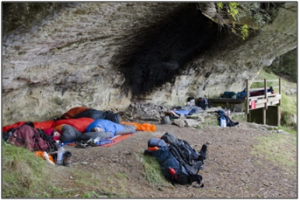 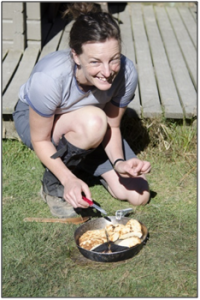 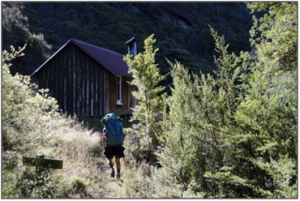 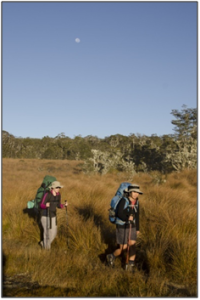 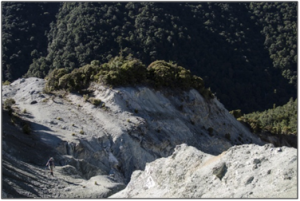 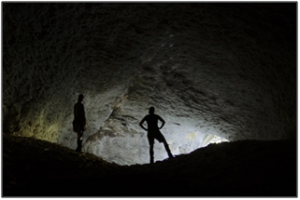 This Easter trip promises to be a sort of easy-going natural history expedition. That’s what Illona’s billing suggests: moa bones, caves, an asbestos mine, a historic hut, rock shelters as well as Kahurangi’s flora and fauna, plus gourmet dining every night.

We arrive late at Flora Saddle car park on the Thursday night and pitch flys in the cool clear night. The next morning weka snuffling around the camp wake us; one cheeky bird almost manages to run off with Craig’s head torch. After breakfast we set off to Asbestos Cottage. It’s very pleasant walking especially after Flora Saddle when it’s all downhill past Flora Hut to Grid Iron rock shelter where we have lunch. We scope out the route to a cave that Illona read about that’s meant to have moa bones in it. We don’t have too much spare time so decide to return tomorrow and continue on to Asbestos Cottage.

Happily Asbestos Cottage is not, as the name suggests, made of asbestos. It gets its name from the asbestos mine which is about half an hour’s walk away. The cottage was home to Annie Fox and Henry Chaffey who lived here for nearly 40 years from 1914. Annie had eloped with Henry to escape an abusive husband. When her husband finally died about 18 years later she and Henry married at the cottage. Coincidentally we are here the day after their 80th wedding anniversary! We say happy anniversary to Annie and Henry and start dinner with cheese and cracker hors d’oeuvres, soon followed by the main course of laksa, tofu and veges with soba noodles.

Barbara and Yukari have secured bunks in the cottage but the rest of us are happy to sleep under flys as there looks to be no chance of rain.

The next morning is as fine as the first. Not a cloud in the sky. Tiring of breathing nothing but fresh air we head off to the asbestos mine. The mine was worked between 1940 and 1964, although asbestos had been extracted from the area in small amounts before then. You may be interested in a small mineralogical aside at this point: Asbestos is the name for a family of silicates all of which have a very long thin crystal structure. There are six types of asbestos; the type here (chrysotile) is the least dangerous as the crystal fibres aren’t as fine as the others and don’t get airborne easily. Also it’s only when asbestos is processed and refined that the trouble really begins. The most dangerous type is blue asbestos (or crocidolite) because it is made up of extremely fine fibrils that can lodge in the lungs. Asbestos is (or was) an extremely useful product. A small selection of things it was used for are: building insulation and cladding, fire resistant theatre curtains, car brake pads, suture thread for use by heart surgeons, cigarette filters (want lung cancer and just can’t wait??), an ingredient in crayons and as artificial snow for Christmas decorations. Damn.

The mine today is a quarried area of soft green ultramafic rocks. There’s not much evidence of the operation aside from that though. It’s not hard to find asbestos fibres in the rock if you have a bit of a fossick. Having seen enough we return to Asbestos Cottage. There’s talk of making some scones but I suggest that it would be wrong to light a fire on such a warm day. Unexpectedly people listen to me so the scone baking is postponed (oops sorry), so we shoulder our packs and head back to Upper Junction. It’s noon by the time we arrive and so we stop for lunch. As some sort of karmic offset for the asbestos mine a pair of whio in the river provide some post-lunch entertainment.

By this stage everyone is feeling very National Geographic so we go in search of Illona’s diligently researched moa cave. The route to the cave starts beside Hodge Creek on the track between Gridiron rock shelter and Upper Junction, and here we drop our packs. It’s a steep bush bash but there’s a marked trap or bait line that weaves up through the beech trees and marble tomos and outcrops. With the help of a GPS we find a cave in approximately the right spot. Barbara hasn’t got any troglodytic tendencies so waits outside poised to raise the alarm if we don’t return, but the rest of us are in there like rats up a drainpipe. It’s cool. I mean the air is cool but the place is also cool. It’s nice and spacious and goes on for some distance. Moa bones (already neatly lined up… we certainly aren’t the first to go in here although it feels like it) are discovered not far from the entrance. There are also quite a few lovely cave weta hanging out on the roof, one of which jumps on Megan. The going is easy and it’s quite exciting so we keep on walking. After 15 minutes of slow exploration we come to another entrance to the cave; much larger than the one we entered by. We turn around and slowly retrace our steps nurturing our inner spelunker as finally we end up where we entered and re-join Barbara.

Unfortunately Craig tweaks his knee on the descent back to the main track. He’s still mobile and the track to Salisbury is excellent so although sore he can continue. We’re not too sure where we’re going to camp tonight, but aim for Dry Rock Shelter which is about 1km short of Salisbury Lodge. We’ll also assess Growler Rock Shelter which is on the way only 1km from where we are now. Growler Rock Shelter turns out to be very small and immediately beside the track. An ideal place for a DOC toll booth, but not for us.

We arrive at Dry Rock Shelter in good time. There’s space to sleep about a dozen including on a wooden platform built under the shelter as well as a large flat area of compacted dirt. A family of three arrive at the same time but I think they’re put off by our numbers and leave for Salisbury. Then a couple of guys in their 20s turn up. They seem a bit displeased by our presence, which is somewhat concerning as one of them is carrying samurai sword. It’s one of the more impractical bits of tramping equipment I’ve seen but I guess not as bad as carrying a parking meter… or a Stairmaster maybe. Anyway head chef Illona with help from a couple of sous chefs cooks another fantastic meal of smoked salmon with shiitake mushrooms and about five cubic metres of mashed spud. The two guys have warmed up a bit and fears of a samurai bloodbath have eased by the time we hit the sack.

I get up early in the morning hoping to get some good photos in the dawn light. It’s misty and the light isn’t great and I should have stayed in bed, but that’s the way it goes. Eventually everyone is up and the sun burns off the mist to reveal another fantastic day. We’ve got an epic easy walk this morning; all of about 1km. It takes half an hour to get to Salisbury Lodge. All of last night’s occupants have left or are leaving and the fire they made in the woodburner has burnt down to embers ideal for scone baking. Within minutes Illona has made a batch of scones in a frying pan found in the hut. The fire is hotter than expected and they burn underneath, but a bit of scone surgery fixes that. We eat them with butter and jam. Easy tramping at its best!

Illona, Kate, Jo and Yukari go for a day walk up to Gordan’s Pyramid. The rest of us laze around the hut. Eventually Megan and I go for a short walk on the Sphinx Valley track. I’m keen to look in Sphinx Cave which is at the base of Mt Arthur and has a stream flowing into it. I’d been in it about 25 years ago and at that time got a reasonable distance in, but this time some flood debris had blocked the way not far in and it looked muddy and uninviting. Mt Arthur alone has over 72km of surveyed caves under it. I’ve only been in one lengthy cave and that was on a school camp at Rotoiti. Our ‘outdoor instructor’ took us down a cave near Mt Owen. I remember our safety briefing was being told to wear a beanie as protection in case we hit our heads on the rock. It was great and only one of my classmates nearly died. Sometimes I wish I’d got into caving but I’m too old and soft now.

Back at the hut pasta with sundried tomato sauce and parmesan is on tonight’s menu. If that’s not enough Illona makes some Easter nests for dessert (cupcakes containing a melted 62% cocoa Whittakers chocolate and golden syrup mix topped with chocolate eggs). Full of cocoa and sugar we go to bed with wide staring eyes.

The last morning dawns brilliantly fine yet again. Craig leaves for Flora Saddle before us as he’s concerned if his knee really packs up he could delay us getting out in time for the ferry, but he ends up easily beating us back to the van. The walk out is idyllic and I can’t believe how good the weather has been (I must be too used to the Tararuas). We stop for lunch in Motueka before continuing to Picton where we arrive in plenty of time for the ferry. It has been one of the most interesting and fun trips I’ve done. Thanks to Illona for organising everything (especially the food) and to Barbara, Craig, Jo, Kate, Megan and Yukari for the great company.