We: Mike, Sharron, Michael and Me (Brendan), met at platform 9 on the Thursday evening and all headed to the ferry terminal.  The 3 hour ride across the strait was calm, dinner was served and 500 was played, Sharron didn’t do so well on the 500 front, but like the crossing remained calm.  At the other end we collected our little white steed to carry us the 2 hours to Kaikoura, it performed its duties and we arrived at the road end a bit past 11, tents erected quickly and with little chance of rain or wind guidelines were left coiled.

At 7am the troops were up 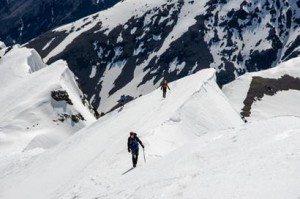 sorting food and removing any last weight from our packs.  We set off up the Hapuku river current elevation 100 metres; by the end of the day we hoped to be at the high camp around 1900 metres, so a big day was ahead.  The first part of the river was pretty easy going: a few crossings and generally quite flat; we took a detour along a marked track after a waterfall to avoid a gorge. On the other side of the detour we came down the river a short distance before turning back upstream at a fork in the river.

Here we encountered some larger boulders and navigation up the river become slower.  We made it to a large river bend where the river opened up and here we took our lunch at around 12 and 600meters higher than when we started.  Conversations during lunch were centred on the large scree slope we would soon be climbing.  After lunch we started our accent up the scree slope and onto the ridge, for the next four hours we battled with scree, loose rock, and scrub along the ridge line until we finally reached the point where the ridge flattened out and we set up camp for the night at 1900 meters.  We watched the sun set over the ridge line we would be travelling along tomorrow and retired for the day.

At 6am, after a windy night, we were again presented with sunshine and calm conditions.  After breakfast everyone grabbed what they needed for the day and headed off up the ridge toward the Manakau summit. The snow and ice that covered the ridge presented much better conditions than the day before; progress was good. A few traverses to avoid extra climbing and to avoid large rocky scrambles were made, but on the whole the ridge line was a fine path to follow.  The group reached the summit around 3 hours after leaving camp and after a few happy snaps we went back down the ridge.  On the way back, to save time, we dropped down one of the gullies into the basin between camp and Manakau and then back up the other side to our camp site, bags packed and back down the rocky part of the ridge.  The down climb was made more difficult due to the indifferent rock conditions and steep scree slopes. We eventually headed for some snow to make the journey easier, but apart from Michael’s boots skiing technique it didn’t prove to be much quicker.  After a few hours we finally made it back to the saddle above the scree slope overlooking the spot where we had had lunch the day before. The saying boys will be boys was probably quite apt as the downward journey on the scree slope was taken quickly.   We set up camp on a flat grassy area above the river and again were in bed early.

Sunday, we set off early back the way we had come in, hoping to get to the car early e 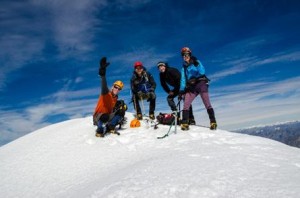 nough to get to Picton to catch the 2:30 ferry.  We got back to the car just after 10 and made the call to see if we could change onto the 2:30… we were out of season and the best they could offer was the 1pm ferry. So, instead of rushing up to Picton we decided to take the car into Kaikoura to check out the town.  On the way in Sharron confirmed that last time she was in Kaikoura it was full of hoons and had been bitten by a dog in the main street, Sharron also mentioned she would like to have a go at marketing and her first point of call would be to sorting out the Hamilton ‘More than you would expect’ tag line.   We also saw some seals, used up some fat boy credits and made it back onto the ferry where, again, Sharron lost 500.