onderful side trip to the stunning Travers Falls, a few of us decided to tackle Cupola Hut.  DOC’s estimated time was 2.5 hours to the hut and we saw from the map that we would have a 500m climb just before reaching it. 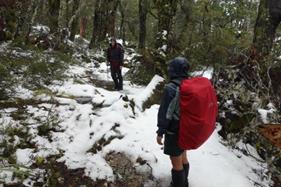 Our honourable leader did not think we could make it in time and gave us a stern warning about being back on time which made us even more determined to try.

We followed the river in stunning bush and in some areas enjoyed the beautiful vivid moss at our feet.  As we were a silent bunch, mainly focusing on the time limit to reach our destination, we soon realised we were starting the first of our ascents.  Surely this couldn’t be the 500m climb before the hut?  And, it wasn’t.  So onwards and upwards.  A light drizzle began, then it became slightly heavier which made progress slower.  As always, whenever a climb is involved and it’ 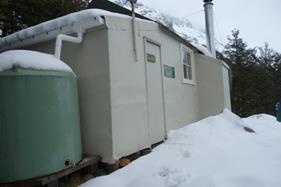 s behind you, you tend to feel slightly relieved that you have one hurdle out of the way and you’re a bit closer towards reaching your goal.

A change in terrain saw us attempt a river junction crossing where various rivers joined into the one.  Because of the continuous rain all throughout the weekend it was thought we may experience a bit of difficulty, luckily it was quite narrow and not much contact with the actual river itself was involved.  Hurdle two accomplished.

Continuing further into lovely bush we came to a fast flowing stream.  Finding the easier way to cross, hurdle three – done and dusted.  We now found ourselves at the start of our last climb – slowly, and cautiously we climbed!  The good news, after all our efforts, was that we 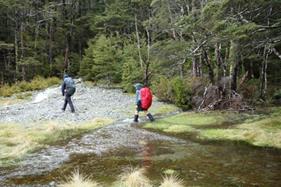 were starting to reach slabs of snow which was a very good sign we were nearing the top.  Also the tree line could now be seen further ahead.  During this ascent various glimpses of Mt Hopeless could be seen to our right which seemed more majestic the higher we climbed.  Throughout our travels to reach the hut, we noticed that the tracks resembled mini waterfalls due to the amount of water and also avalanche debris that needed to be navigated.

An hour and 50 minutes later we reached Cupola Hut.  The track leading up to the hut had been covered completely in snow.  At this point it was only fitting that photos be taken outside the hut expressing our proud and excited moments of joy.  A couple of members of the group noticed a shovel hanging above the door, we could only assume for the purpose of digging your way into the hut (that surely would be an adventure!). Still feeling the effects of the elements, limbs very very cold, we were glad to be entering the hut, and to enjoy our well deserved lunch.  As the temperature didn’t get any warmer inside the hut we decided to have a quick lunch. 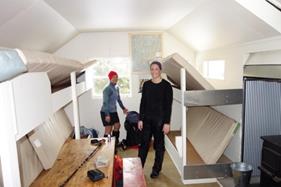 More poses outside the hut, then we began our descent.  As is the norm when descending, progress is much quicker.  When we reached the bottom we met a couple of trampers on their way up to Cupola Hut.  They were grinning from ear to ear when they discovered we were on our way to John Tait Hut as they gleefully informed us that we would be spending the night with 9 members from the Tararua Club, plus their loud snoring friend who had had an accident and decided to walk back to the hut.  We were ok with that as we had our bunks – no probs!  So a very satisfying and rewarding side trip to Cupola Hut meant another hut bagged for us that weekend.