The trouble with a working world is that we never seem to have enough time to complete the trip that one wants.

This year was different and Anzac day fell on a Wednesday so with just two days leave we could manage a full five day trip. Plenty of time, none of this let’s run up to the hut by 2pm to avoid a passing cloud, this was to be a relaxed and dignified excursion.

There were six on this trip: Debbie, Yao and Weiman, Derek, Ann and myself.

Five WHOLE days to relax and enjoy the sun and view!  What could be nicer than a carefree cruise up a silken lake followed by a leisurely stroll along a braided Travers river closeted by hills up to Mt Travers beyond.

Five days food is good when carted by a boat but not so hot on the back.  So you can imagine the horror when it was found that the Lake R 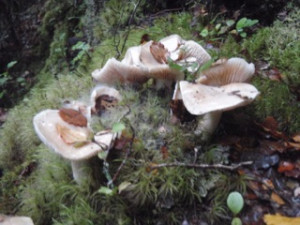 otoiti water taxi was a thing of the past, it is no more, it had blown a gasket and was cancelled for the foreseeable future.  Not only must we carry our five days of food but carry it for another eight kilometres turning a twelve kilometre day into a twenty km day.  What a nuisance!

Still Wednesday dawned fine and it was wonderful to see the western side of Lake Rotoiti and the lake from land rather than water.  It is a pleasant track open in most places with lowland bush crossing the occasional stream and after a few hours we reached Lakehead Hut.  Lakehead is a new hut in good condition and being out of summer months it was empty and we had the whole valley to ourselves.

The sun was out and only a trace of breeze, a perfect day for tramping.   We made steady progress up to the swing bridge which crosses the Travers river, a pleasant place for lunch.

We were making good time and with little fuss arrived at John Tait hut shortly before dusk.  Time for tea, a vegetable bolognaise followed by a fruit and yoghurt dessert.  What better way to start to 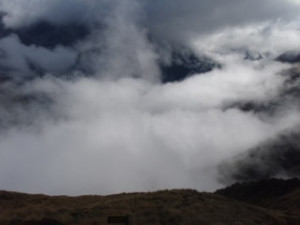 a training school in Cards101.

Thursday was overcast, grey sky but little wind, great tramping weather.  We gradually  gained the 800m up to the Upper Travers Hut viewing many coloured mushrooms gathered around the track. The clouds too were gathering and whilst we arrived mid-afternoon at Travers Hut it was too late to attempt the Travers Saddle which would wait for tomorrow’s day.

The weather had other ideas however and in the best southerly tradition the wind and rain settled in around evening. We were glad to be indoors and the Upper Travers hut proved to be a pleasant companion right through the next day with the rain drumming on the roof.

Rain means relaxation, and relax we did, this is the life, comfort and cards!

Whilst we gained 500 expertise the rain did not relent and this combined with low cloud was going to make the crossing of the Travers saddle difficult.  For an EM trip this would probably mean that a traverse back down the Travers valley would be the most prudent path forward.

The rain continued through the night and was still raining at 5.30am the next morning getting close to our decision point at 6am.   It would have been sad to have abandoned the crossing but then again it is never sensible to compromise safety.

Then at 6.15am the rain relented and amazingly the sun came out.  The morning had dawned fine with sunshine and steam rising off the trees around us.  The track was softened but still firm as we left the hut and made our way up the hill to the saddle wit

h a filled creek burbling alongside.

It was calm and beautiful and Mt Travers revealed its head for the first time in a few days with early winter snow still patchy on the tops.  We reached the saddle by mid-morning; Mt Travers was in its glory.

Taking our time, we meandered along the tops enjoying the sheer falls below and clear contrast of the surrounding hills. It was a beautiful day and in the form of a weather window we watched as clouds gathered again beneath us and slowly came rolling in along the Sabine valley promising more cloud cover late in the day but clear views for the time being.

We slowly came off the saddle heading towards the Sabine Valley below, and as we descended the clouds rose to greet us.   The land is steep here and past landslides have punctuated the track at various intervals.  At one point the track crosses a hardened scree slope with open boulders beyond, an avalanche alternative was apparent and our scout team believed that this would be a preferred route with the advantage of sha 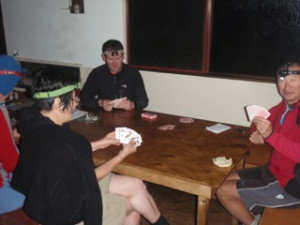 dy trees. This proved to be correct for a while but the slope became steeper and steeper heading towards a toe-nail removing grade.  A bit rough for an EM, as indicated by some of our punters, but great fun all the same. Still all good things must come to an end and all too soon we re-joined the main track and headed to the Sabine river beyond.

Recent weather had been harsh, however, and the Sabine River swing-bridge was washed out.  Still, we were on the right side of the River for the West Sabine Hut. Evening and pre-breakfast 500 awaited and tomorrow was another day!