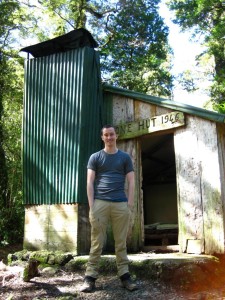 The sun shone strong on our transit as we wound along the highway north oh Featherston. The unseasonably warm and almost cloudless sky illuminated the countryside’s early spring greens. So marvelously distracting was the prospect of a golden weekend, that navigator couldn’t be blamed for the missing the first turn off, but perhaps he should have pointed out the second one.

After two u-turns and a short trip along the shadowy Waiohine Gorge, the four of us punished the porcelain and donned our packs. A short walk led us to the swing bridge that marked the journeys start and testament to the weather, the river ran high as winter quietly melted away many miles upstream.

The track was dry and the climb to Cone Hut was steady. After a few rest breaks we reached our destination, an easy-medium amount behind the track time. A billy went on the burner and a leisurely lunch ensued. Cone huts picnic table served our needs but the prospect of having to stay any longer inside Cone would have been less than leisurely.

After lunch we left for Tutuwai Hut and along the way we passed a pair of gameless hunters. On the approach to the Hut we decided that the grass area out the front of the hut would be the perfect place to practice pitching the fly. Our blue Huntec tarp went up quickly and was surprisingly large for the weight of the package. 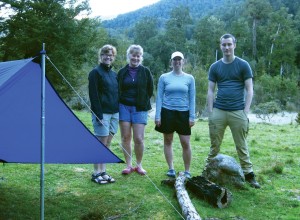 After we packed away the fly and gathered the firewood, we found ourselves retreating to the hut for the night, and with the help of our 3 lovely hut mates Megan lit the coal fire. It seemed the trick was to have the fire steadily burning before the addition of the coal. The folks sharing the hut, two women and a man, were all from Wellington, the bloke was a member of the Tararua Tramping Club. It was a nice evening spent discussing tramping stories around the dinner table. Our dinner was a delectable cream cheese smoked salmon pasta with fresh veges and, for the brave, a touch of homemade chilli infused olive oil.

With the deft skill of a master card manipulator, albeit a rusty one, Tim showed off a few tricks before we moved to a game called scum. Scum is a highly competitive and easy to learn game which plays like a cross between Last Card and 500. We didn’t even know each other’s names but we were quickly calling each other Scum across the card table (part of the fun of the game). 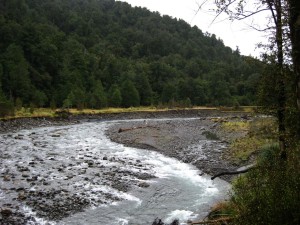 The next morning we woke and ate brekky while the day’s rain passed, and then we hit the trail again. After lunch the sun came out. It was warm on our backs and if not for the cool breeze and the muddy descent into Kiwi Ranch it could have been summers day on the track. Minutes before we reached Kiwi Ranch, David Heffernan & Weimen Ren from the fit trip met up with us on their way back from Alpha hut, and after 10 minutes sitting on the grass outside Kiwi Ranch the Transit snaked its way up the driveway.