Our trip began on Friday evening at The Pines, Wairarapa. The advertised trip had been to do the Northern Crossing starting at the Poads Road End, near Levin and ending at The Pines. However, 90 kmh forecast winds on the Saturday evening and Sunday morning meant we needed to change our plans. So the altered route was to get to Mitre Flats Hut on Friday, on Saturday do a loop walk up to Mitre Peak, over to Girdlestone and back to Mitre Flats Hut via Mid King Biv and walking back to The Pines on Sunday.

We meandered our way along the Barra Track accompanied by a fit group on Friday night. The evening was very warm and although there was a lot of slipping and sliding along the dark, root laden track we all made it to Mitre Flats Hut in just under 3 hours.

We awoke reasonably early on Saturday morning as the fit group had plans to get to Carkeek Hut that day. After a brief discussion between our respective trip leaders, we made another alteration to our plans and decided to still head up to Mitre Peak but we would go over Table Ridge and down to Cow Creek Hut for the evening.

We made the grunt up to Mitre Peak under graying skies which eventually developed into intermittent downpours for the rest of the day. The ascent to Mitre was relatively straight forward but once above the bush line the wind started to pick up and it made for less than pleasant conditions. Once at the top of Mitre Peak we toasted our success in a quick round of fist bumping and continued on for Brockett. 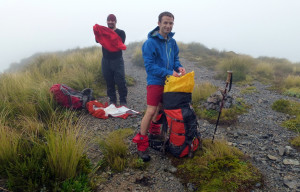 At Brockett, we went off the typical Northern Crossing route and headed for Table Ridge. By now the weather was well and truly against us with heavy rain, dense cloud and whistling winds but there were the occasional brief moments of expanded visibility. This would prove essential in our navigation over the ridge as obvious reference points were few and far between and none of our party had used this route before.

With Emily and Andrei taking the navigation lead, we traversed the various peaks along the ridge until we reached a point that, on the map, indicated that we should start descending down a spur to Cow Creek.  As we moved downwards there was no obvious track but somewhat fortuitously the thick cloud parted and we were able to make out that we were slightly north of the spur that went directly down to Cow Creek. After a few minutes of leatherwood bashing we were back on track and followed a cairn laden trail to an orange triangle marked entry point at the bush line.

We had expected to be following a vague route but DOC had been busy and it was a well cut, marked path that connected up to a junction with the Arete Forks Hut track. After the junction the drop steepened and we ended up looking directly down on Cow Creek Hut where our cold, soaked bodies looked forward to a warm fire.

It has here that the most awkward moment of the weekend happened. The fit group had also decided to come to Cow Creek Hut as an alternative to their original intentions. They had thought better of going to Carkeek given the weather and other factors. There had been quite a misunderstanding at the trip leaders morning chat (perhaps created by the homo-phonic nature of the words “Cow Creek” and “Carkeek”?).

Further adding to the awkwardness was that there were already three other trampers ensconced (largely catatonic on the bottom bunks) so this meant that there were 13 trampers trying to fit into a six bunk hut.

It was very tough to assemble the tent flies in the rain. Luckily adjacent to Cow Creek Hut is one of the best tent sites in the Tararuas and we assembled the flies so that the entrances were facing each other creating a shared eating area. The members of the fit group helped out by boiling some water, providing bed rolls and ground sheets.

(Full disclosure – the author spent the night on the floor in the warm, dry hut so can’t comment on the comfort of sleeping under flies in the wind and rain.)

It was still raining in the morning. The fit group left early to get to the van at The Pines via Mitre Flats Hut. In a negotiated concession they agreed to pick us up at Kiriwhakapapa Road End (we got them when they may have still been feeling slightly guilty) at 3:00 pm.

It took around 4 hours to make it back to the road end with a brief lunch at Blue Range Hut.

The sun came out as we arrived at our destination allowing us to dry some gear until the van to take us back to Wellington arrived at 3:00 pm.

Photos from Guillaume and Emily. It wasn’t really a camera-friendly kinda trip!