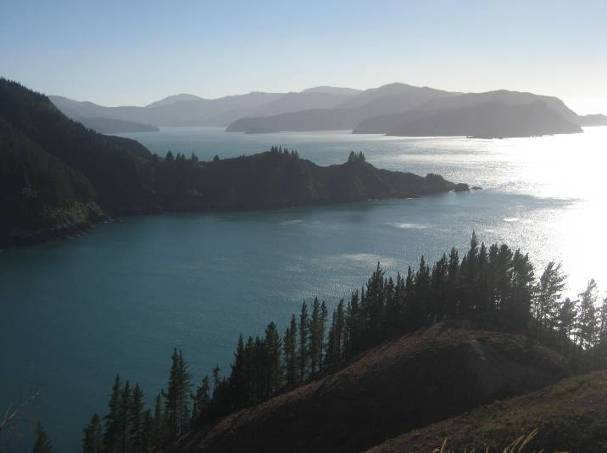 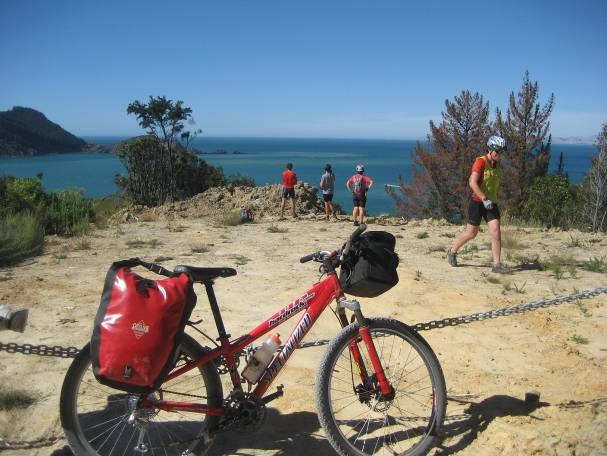 At the end of February six punters (Harry, Roger, Nicole, Rita, Mika and Hans) gathered on an early Saturday morning at the Bluebridge terminal with their bikes, awaiting the moment when they would be allowed access on the oh-so luxurious ferry to Picton. A lazy start of an active weekend; as hours passed by and the Saturday Dom Post was read in detail, including the puzzles, and caffeine-addicts were able to get a shot, we were getting closer to the start of a good ride!

As Picton would be the only spot to stock up on food, we popped in at the Dutch bakery and bought ourselves some crisp bread and yummie pies. Carbo-loading may sound like something for ultra-sporters, but it’s actually quite pleasant!

The circular route we would be taking along Port Underwood required a major choice, and taking into account there was a slight northerly, we quickly opted to head south towards Blenheim over the highway. Not very interesting, but by doing the route anti-clockwise we kept the nicest stretches for the remainder of the weekend.

Less than an hour into the ride, Roger made us believe there was an interesting stop at a major highway junction. While most of us were counting sheep and trucks, he cycled back and started looking for a plastic lunchbox someone else had left behind. Apparently Roger’s fresh geo-cache rage seemed to be contagious, so in no time we all participated in looking under the flax, near the trees, behind rocks and in caves expecting to find a hidden lunch box with a small notebook and some silly contents. To cut a long story short, a few km’s down the road we found ourselves admiring the Millennium Monument (if anyone of you played Lotto before the year 2000, you have sponsored this rock with two holes – thx!), and a cry from the nearby shrubbery indicated that the cache had been found. Another twenty minutes and we explored two glow worm caves, but none of us had a clue where to find the related geo-cache this time.
Meanwhile the cycling got more interesting, as we left the Wairau valley below us and cycled up some steep bits along the beautiful coastline. As a good reward, nearly all of the larger climbs had a nice viewpoint.

The first day of cycling ended rather early as we arrived in White Bay, which is named after Black Jackson White, a negro who escaped from a boat and lived with the Maori on the coast for the rest of his life. While enjoying the sunny weather, the true heroes amongst us found out that the sea was not just cold, but freezing. Global warming has its limitations! The DoC-camping at White Bay is quite pleasant, and offered also some opportunities for short walks in the nearby native forest. The remainder of the day was spent exploring the beach and the rocky arch (where’s the cache?), stretching and yawning, cooking and tasting Auntie Rata’s veggie couscous and feeding the occasional mozzie or sandfly. No problem in finding volunteers to keep the tarp down! 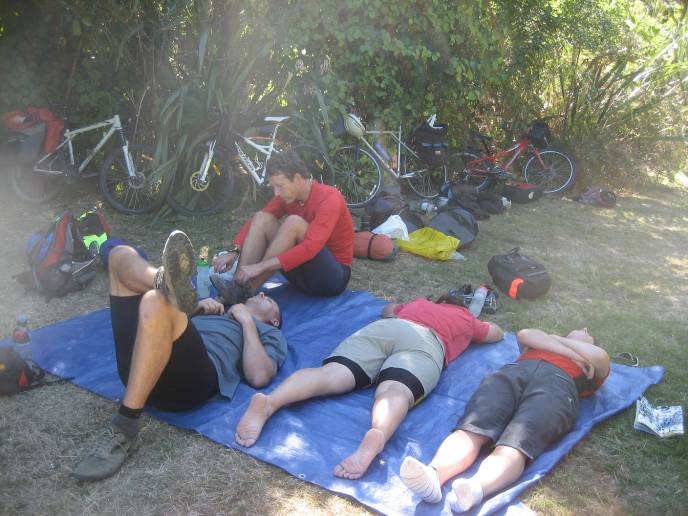 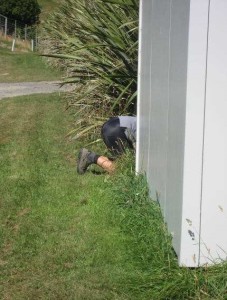 Although we had not intended to sleep in, the waking-up by the DoC officer at 5.30 was a tad early. We were informed a major earthquake had occurred in Chile and there was a risk our lovely camping spot might be flooded by a tsunami in a few hours time. Having experienced how cold the sea was, we agreed it would be better to seek higher grounds and hit the road. We were closely watching the sea, and actually walked up to a nice high viewing spot at the predicted 08.30 AM arrival of the wave. At that point we had no knowledge of the severity of the tsunami, and considered it might have an effect on our road trip and possibly on our return sailing.

Fortunately the waves were rather small and only caused some mud in the bay to stir in semi-circular patterns: quite interesting to see, but no real worry. By now we started to wonder whether the DOC officer might have been overworked and made up the story to guarantee himself a quiet Sunday morning breakfast without any visitors on the campsite. Anyway, distraction was offered by the gravel road going up one hill, down another one, and up again – some sweat was lost but the excellent scenery and a motivating group spirit made it a nice experience. Nicole and Rita had even personalised their bikes and their twowheelers Ruby and Julia were skilfully guided. 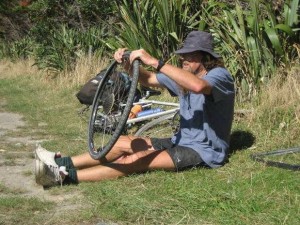 The weather was sweet and occasionally there was a stop for a third breakfast or a second lunch, a geo-cache or eventually a beginners course in sailing (as demonstrated by Harry in the photo),

After the last big hill of about 400mtr we concluded that the real aim for this sunny day should be a huge ice-cream! Picton was only two caches away (under the large flax bush near the sea, and near the geo-mark at Kawaka point), so we had plenty of time to check and compare icecream varieties, pies and further healthy drinks.

As so often, the ferry trip was not the most interesting part of the trip, but hey – not everybody can tell they’ve cycled the Underrated Underwood Tour – better than the Grape Ride!