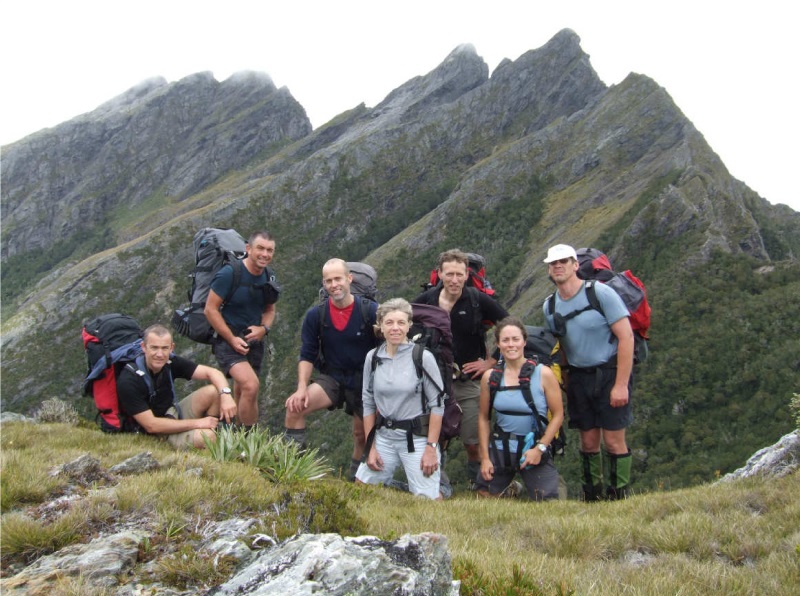 We began with a beautiful morning on Friday 2nd April, clear blue skies & no wind at all. Heading up Brown Cow Ridge we eventually reached the bush edge & then sidled across to where the track drops to Boulder Lake. Here wonderful views of Boulder Lake, Green Saddle, Dragons Teeth etc opened up in front of us.

The track up to Boulder Lake is really good travel; past Boulder Lake hut though we struggled through a long area of flats with really deep tussock, no fun to travel through at all. I wonder if we missed a route away from the river closer to the bush edge. As the flats narrowed we eventually picked up a good cairned route leading up to Green Saddle. We arrived there rather late as we had numerous hold ups the first day but it was approximately 7 hours travel from the road end to the saddle

Drop off the saddle to the south of Green Saddle & you should find water just a few minutes down the hillside in the gully draining the pass. Reasonable tent sites for 4-5 tents can be found around here as well.

Dinner in the dark was slightly chilly as the breeze had picked up slightly, but we had shooting stars, satellites & stars a plenty for company

Next morning we set off & sidled around to the next saddle to the south, we then headed up Pt 1450, sidling it to the west until near the top. In doing this I believe we possibly missed a route sidling down from this second saddle to the eastern slopes of the ridge off Pt 1450.

There is no need to climb this peak as when you follow the ridge down from here to where it climbs again and becomes difficult, the track actually drops well below the ridge on to the northern slopes below where you pick up cairns & a track that sidles down & through the bush some distance below the ridge until they eventually merge & you again follow the ridgeline where travel is more straightforward.

Looking back up we appeared to see a trail sidling down the face from the saddle above which would have bypassed Pt 1452 altogether, good views from there though if you have the time and energy to go over it anyway. There is a fantastic outlook to Adelaide Tarn, the Dragons Teeth, Lead Hills etc.

The route along here is strong and easily followed in good weather
Below pt 1488 we meet a couple of Collingwood locals, (the only people we saw until Fenella Hut), they gave us a little route information for the route down to the Anatoki River which was to come in handy later. The line of cairns continued on & then turned up the hill leading you up to the Needles Eye, from where we dropped down to Adelaide Tarn where we had an early lunch. This is truly a place to linger, a gorgeous spot where I could easily spend a few days, perhaps having a recce over to the Dragons Teeth without packs while staying there. This was my favourite spot on the whole trip, just a stunning place to spend some time in fine weather.

Heading off we again followed a good line of cairns up the slopes above the hut till near the ridgeline above, here we reaped the benefit of the local’s knowledge of the route. They insisted that it was much easier to leave the cairns heading left here, to instead turn right near the top & start along the route to the Dragons Teeth following that trail down to near the scrub line from here, where on the slopes below Mt Douglas, the travel is apparently easier & more open with less bluff’s than the more eastern route the cairns would lead you down.

At the top we just stared & took photos of the impossible looking rock spires rising in front of us, here was the Jewel in the Crown of this trip, (the Dragons Teeth) they were looming in front of us, with the Anatoki Peak ridge beyond. We were just so thankful that the weather continued to hold allowing us wonderful views of this amazing place.

We dropped through the bush, good open travel, until eventually hitting the stream below somewhere about the 1100-1200 metre mark, (I forgot to check my altimeter for the exact height)

As soon as we hit the stream we picked up a cairn & continued to follow a reasonable cairned route staying above the stream bed on the True Left all the way down to Pt 744 where there are great campsites with an established fireplace right beside the river. This was approximately 6-7 hours travel from Green Saddle

Along the way we kept finding items lost or discarded by previous parties through here, about halfway down to the Anatoki from the bush edge we came across a shoe, in good condition it had probably been tied on to the outside of a pack & worked loose, an hour or so we found it’s mate and then below there a walking pole. Somebody was being awfully careless with their gear.

Another interesting find was a proliferation of Giant Snail shells. These were very common, we saw numerous examples of these, though none with a snail in residence.

After investigating the bank on the other side of the river from the campsite & checking out the bluffs in the bush slopes above here we decided that the route must lie elsewhere, a few of us took off for a recce and Hans finally returned saying he had discovered some old but substantial cairns approximately 10 minutes below the campsite. These were on both sides of the river & obviously lead off up the hill above. This was good enough for us so we intended to follow these the next day.

That night we had a great Dehy meal followed by a fantastic Chocolate Mouse & once darkness fell we were kept awake by a chorus of bird calls, Moreporks, Wekas, Kiwis & other I didn’t recognise, fabulous to hear & see the diversity of bird life down here, both day & night.

That night there were a few showers & we thought the next day might be miserable but the rain cleared & the morning was cloudy with little wind.

We dropped down river to pick up the old cairns, very overgrown, these lead off up the hill and had obviously been there a long time, we lost them for a while but picked them up again a bit further up the hill & were able to follow them all the way to the top after that, again good travel up through fairly open bush. Unfortunately there was a healthy wasp population all through here & as we ascended there was suddenly a chorus of cries from behind us & members of the party suddenly started flailing around & were running off in all directions. We must have disturbed a nest as a number of wasps had suddenly attacked the second group as it passed where we had just been. Five of the seven of us were stung & everyone seemed to have the stings swell up alarmingly, a couple worse than the rest, Hans particularly was to be affected by these for the rest of the trip as he was stung on the calf & it swelled up alarmingly.

Further on we came upon one of the fattest Weka’s I have ever seen, he wandered around just in front of us for ages seemingly quite interested in what we were up to.

As the trail broke out of the bush & up on to the tops, it then turned north and weaved around to a saddle north of the Drunken Sailors where it then dropped down into the valley leading down to Lonely Lake.

We had lunch here about 3 hours after leaving the campsite in the Anatoki, from here on in we followed a good track for the rest of the trip, it climbs up through the bush above the hut, regaining the ridge after a short time & following this for the rest of the way, except for some interesting sidles where it avoids some gnarly peaks.

The weather had been holding off nicely for us, the peaks north of the Drunken Sailors were covered in cloud & the valleys to the west of us were cloud filled but it broke up against our ridgeline & the valleys to the east of us were clear with only high cloud above & until now there had been very little wind either, this was to slowly worsen though now as the day progressed.

As we turned right to follow the Douglas Range the cloud was pushing hard up against the ridgeline from the west & kept threatening to overrun us as well.

The tops travel along the Douglas Range is delightful, wonderful tramping country, there are a couple of big sidles, particularly across the shingle face of Kakapo Peak, but the travel is great all the way along here.

Eventually you drop back into the bush in a saddle below Kakapo Peak & after a steepish climb back up, just as you are leaving the bush again, the track takes a sharp left hand turn & drops down a steep gully before sidling again for some time as you follow the face below Waingaro Peak to where you reach the ridgeline again where a poled route leads you down to Fenella Hut

We were supposed to have camped up here at some tarns just south of this turn off but the last half an hour or so the weather had closed right in until it was now starting to rain, this got heavier & the wind picked up as we dropped down to Fenella Hut & we were glad to get down off the tops to the forest below.  Fenella Hut was rather full so we pitched the tents in the rain & ate our dinner on the deck of the hut before retiring for the night

Monday dawned fine so we packed up and enjoyed the walk out to the road end; this is a beautiful valley & a really nice way to end, or start, a trip. Asides from the natural attractions of the valley itself, there is the old Cobb Hut, followed by the Tent Camp & then the derelict Chaffey Hut.

As we approached the road end wasps became very prevalent again, like parts of Nelson Lakes, you could hear a permanent buzzing noise from the forest around you always a little disarming

A great trip, the weather was kind; it rained twice overnight but was mostly clear during the day & we got the all important views along the Adelaide Tarn to Lonely Lake section that ensured the trip was a success