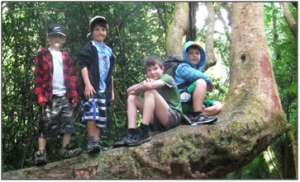 Wow, what a glorious weekend! The weather gods were extra kind to the young trampers.
This was the writer’s first tramp in … let’s say her son is nearly 17 and leave it at that. Her external frame pack was the focus much discussion but hey: isn’t retro in? I’m sure mustard coloured, swing jackets with scoop necklines are fashionable again?

The designated rendezvous was on Saturday, 10:00 in the Catchpool Valley car park, one of the many entry points to the Rimutaka Forest Park, and we were promptly on our way.  Almost immediately civilisation was a vague memory… Our intrepid young trampers, Tom, Matt, Tim and Toby, in consecutive years 6 through 9, were very enthusiastic and ranged happily from front to back. 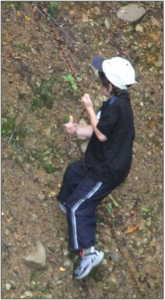 Morning tea was taken at the aptly named “Midway Bridge” where the boys practised their climbing skills. There is a well travelled path down to the stream way, way below, however the opposite bank of scree was a different proposition. But never despair: Matt and Tim’s dad was prepared with a climbing rope, and without further ado, it was unfurled and up the boys reverse-abseiled.

Toby’s dad decided to investigate the rumour of a short cut to the Orongorongo Valley so leaving the rest of the party to continue on the main path, he, the writer and Tim set off exploring past one of the many private huts in the park (anonymous after some plonker removed the identifying plaque; why?) and  along a rough, steepish track winding and scrambling down the ridge. Tim was very accomplished at sorting out the way to go, and we soon stumbled out onto the river valley. Unlike most “short” cuts, this one really did cut a good loop off the main route, though was it shorter in time? Debatable: the main group was very quickly upon us. 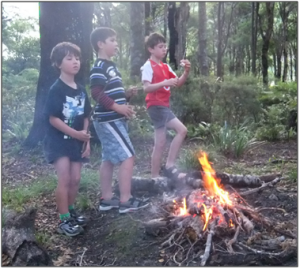 Regrouped, it was a very pleasant stroll to Paua hut and didn’t we make great progress. Cuppa tea anyone?

Exhausted by our strenuous morning, the afternoon was free for unstructured activities: some of us slept, others read, dam construction was attempted, and explorations undertaken.

A day’s tramping will pique the most fussy appetite: the writer has memories of delicious, one-billy “stews” of T.V.P. – is this backpackers’ staple still available? “bacon” was especially flavoursome, and Surprise mixed veges, thickened with potato flakes, the latter ground to powder after a couple of days at the bottom of a pack. Cabin bread and honey was a gourmet dessert, not to be confused with the honey, cheese and cabin bread had for lunch.

The modern tramper is accustomed to far better fare: our meal would have graced any dinner table. Dips with capsicum strips and carrot sticks to start was followed by a delicious main of pasta shapes, salami, broccoli and pesto (the lack of cheese was not noticed), then there was shortbread for afters. Yum!

A marshmallow roast is mandatory on a family tramp, and this weekend was no exception. Tim and Matt’s dad did a great job of getting the fire going and in no time nuggets of goey, sugary deliciousness were being scoffed; Toby won the “who can thread the most sweeties on one stick”, and the consensus was that the white marshmallows are best.

If you go to bed with the birds, it is axiomatic that you are also up with them. Left overs make a great breakfast and after chores were completed, it was back on the trail.

Those who went the long way were keen to explore the Alternative Route, and having made note of landmarks (truly, we didn’t use the GPS reading) we easily located the start of the track, and once again, Tim led from the front.

We had the obligatory break at Midway Bridge to encourage the boys’ climbing skills and this time little Tom conquered his fears and bravely completed the reverse-abseil. Well done Tom.

And so we arrived back at the car park, earlier than expected. Big commendations to all the boys: route finder Tim, entertainer Toby, intrepid Matt and brave Tom. You are all awesome.

Thanks to Angela for a well organised, thoroughly enjoyable tramp. We especially appreciated the word you had with Tawhiri (god of wind and storms): I don’t know what you did to convince him to stay away but it worked!

Apologies for inaccuracies that may have slipped in and any unintentional omissions: call it literary licence.