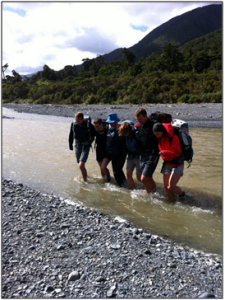 With nine punters signing up rather early we were confident it would turn out to be a good weekend. And indeed, it was a weekend with a good atmosphere, made more so by the Paua Hut rat having been caught earlier this year. The rain during the days prior to the weekend meant that the Orongorongo river was a bit up, which added to the fun of trying different techniques of river crossing.

We set out from Catchpool at 10 am after we had weighed everyone’s pack.  The average pack weighed about 13-14 kg; well done! Mika’s pack was good for an embarrassing (or impressive?) 20.8 kg, but that might have had to do with the fact that Hans’ pack only appeared to be 8 kg.

Since I won the “lightest backpack “contest, my reward was the honour of having to unpack it all in front of the whole group, probably to prove that I hadn’t left half of my gear at home (fortunately, I hadn’t). To the apparent disappointment of some, there wasn’t any magic trick to it either. The main trick really is to just think hard about what you will really need for the trip; as Tony said “a heavy backpack is full of light things”. 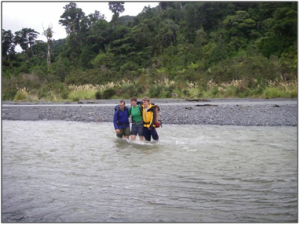 You can certainly save a lot of weight on the heavier items, such as backpack, sleeping bag, mat and tent. Lightweight gear is usually a bit pricier but not by much, as long as you avoid the supposedly lightweight stuff from the main manufacturers. It’s usually better to try more specialised brand which trade online. For the rest, I just try to take only what I am sure I will need, plus whatever might be necessary for safety (dry clothes, first aid kit). There is a whole lot of information and tips on the internet about going lightweight, including some which give advice relevant to New Zealand conditions. Some of these guys manage to go on overnight trips with about 4kg, including food! That is clearly an extreme case but still, they have good advice which helped me to shave off a few kg from my backpack. 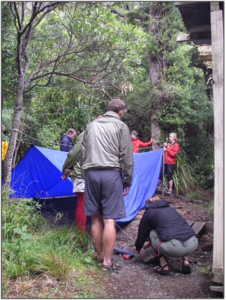 Later during the weekend we found a moment to discuss the contents of several packs and it was good to realise that we all were well prepared.  If, however, we had discovered that someone had forgotten an essential item such as a water-bottle, we learned that a watertight bag would suffice in its place.  The spectre of learning to cross rivers had been hanging over us since we all signed onto the course, and for many of us it was probably one of the main reasons we were there, but then, after lunch, we were suddenly presented with the prospect of actually launching ourselves into a cold, brown and not un-fast flowing river, and we all got a bit more of an idea of the need to have these sorts of skills when tramping in the NZ wilderness. Coming from Europe I’d always had the mantra drilled into me that you avoided getting your boots wet at all costs (even taking them off when crossing rivers and going bare-foot if needed) and so it was both weird and liberating at the same time to feel the water seeping in over the tops of my boots.

It was great to get the advice and experience of our group leaders Mika, Hans, Tony and Marie and so we spent a good little while trying out different river crossing point: trying by ourselves, with sticks, in groups of two, three, four, until we all felt confident, and that little bit more knowledgeable (and damp). The groups of children merrily hurling themselves across the river probably helped our bravado a bit mind you…!

I think we also all realised though (and again, this applies for the whole weekend) that you can’t beat experience and practice, and that although we all felt a bit more aware of the considerations you had to make before embarking (or not embarking as the case may be) on a river crossing, we’d just have to get on out there and get stuck in.

With a bit of hesitation as where it came to find our way and where to cross the river again we arrived at Paua Hut on the true left of the Orongorongo river around 2.30 pm. Marie and Tony pitched in their tents, we had a go at putting up the large and small fly, and Marie showed us how a mountain radio worked.

T’was a dark and stormy night….. Pitch black in fact and gale force northerlies were blowing. This did not matter, however, as by this time we were all warm and well fed in Paua Hut. We had learned a lot that day from our leaders. Their attitude and enthusiasm for sharing their knowledge and experience was fantastic and really made the weekend for me. I particularly enjoyed practising the river crossings with Tony and Penny. It was appropriate that one of our final lessons of the day was a fire lighting lesson with Tony as this resulted in the hut being warm through the night. So much so in fact that I was warned it would be pretty warm up on the top bunks. Due to this sage advice and the fact I knew I would have to venture out in the night (slight bout of paranoia on this foray) I opted for a mattress on the floor. I had a very comfortable night probably partly due to the fact that rats were not mentioned until the next morning and I did not see the sign on the wall about them until then! Ah, all these things to learn and consider, but that was why I was there. The next day would enlighten me more when the mysteries of that quintessential ‘boys own’ device, the compass, were revealed to me. Along with new skills that we learned, the big take home message for me was around being more aware of the situation and surroundings.

Tony predicted more rain to come on Sunday so we headed off in a timely fashion. We chose to go up Brown’s track to experience the different terrain and conditions. It was muddy, steep and slippery, garnished with a gusty wind coming up the hill from the river. How easy did we find the main track afterwards, and the rain? We missed it.