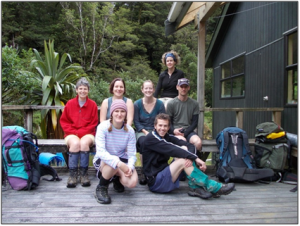 Out tramping again with WTMC for my second weekend in a row, we met at the station on a sunny Saturday morning for the 2.5 hour drive up to Mangahao Dam road end. The trip along the gravel road to the Upper Mangahao Dam is a long, bumpy ride in, taking about 50 minutes.

We left the van just after 10am. Penny and I were the newbies with Jo having done a number of tramps with the club on and off over a couple years. I was the only person who had done the tramp to the hut before so it gave everyone else the opportunity to bag another hut. I was a little nervous about the track because I remembered steep river terraces from my last trip there, when I had tramped to the hut at night. Luckily the track was better than I remembered and obviously tramping in daylight made a big difference!

We stopped for lunch just after the second bridge where there were some DOC contractors working on putting in the foundations for a new bridge that is to replace the existing one. Ian’s GPS came in pretty handy along the way as it gave us pretty accurate readings of where we were. At Harris Creek Bridge we stopped for another break where Margaret entertained us with her adventures above bush line in the Tararuas: bagging Maungahuka hut (not to mention the 15 metre steel ladder!) and being stuck there for a day due to bad weather and her continued battle with the weather across Bridge Peaks to Field Hut.

We got to the hut at 4:15pm, easily within Ian’s estimated arrival time of 5pm, and found we had it all to ourselves. Unfortunately they had replaced the hut log book earlier this year so I couldn’t go back and read my entry from when I had done the tramp in December 2008.

Megan was keen for a swim at the hut which I considered brave – I thought the river would be freezing since it was about 5pm and it was the Tararuas. But a few of us ended up going for a swim and found it really refreshing.

The communal meal of Asian Noodle stir fry was delicious – thanks to Jo, Karl and Ian for cooking. The meals I’ve had on the two tramps I’ve done so far have been really impressive; I’ve now got the recipe book downloaded for meals ideas while I’m at home! Margaret had us all laughing over how she had picked the chicken up from New World in that morning and had just got her knife out to chop it up into pieces on a table outside the supermarket. Consumers who were braving early morning shopping probably thought it was a new street stall starting up!

After dinner, the cards came out and we played Presidents and Loser;– Jo’s reign as President went pretty much undefeated and we eventually surrendered to turn in for the night.

On a sunny Sunday morning we left the hut at about 9am. We decided to follow the river until the junction where the inland route joined back up with the track. The river was no deeper than shorts height so it was a fun way of avoiding walking the same track twice. We stopped for an early lunch not long after Harris Creek where there was picnic table (accompanied by a pair of slippers!?) in a little clearing just off the track.

Once we got to the bridge where the DOC contractors were working, we decided to follow the river out to the road-end instead of the track. Getting down from the track onto the river bed was a bit of clamber. Unfortunately, Jo was halfway down when she heard me putting my foot in my mouth and jokingly muttering “this is a bit of steep drop.”  This resulted in us both in fits of laughter at the perfect timing of the comment and everyone else regarding us with confusion over what the joke was.

Just as we got down onto the riverbed, a helicopter circled overhead and then landed on the riverbed in front of us to pick up some of the DOC contractors’ gear. It was nice to see a helicopter in the Tararuas for a reason other than SAR.

From there, it was an easy hour walk down the river to the road-end, which was about half the time it would have taken by the track.

Thanks to Megan for organising the trip and driving. It was a really fun weekend.