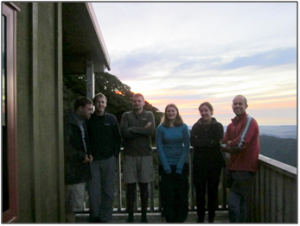 The tramp started really well for me: I hadn’t been tramping in a number of years but thought I had all my gear together in one place since I had recently done a trip to cycle and camp the Otago Rail trail.  So, I decided that I could leave packing my bag until 11pm on Friday evening only to realise I couldn’t locate my waterproof jacket!! After this horrified realisation, I remembered I had left it at work. I managed to arrive early at the station but completely out of breath telling Steve I had nearly forgotten the most important item. The gear list on the club website is great for doing a last-minute check to see that you have everything. It’s very easy to overlook the most obvious items even if you have been tramping a lot.

There were 8 of us in total, including our trip leader Steve, who met at the station at 8am on a sunny Saturday morning. We had all done some tramping before but were newbies to WTMC. The trip to the road end went pretty quickly, with Steve expertly negotiating the WTMC van across the narrow bridge to Poads Road end. The tramp was originally planned for North Ohau Biv but due to numbers Steve thought South Ohau Hut would be a better idea; a fairly new hut that didn’t even exist on my 2006 map of the Tararuas. However, when we checked the log book at the road end, there were a group of VUWTC members, who had stated that their intention was to tramp to South Ohau Hut so Steve suggested heading to Waiopehu Hut, an idea that was greeted with much enthusiasm, (despite been a bit longer and steeper), as it would mean we could do a loop rather than returning on the same track. Juliet and Adam had both done the tramp to the hut before so unfortunately they couldn’t bag a new hut. 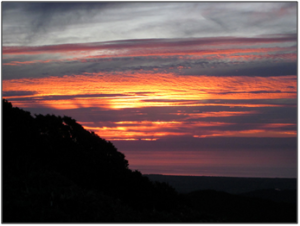 Not long after Bush Corner, Steve announced he could see the hut on the hill side. “He’s not having us on, is he?” Matt said to me. Apparently not, because we came across the hut about 30 minutes later.

We got to the hut about 3pm where some of the group decided to have a nap or relax in the sun. Geoffrey and I were still feeling really energetic so we walked up to Waiopehu Peak and Twin Memorial Crosses to take advantage of the unusually good weather. I knew that getting perfect visibility above bush line in the Tararuas is a bit of a gamble so decided to make the most of it. While walking up to the peak, I met another WTMC member, who was doing a day walk. We got talking and I mentioned I was doing a tramp with the WTMC. “The Tongue and Meats Club,” he said. To which I responded with confusion that it was the WTMC, not the “Tongue and Meats” Club – by this stage I was wondering with increasing bewilderment what such a club was!!! He then explained me to me that this was what the club was known as amongst club members since the club once shared the same acronym as a Wellington meats company.

The view from Waiopehu peak was amazing with some picturesque cloud formation. I did find it strange though that when I sat on the peak next to the trig I could still hear the distant sound of cars. We all found it a bit unusual that you could hear the sounds of civilisation from the hut – it’s probably the only hut in the Tararuas to do so. In the evening we were treated to a beautiful sunset and could see the lights of Levin and Palmerston North. The hut log book was pretty entertaining with people recording main activities on their trip to the hut as ranging from eating right through to scuba diving and sprinting away from giant bears.

Sunday dawned with light drizzle and mist; a typical Tararua day, especially when above bush-line. We left the hut at about 8:30am and went up to Waiopehu peak and then continued the descent along muddy Gable End Ridge. The mist did clear a bit allowing a little bit of a view but not as good as the day before.

One of the topics of conversation along the way was of tramping gear amd the merits of various packs: NZ made packs (MacPac) vs Off-shore manufactured packs. Somehow Matt brought up that he had some tramping socks since 1985. “I hadn’t even been born then!” I piped up. Those socks will be famous one day, surely……

After we had descended the ridge, the track was fairly flat and we all zoomed along back to the van.

Everyone had a great time. Thanks to Steve for driving and organising the trip.