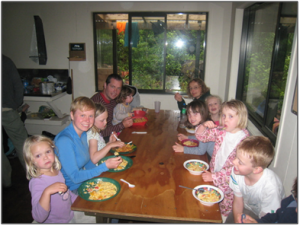 On the weekend of March 10/11th, I went for my first overnight tramp with Dad. We were in a large party of 5 families. The youngest was only 6 months old!

We set off on Saturday from Holdsworth carpark for Atiwhakatu hut – a distance of 5 kilometres. It was a beautiful sunny day, but the trees were good to keep us cool. Most of the time we could hear the Atiwhakatu Stream running near the track. Dad had all the heavy things in his pack, and my brother Hamish had a pack with two sleeping bags, lunch and a big billy for cooking inside it. I didn’t have a bag, because it was my first big tramp.

We stopped a lot to eat; I often shared lollies, snakes and chocolate with the other kids on the tramp. After lunch we came to a river where the swing bridge had been washed away by a lot of rocks. I thought it would be good to take my boots off to wash my feet in the river.

It took about 5 hours to get to the hut; DOC reckons it should only take 3! Atiwhakatu is a modern hut. You need to bring your own candles, food, and cooking equipment. There were lots of other people there – Dad thinks about 50 in total. We had a shared dinner with the people in our group; most people had second helpings!

I slept really well, Dad helped me get to sleep by giving a cuddle in the bunk. He even carried me barefoot to the toilet in the middle of the night (because he couldn’t find his sandals in the dark).  The toilet is really, really, smelly – but we won’t tell Mum that!

The morning was busy, getting ready for the return. Dad was a little slow getting packed, so Hamish and I started walking with Beth and Clare, two other Mums in the group. Dad soon caught us up though. We stopped for lunch on the river, and had great fun throwing rocks, eating and generally relaxing.

Back on the track I soon started to tell Dad I was tired. When he finally listened to me, he picked me up in his arms to carry me. We both got a big fright soon after, when Dad tripped and hurt himself. Some other trampers carried his pack, and Dad walked out very slowly to the car park. We learned later that he had broken two bones in his foot.

I was pretty tired, but had really impressed Dad with the great walking that I did. Now we are busy planning our next tramp.