So decision made, we turned and  headed North along Sawtooth Ridge on Sunday morning.

It wasn’t supposed to work out this way, but as usual Huey had a hand in the way things turned out.

A late flurry of emails saw us heading for the Western side of the range, instead of the original Eastern side, destination: Rangiwahia Hut. 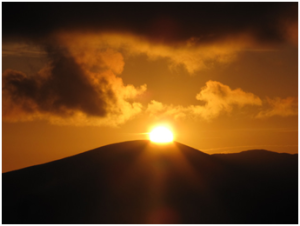 Leaving home around lunchtime, I arrived 1st, but Sharron and Mike left work early as well so were only about an hour behind me.

Excellent we can all get an early night to prepare for the long day ahead.

Our plan was to head for Pourangaki Hut via Te Hekenga, Sawtooth and  the ridgeline towards Iron Peg, dropping down the track off Pt 1632 and  back up to the hut. That left a very manageable 5-6 hours on the Sunday, to get back out to the car. 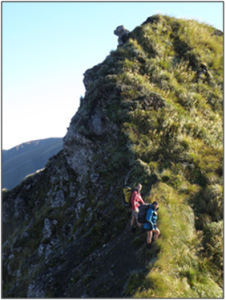 We awoke though on Saturday morning surrounded by mist and  clag. The outlook for today was unfortunately somewhat gloomy, with occasional showers and a brief southerly change forecast.

We got away at 7am anyway and by the time we started to drop into the Te Hekenga saddle, the weather lifted somewhat allowing spirits to rise and teasing us into thinking we would be ok.

We arrived at Te Hekenga around 11am and with reasonable visibility, we had the advantage of choosing a route around the gnarly bit here. Last time I was here we had driving snow, no visibility and a few inches of snow on the ground; then we had headed down the spur to the south until we could drop down a scree and sidle under the rocky ribs to eventually regain the ridge to Taumataomekura. 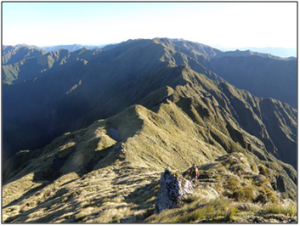 This worked well but was a longer option.  With good weather this weekend we picked a much quicker route: If you head East on the South side of the pinnacle ahead, about the same height as you reach the top of the ridge, there is a trail that follows around a short distance until you come to a rock climb, directly below you there is a gully that drops you down to where you can sidle under this part and  back up onto the ridge again. We couldn’t access this gully directly at the top, but a short backtrack to the previous gully allowed us to drop down a short distance and then cut over into the original choice without any difficulty.

As we reached Taumataomekura we dropped to the Leeward side of the ridge for a snack and  to consider our options. The cloud was starting to roll in again and after much deliberation we decided nothing except that most of us would rather not walk Sawtooth Ridge in the rain.

Continuing on to Tiraha, the weather suddenly closed in completely and the rain started to bounce when it hit the ground, it had turned to sleet or hail. Either way after some debate we decided to drop to Howletts, thinking we would probably be returning the same way the following day to get back to the car.

Descending the spur, the rain settled in again, reaffirming our decision to bail, it was cold wet and  unpleasant up here today.

Arriving at Howletts Hut around 1:30pm, we read, dozed and  filled in the day until it was time for dinner, then Mike got the coal fire going and we finally managed to dry out our remaining wet gear.

Sometime during the afternoon / evening we started muttering about still having a crack at Sawtooth Ridge if the weather was fine tomorrow.  Either along it and back, or even to complete the trip as planned.  We calculated this would be about a 12 hour day, so would need to be off early again the next morning if we were to have any chance of completing this; funnily enough sitting at home looking over the maps, this wasn’t an option I had considered.

We set the alarm for 6am and on arising discovered a brilliantly clear morning and suddenly Sawtooth Ridge was firmly back on our radar again.

Arriving at the top of Tiraha around 8am it was decided. We couldn’t pass up the chance to wander along Sawtooth Ridge in the sunshine and if we were going to Ohuinga, we might as well continue on all the way and finish off the trip.

There was a cool breeze on the tops so it was on with the jackets and gloves, but the sun was shining and the views were fantastic.

Sawtooth  Ridge is exposed and  shouldn’t be taken lightly in bad weather, but travel is actually pretty good with many sidles under or around the various gnarly bits, it definitely looks worse than it is.

It was fantastic to finally get along here in good weather, my few previous attempts had always been dogged by bad weather, but today was just brilliant.

By the time we had reached Ohuinga, cloud was starting to build up to the South and  North of us but we remained in the sunshine, with a window of fine weather that was to remain with us for most of the day.

The travel north of here to the Pourangaki Hut turnoff is, at times, more challenging territory than the ridgeline we had just traversed, easy enough in good weather, but the pinnacles just south of the turnoff to the hut are slightly more difficult than anything on Sawtooth Ridge.

Next it was down to the river and up to the hut for a late lunch, or actually we ate on the ridgeline above the hut rather than dropping down to it, energy conservation seemed more important than seeing the inside of the hut. Mike went down and filled in the log book and  topped up our water bladders, but we were happy just resting.

Funnily enough my photo’s seemed to dry up over this period as well.

The climb up to the top still passed quickly enough and once there, Sharron sent off a few texts to explain we would be a little late out of the hills, it was now around 3:30pm and  we still had a bit of ground to cover yet.

Back along to Maungamahue again, where the weather began to get overcast and  the temperature started dropping. Soon enough though we were standing by the sign pointing to Rangi Hut, a couple of photos here, (we got none on the Saturday morning as it was too misty), then off down to the hut.

A quick re-hydrate there and then we were off again, finally reaching the cars just after 7pm, exactly as predicted 12 hours ago.

No rest here though, after a quick change of clothes, we hit the road, Mike and Sharron off to Wellington, while I had to head back to Tauranga.

All in all this was a very memorable weekend in the hills.

Many thanks to; Mike for making it happen, Sharron for the Jellybeans and  Huey for the fine Sunday.