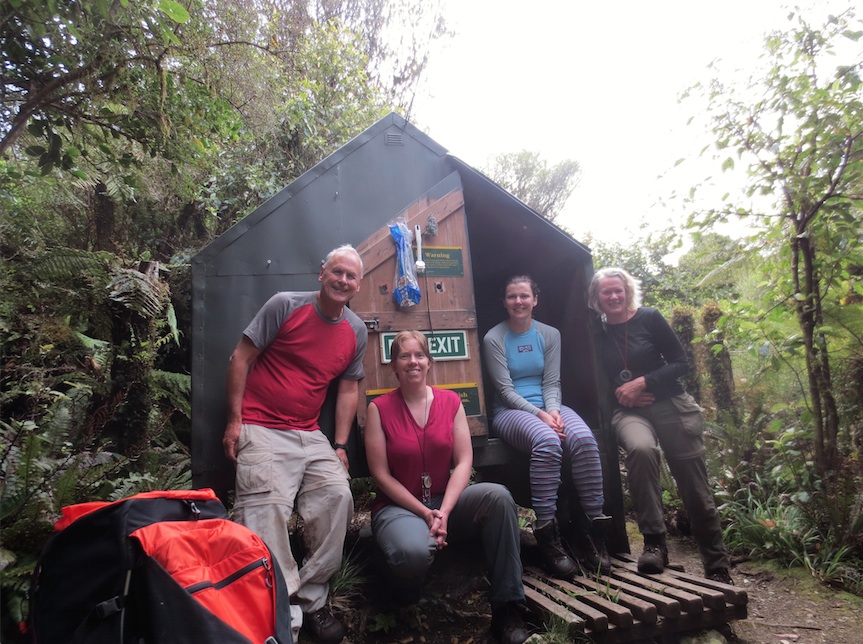 North Mangahao Bivvy’s claim to fame is being the most northern official hut in Tararua Forest Park. As a part-time hut bagger, I needed to tick this one off the list. However, rather than coming from the eastern side which requires permission to cross private land, I decided to challenge myself navigationally (and in other ways!) by coming from the western side and bush bashing east to the biv.

On this ambitious quest, I borrowed Mark’s GPS (thanks Mark – it was invaluable!) and relied on the instructions from Madpom’s blog.

Paul, Sharron and Meredith foolishly joined me (and I am so glad they did!) We met at 8am at the Railway Station and Paul kindly offered the use of his car for the two hour drive up to Tokomaru and then down a long, winding gravel road to the point where I had been instructed by a colleague to park the car. This was at a fork in the road with a sign marking the Te Araroa Trail.

It was then a five minute jaunt down the gravel road to a locked gate. Luckily there is a stile over the fence on the left hand side, which gets you round the locked gate and you can cross the bridge.

From here it was a good hour and a half, possibly two, of following forestry tracks. Here is my go at summarizing our route (which was the most direct according to the GPS):

At the bushy bit, if you keep following the forestry road around, it will turn back on itself (and from there we don’t know where it goes!) This is not what you want to do. Instead, we got off the track and pushed briefly up through the bush following a wheel rut/grass trail. We followed the just discernable foot trail in a southerly direction, mostly through grass, with the occasional bush or tree to push past, until it became a wider, stony looking path just before the back boundary of the forestry. If you are using the GPS, it will indicate that you are following a forestry track, even though it doesn’t look like it in real life!

Where the forestry track forms a hairpin turn on the map you will find a wire fence to hop over. From there, it is about a 300 meter climb to point 686 on the map, through some rather dense bush and scrub. There is a thin track that has been cut through the bush to follow, and it is hard to go wrong navigationally, as the bush is so dense you can’t really go anywhere else! You may see the occasional bit of pink tape. Point 686 is where you will get your only views on the trip. Yay!

From point 686 continue for 500 meters across the ridge, again following the thin cut track through the scrub. All of a sudden it will take a right hand turn and start heading south down the hill. At exactly this point on our trip, a man (I called him Mr Tararua, as he looked like he lived there permanently!) popped up out of the bush. He informed us that we were half an hour away from Punga Hut, one of the many “unofficial” huts in the Tararua, and to follow the track marked with pink ribbon down the hill. He also told us that he was responsible for the blue tape between Punga and Mangahao – he had “cut” that track many years ago. He left us, following another of his tracks, also marked with pink tape, branching off and continuing along the ridge. This was his possum trapping line. I saw the hammer in his belt and winced – the possums didn’t stand a chance!

After descending to the creek and crossing it, Punga Hut appeared. It is an interesting hut, built some 50 or more years ago entirely out of Punga. Nowadays the roof has been replaced with some plastic/aluminium, making it a very tidy and water tight little hut. The bunks were just sacks, but there was a bench to sit on, and a woodshed stocked with wood at the entrance. Water came from the creek we had crossed to get there. We had our lunch amongst a few spits of rain while Sharron read out the entries from the log book. It didn’t sound good – stories of horrendous bush-bashing for 5 plus hours and not finding the biv! As she read each entry, it felt more and more like the scene from Lord of the Rings where the fellowship is stuck in Balin’s tomb reading the last entries from the book before the goblins and orcs come. We cannot get out, we cannot get out…they are coming!

However it was too early to admit defeat, so we reshouldered our packs, walked behind the hut, and stepped off the track into the wilderness.

Madpom’s blog offers two routes – neither of which sounded appealing. One warned of the dangers of impassable scrub on the tops, the other the difficulties of navigating a large waterfall on the Miro river. We opted for an in-between route, sidling between 500 and 600 meters in a south-easterly direction, the only waypoints being the two side creeks marked on the map. We did not find the “super highway” whispered of (or fantasised about!) on some of the blogs. Instead, with Paul bravely route-finding, and Sharron, Meredith and I following with GPS and compasses, we pushed, slid, scrambled and pulled ourselves up and over spurs, through small gulleys, and sidled along edges for a good three hours. When we couldn’t find a way through we had to go up (or down) to a more passable point. After much sweating, and picking up more than a few leaves, twigs and clods of dirt, we popped out onto the tops about 100 meters from the biv. At this point I told the others to follow me, as I could follow the GPS to the biv. With some (understandable) caution, they did, and Sharron stumbled on it at the same time the GPS declared we had arrived!

It was a great relief to arrive at the biv, just on 5pm. After congratulating ourselves on being such proficient navigators, we set about finding a water source (a meager trickle from a creek just below the biv), and setting up tents. I was delighted to set up my tent in the bush, as it had not yet had a proper bush outing. Sharron (with some unhelpful instructions from wanna-be chefs!) cooked us a very tasty meal of Moroccan couscous, and we poured over the entries in the “log book”, noting at least two groups from WTMC had been there. We also noted the numerous entries from Wayne and Colin, who seem to be the unofficial caretakers of the hut. They have done a marvelous job of maintaining the biv – it is a very tidy wee biv. I also thought it was very cute to see that (possibly Wayne) had bought his 8 year old granddaughter Isabella in with Colin (the entry stated she had come with “pop and Colin”) and she had signed the book herself. I thought to myself if an 8 year old can walk herself in here, I must walk myself out tomorrow without any complaints! We climbed into our sleeping bags just as the rain set in.

The next morning was overcast but with no rain, and we breakfasted and packed up ready to leave by 7.45am. I decided I needed to practice my route-finding, so I led the group away from our safe little camp and back into bush-bashing. Just below the biv we stumbled on a reasonable track marked with many different coloured ribbons, but mainly blue. This was easy-going compared to yesterday’s route, so we followed it for a good 100 meters down hill. However, we thought it was leading us straight down to the river, which is where we didn’t want to go, so we struck off the “track” just above the 500 meter contour line. Sunday was an almost exact repeat of the day before, the travel equally as bad at a slightly lower altitude. Once or twice we picked up a ribbon trail, but it soon disappeared, with either the ribbons having rotted away, or the trail-maker having got lost themselves! Eventually the GPS told us we had passed our first creek, and then the second, and the travel became slightly easier from there. Close to Punga Hut we picked up another ribbon trail, this one leading us to the other side of the hut. The return trip took us about 3 hours and 10 minutes.

From Punga Hut, I thought the going would be easy, so pocketed the GPS and got ready to follow a well-marked trail. However, 5 minutes in and we were lost again! It took some scrambling around between all of us to find the trail again, and we were much more vigilant from that point on. Alas on the tops, just past point 686, the GPS played a trick on me, pinpointing our location way off where we thought we were. I was deeply confused by this, and made the group march back up to point 686, and back down again, only to realize that we had been on the right track the whole time and just hadn’t gone far enough to the fence line! Paul suggested that due to the weak signals the GPS had been getting it triangulated our position incorrectly. I preferred my explanation which was that the GPS didn’t like the fact he had been pocketed, after being held so closely for the past 3 hours, so he was making beeping noises and doing strange things for attention!

Eventually back over the fence and following our grass trail, then the forestry tracks out, we got to the car just as the rain was setting in proper. Paul did a great job of getting us to Shannon just before the café closed, so we could revive ourselves with coffee and muffins. All in all, another good trip with lots of GPS related lessons learned!