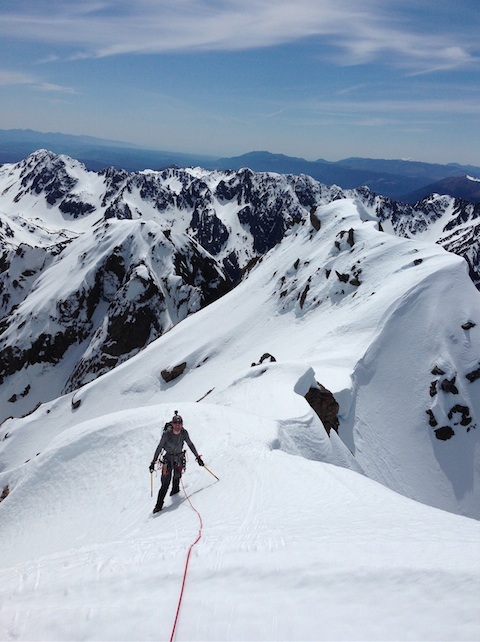 Who names a mountain “Hopeless”? By all accounts, “an early survey party with a poor attitude”! Three days before our ferry left Wellington, I carried out my standard ritual of emailing all the trip plans to my Dad. He usually replies with “Thanks Son, be safe out there” or encouraging words to that effect. This time, however, he phoned me. “Nick why do you think this trip plan is hopeless?!” For a second he thought I’d already decided my plan was rubbish and that we had no chance…

Which made this whole trip all the more enticing. This is a technical but achievable peak to climb hence why it’s a popular choice for post AIC (Alpine Instruction Courses – the traditional next step after Snowcraft). We opted to attempt it from the South, via the grade 3 couloir route, and down the SW ridge. This was both for the fact that it’s said to be a very fun route, and that we wanted as much time in the shade as possible to increase our chances of firmer snow conditions.

We again opted for the water taxi across Lake Rotoiti, just like we did with Mt Travers and Kehu Peak earlier this year. Given the walk to the hut is almost 20km even from Coldwater Hut, we were not keen to use up more time and energy doing the extra 3 hours or so from the Mt Robert road end. Hamish and Lynne run a slick operation and you can charter a boat for around $100 each way.

The track to Cupola Hut takes you along a good chunk of the Travers Sabine circuit; this valley is far and away my favourite tramp. It’s an easy going trail which weaves deeper and deeper into the park, until you reach the well-deserved break spot at John Tait Hut. This hut sits precariously on the edge of a well-worn avalanche path, and it’s evident by the huge scar up the hillside above it. Shortly after the hut lies the turn off up the Cupola Creek valley, where the track gets progressively steeper and steeper until Mt Hopeless erupts into view directly ahead. The trail veers slightly off the marked one on the topos where it switches back multiple times before finally revealing the small and cosy white Cupola Hut perched on the edge of the hill. I instantly fell in love with it – a traditional small 8 bunk hut with fire, and views to kill for. In fact, it’s my new favourite hut based on location alone. Well worth the tramp there to soak in the panorama even if you don’t go any further up.

We set off on our summit bid the next morning at 0600, after another fantastic WTMC recipe and an even better night’s sleep. A mere 30 metre walk through the woods above the hut brings you to the tree line, and from there it’s a pretty well worn trail across the alpine tussock and rock. A couple of small stream crossings and you arrive at a very fun section of huge boulder hopping, before beginning the silent and steady climb up steepish scrub to around 1700m, where the snow started.

We were very happy to find the snow firm underfoot and the cramponing started off perfectly. For about 15mins! We arrived at the base of the couloir (a steep, narrow gully on a mountainside) at just after 0900, where we found a flat spot to steel ourselves for the technical climbing to begin. The couloir is deceptive – from the bottom it appears simple and inviting, but it’s always worth remembering that couloirs often steepen towards the top, and are a confined space which means that any weakness in the snow has only one way to go. There were a handful of sun-drenched cornices (overhanging snow usually found on ridge lines) which sat precariously above us but they never suggested any trouble as it was still very early in the day. We did however get our fair share of ice dusting which was pouring off from various angles and causing a bit of frustration when trying to enjoy the freedom of the climbing.

After about 45 mins of sustained climbing we arrived at the crux of the route where a small chute ascends up to the left at the head of the couloir. Gareth led the first running pitch up the steep chute, even managing to place an ice screw near the top (only to be burying snow stakes in soft snow just 30 metres later!)

At the top of this chute you emerge into the sunlight and onto easier ground, where the route meets the big snow basin on the Hopeless Creek route. From here I led us up towards the summit direct, resisting the temptation to traverse out further North and create a bigger detour. This meant one single section of about 4 metres of vertical rock which was really exciting. Getting over the rock face meant that with just one short pitch we could top out onto the summit ridge in one of the only places that didn’t have a huge cornice jutting out. Glimpsing the view as you pop your head over onto the ridge was breathtaking; the whole park reveals itself – both Lakes spread out North, the full Kaikoura Range sat behind you to the East, and the full summit ridge of Hopeless, with Cupola, Travers, Kehu Peak, Franklin, McKay and Paske, all fighting for prominence on the skyline to the South.

Because of the loose snow and huge cornices around us, we opted to stay on the rope and I brought us all over for a lunch stop at a standing belay on the summit at 1300. I can’t say I’ve ever enjoyed lunch from such a breathtaking spot.

Our descent was to be via the South West ridge, meaning a complete traverse of the summit ridge. This was followed by some straightforward down climbing as the slope descended steeper and steeper. After about an hour I reached the bluff which dominates the SW ridge skyline. The slope continues to steepen until you move into rocky terrain and it essentially drops off into a near vertical cliff. We knew to expect some abseils so were prepared with long slings. If you plan to descend this way, bring a second rope for the abseil. We were loathed to have to carry another rope for the whole trip, but were so glad we had it for those few hours!

From there the ropes came off as it was a simple scramble along the rest of the ridge. We very quickly found an inviting little snow chute which took us all the way back down into the basin we had started at earlier in the day, once again safely hidden away from the heat of the sun. Had the sun been on this snow we wouldn’t have descended this way, but it was in perfect condition to allow us to heel plunge all but the most steep sections of it. We had hoped to continue further along the ridge to a nice escape near pt 1989, however we couldn’t see the apparent ledges that could be used along the West side and from where we stood it looked quite full on. Given it was already 1700 we weren’t keen on spending another 2-3 hours traversing that way on a rope.

The walk back across the easier slopes to the hut didn’t take as long as I had anticipated. Yes we were tired, but the snow had started firming up again by the time we got there which made all the difference. I think perhaps the incentive of a warm hut spurred us all on. We arrived just after 1900, some 13 hours after setting off, to great celebration.

As tired as we were, the banter and laughs were at full volume all evening. We had the hut to ourselves and the view of route outside the windows of the hut was an incredible way to reflect on the day’s climbing. We had hoped to get back early enough to decamp down to John Tait Hut, but I’m glad we didn’t as Cupola Hut is a wonderful place and we savoured every minute of it.

The three of us were on the trail by 0800 the next morning, all smiles and no energy. We definitely faded in the last few km, and so arrived with just minutes to spare for our pre-booked boat pick up of 1400. Arriving back in St Arnaud was a shock to the system; the dock and surrounding beach was absolutely packed with activity, and the weather was easily in the low twenties. Anyone who has done a hard tramp or climb before will relate when I say that the “cotton cache” of clothing and the cafe food and flat white was what I imagine winning the lottery would feel like… and boy did we win the lottery that afternoon!

2 thoughts on “Hopelessly head over heels for Hopeless”