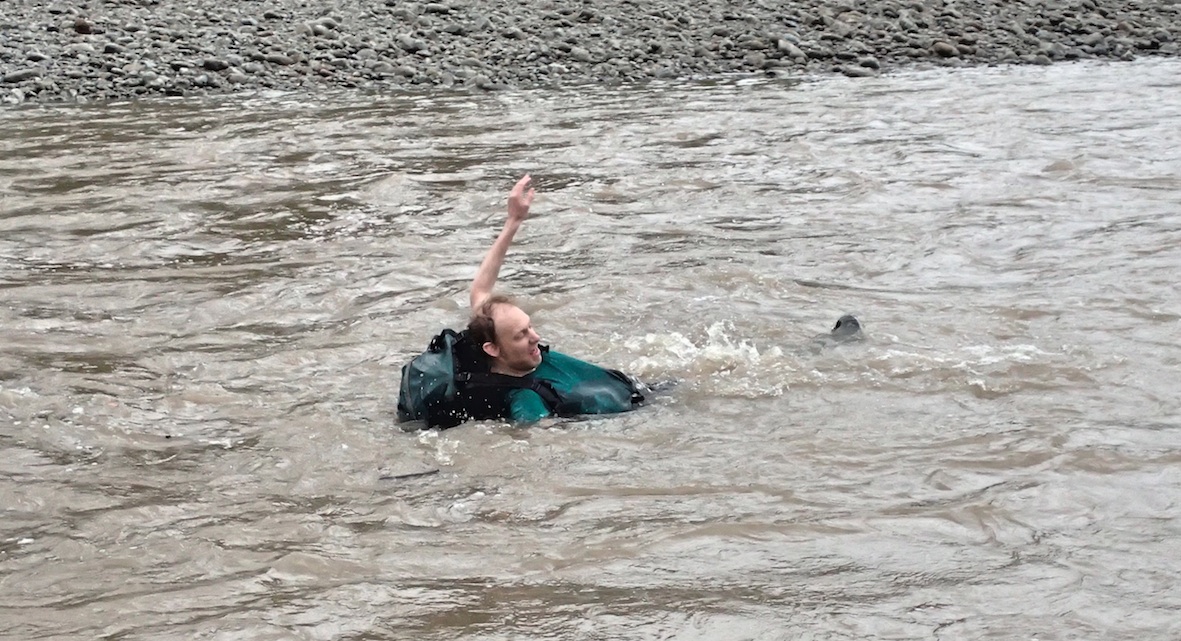 Noel started the course of with the question “Who has ever had to cross a river?”

The strong take-home message for the day was that river safety was mostly about the decisions made before entering any river, particularly whether to cross or not.

There were 16 course attendees including the club members. Many were walking the Te Araroa trail, others travellers or locals aware of the reputation of NZ’s rivers, a Kiwi fisherman wanting to always get home safely, and some just wanting to generally enhance their outdoor skills or confidence.

Most of the morning involved watching various videos interspersed with instructional information, insightful questions and discussion. Tips learnt included throwing a stick in the river and walking beside it to see how fast the river is; it’s safest to pack-float head first (and why, unless you have an external frame pack), and to plan your exit point well before you enter.

Someone asked ‘what if you don’t want to cross but everyone else in your group decides they are going to or want to?’. Noel’s response was ‘It’s better to be lonely but alive’.

The lure of the hut just on the other side of the river and get home-it-is fever was mentioned, along with a few recent river deaths to reinforce why this was called ‘River Safety’ not ‘River Crossing’.

If you do decide to cross, the mutual support technique was emphasised (depending on the conditions). This included how to link up, who goes where in the line (and why); how to prepare your clothes, pack, glasses and more. A lot of the information was guidance not rules – as various groups found out later when practising sometimes it depends on who you link up with.

If you must cross on your own, a large, solid stick may sometimes be better than your walking pole. Fortunately, we were told which rivers in the Tararua have a pile of such sticks on either side. When talking about why the stick had to be upstream, Dom used the useful analogy of when crossing the road you want to look to where your dangers are (just one of a number of reasons why).

For the practical part, the 16 attendees split into four groups to practice some of the crossing and floating techniques on dry land (indoors). The group I was helping walked around ‘strainers’ (the pile of poles on the floor) and big obstacles, dealt with currents (instructors pushing) and refined the caterpillar turn as the strong current (‘Dom’) spun them around. Each also got ‘swept off’ their feet, held by the group. Other groups were also practising linking up in different ways, entering, retreating, working their way around river obstacles (bags and other people), cliffs (instructors) and caterpillaring. Just before lunch everyone went on the floor on their backs to try pack-floating.

Dom and Noel then went off to re-check possible places to practice in real water. 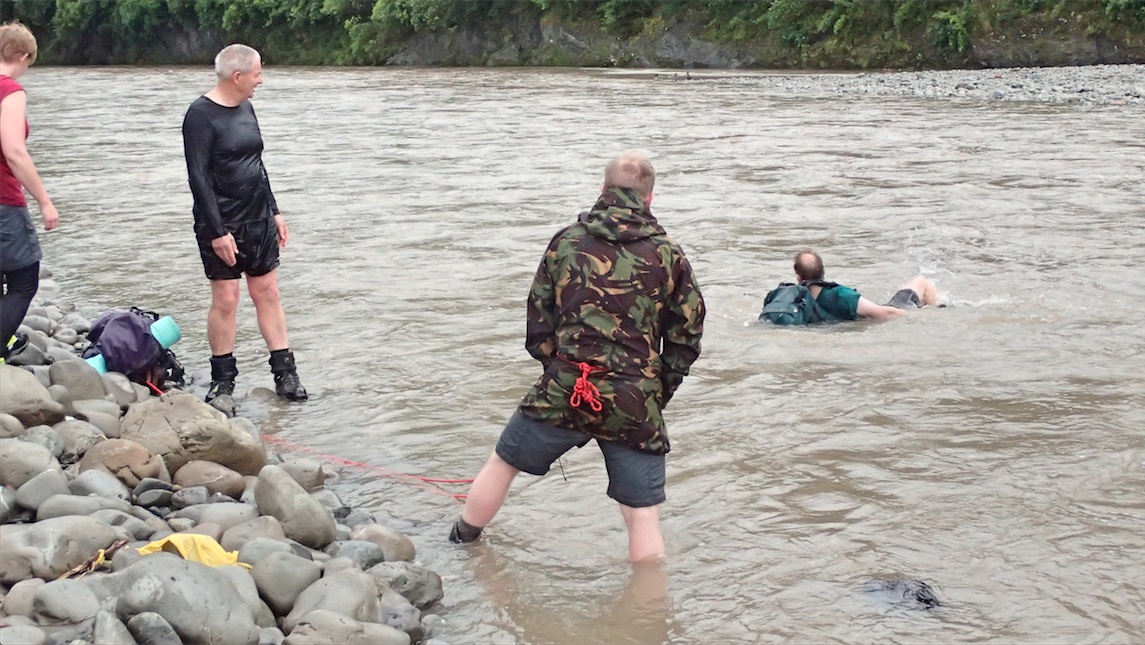 The day was perfect for a river safety course in that it had rained much of the week and more was forecast. Almost the moment we arrived at the Hutt River, a big storm came through with heavy rain and some thunder and lightning for effect. By the time we reached the river bank (most in raincoats, a few in wetsuits) concern about getting wet entering the river had long gone (with my phone and some photos of the day the only casualties of the deluge).

Noel, to test the river, started crossing on his own with just his stick (Lance), stopping when waist deep. We split into groups on the bank, now having to decide in a real situation ‘Would you cross this river?’ and ‘Why/why not?’.

In the end, all groups decided they wouldn’t cross. However, as an instructional course, everyone was still keen to get their feet (even more) wet. Most groups went a few metres into the river to try the mutual support technique in the river, retreating where the water was still relatively low. Matt’s group fell when in the water, practising and gaining useful experience (both in the river and on the bank) about when to stay linked and when to separate.

Most also tried walking part way in the river with just a stick (with about half falling over at some point), feeling the difference in stability on their own compared to when in a group.

Those who wanted to then had a chance to try pack-floating (with Dom launching them upstream). Meredith, Tony, Juan and Jamie all threw themselves in (Jamie keen enough to try it twice).

For those who wanted to try releasing from a stuck pack, Pete anchored himself further downstream, rope around his waist tied to Noel’s (by then about 40kg) pack. I had a go, not having tried pack release before, with Tony shortly locking himself into the challenge (see below).

After the final floats and releases, we were back at the cars, sun now shining and in dry clothes for the course debrief.

We’re hoping to do more training but need the numbers. If you’re interested in a future river safety course, or any other training, please post a comment or email .