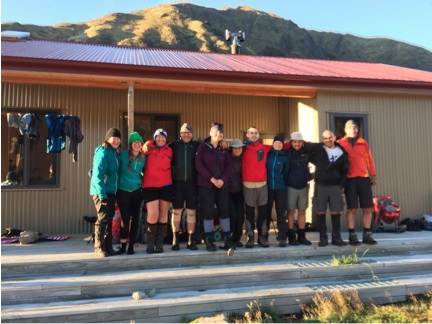 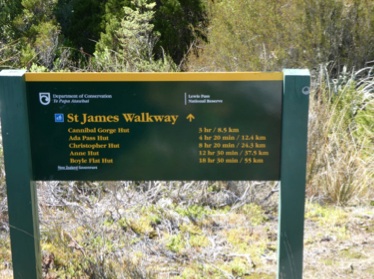 After leaving Wellington on Thursday afternoon and staying the night in a Picton Backpacker, all of us were itching to get on the road. Friday morning was an early start for us as we repacked our packs and threw them into the van, keen to get moving.

After what felt like an impossibly long drive in a cramped van, we finally arrived at the Boyle River Outdoor Education Centre to pick up the person who would take us to the start of the track and drive the van back to the end of it. By this stage it was around midday but as we were only going about 10k that day none of us were too worried. We passed Cannibal Gorge Hut and came out of the valley onto Ada Pass Hut, a cute little hut with the appearance of a cottage, next to the river. Once we got there we realised that none of us had enough bug spray for the sand flies which buzzed around our exposed skin, trying to drain us of all vital fluids.

The next morning it was an early start for us once again as we had over 23k’s to cover that day, passing Christopher Hut and staying at Anne Hut. We knew the weather forecast wasn’t exactly brilliant, therefore we knew that the sooner we got moving the sooner we might avoid some of the weather. What optimists we were! The weather didn’t start out too bad, but by the time we reached Christopher Hut for our lunch break we were all feeling like we had been on a washing machine spin cycle. We kept moving and eventually came to a wide valley which had the Anne river bubbling through it. Because of the rain it became extremely boggy. Many of us tried, and failed, to avoid the mud by jumping and skipping over the wide patches of it, often with some rather hilarious consequences for everyone who didn’t end up with mud on their face. After quite a while of driving rain the weather changed and we were instead blown around by strong winds, which I appreciated as this gave me the chance to dry my hair and clothes out a bit. My supposedly ‘waterproof’ jacket, which is admittedly pretty old, was completely shot by then. Bits of it were flaking out all over my leggings and I could only hope that I wouldn’t need it again for the rest of the trip. Time to buy a new one.

We eventually came to a suspension bridge if that is what you would call it. In the weather it felt like nothing more than a tangle of wires being thrown around in the wind several metres above a rocky river bed. Crossing it in the wind and rain, while wearing a heavy pack was nerve wracking, the bridge was swaying around and every step you took threatened to be the last. However, one at a time, with much apprehension, we made it across and after a few more K’s we came to Anne Hut.

The DOC sign outside Anne Hut has an extra helpful remark scratched onto it by a previous and obviously frustrated tramper; it says ‘Anne Hut “the most exposed hut in NZ”’ and that night it felt like this tramper might be right. When we arrived, there were already about 25 people there so there were no bunks left. I went outside and found sheltered spot to put up my tent under the eaves of the Hut. The weather was starting to deteriorate again and for those of us who were camping we lucky to have gotten the tents up when we did as it started to hail not long after.

Later that night I had an uninvited guest show up. At about 10pm I woke to a strange scratching sound in my tent to discover that a mouse had chewed through my tent and was rooting around in my pack for food. Now, I’m not squeamish about rodents, but I did not want one in my tent, trying to get to the dried porridge in my pack. By the time I had discovered it however, there was already a hole in the bag and porridge oats were littered all around my tent. I needed the mouse to get out of my tent but I didn’t want to kill it as I would have ended up with squished mouse guts everywhere. So, I shooed it away by waving my book and barking some rather loud curse words at it. I plugged up the hole and went back to sleep.

The next morning, we were in less of a rush to get going as we only had 17k’s to get to Boyle Hut. It was shaping up to be a beautiful day so we got our things together and got going. However, as the morning wore on I started to feel rather ill. By mid-morning it was all I could do not to throw up, the minute I stopped moving the gag reflex threatened to rise up. I don’t know what was wrong but I suspect that the combination of a tight and heavy pack strapped to my stomach and a slight touch of flu which I did my best to ignore in the days before had finally reared its ugly head. As we crested Anne Saddle, the highest point of the track, I was feeling very disappointed that I was so ill I was unable to appreciate the spectacular beauty of the place. The tough, stunted and persistent beech forest with its variety of mosses and fungi in shades of green, brown and red was stunning, and completely lost on me. As we came down the saddle and into the valley the landscape changed once again, from a sub-alpine bush to a valley with the track meandering through the tussock. The track became extremely muddy as most of it was under water from the rain the day before. We stopped for lunch at Rokeby Hut and while everyone else ate I went off for a spew.

We got to Boyle Flat Hut at about 3pm so we had plenty of time to put our feet up and enjoy the sunshine. I pitched my tent and, as I had thrown up my breakfast and had nothing to eat since, I made a big pot of pasta with tuna. Everyone gathered around the table in the hut and we spent the afternoon chatting, reading and relaxing. That night, because the moon was not visible to us from behind the hill we had an unobstructed view of the stars and were able to see the entire Milky Way above us.

The next morning, I was feeling much better and we packed up early as we had to tramp out and pick up the van to get to the 6.45pm sailing of the ferry. It was an enjoyable, relatively easy walk out; we started to spot all the signs of the landscape giving away to farms and the track itself improved as we were in the territory of what could be done in a day walk. We followed the Boyle River down the valley where it became narrow and the trees became taller. The one really special thing about being on the St. James Walkway at this time of year is the mushrooms, I lost count of the different species we had seen and it looked like a fairy tale forest with its red toadstools and tall, straight trees. We arrived at the end of the track at the Boyle River Outdoor Education Centre ahead of schedule so many of us took the time to clean ourselves up a bit for the ride back to the ferry.

In Picton many of us bought some well-deserved ice-creams and relaxed. Thinking about how much lighter we all felt without our packs and how strange it was to be in civilisation once more. As a way to spend my Easter weekend, this would probably top out my list. This tramp was a great adventure and the track itself runs through some of the most varied and beautiful terrain in the country. Add this to some excellent company and lots of chocolate, I could think of nothing else I would rather be doing.

Absolutely well worth doing for anyone, this tramp is challenging but not so challenging that you are unable to appreciate the spectacular beauty of the landscape and the people who give you the moral support to continue, even when you do barf up your breakfast.