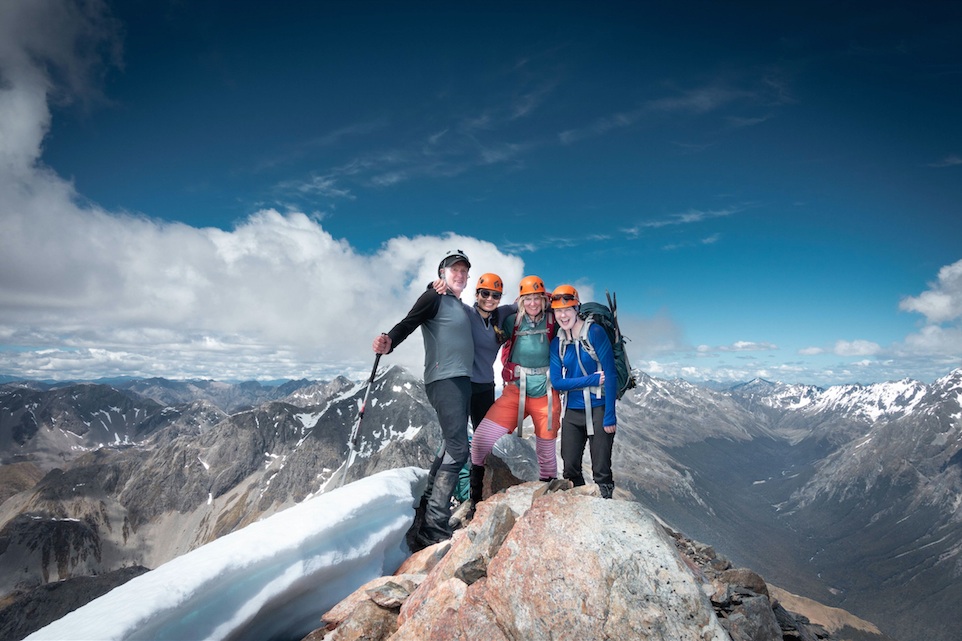 Spring was marching on, the snow was melting, and enthusiasm for alpine trips appeared to be on the wane. I felt like I hadn’t squeezed enough out of my snowcraft experience yet, so when Tony G offered Angelus trip-goers another bite of the cherry, or should I say bite of the ice axe, I pounced!

We went for Cupola, the “easy and good fun” option. Keen beans Caryl and Maj-Britt were also ready to swing an ice axe again, and with a very reasonable forecast for Nelson Lakes National Park, all systems were go.

After the usual routine of ferry, drive and camp, we rolled up to Kerr Bay at Lake Rotoiti at 8am sharp to catch the water taxi. Although the weather was fine, the preceding days’ heavy rain had left the Lake rather full, and the jetty at Coldwater Hut was underwater. This required some Jesus-like skills of walking on water (which unfortunately I don’t have) so, before even taking a single step on the track we had wet boots!

Our destination for the night was Cupola Hut, which according to DOC was a 7 ½ hour walk from Coldwater. We set a cracking pace up the Travers Valley, which I got the blame for, but I had to escape a little buzzy friend I had picked up earlier in the day when he had tried to pollinate my bandana. However, the long, lounging breaks on sunny grassy flats, including a great campsite five minutes past the junction with Hopeless Track, gave him plenty of chance to catch up. I still hadn’t ditched him at John Tait Hut, and so I accepted my fate and became Queen Bee for the rest of the trip.

The climb from John Tait to Cupola was a rather rude ending to the day. I quickly ran out of steam on the final zigzags, but my companions had superb levels of patience, and the numerous stops didn’t seem to bother them. At 5.30pm we arrived at Cupola, a cosy little hut with an incredible view of the opposing circular basin, and the impressive Mount Hopeless (see this year’s journal for an epic account of climbing Mount Hopeless by Nick, Elisabet and Gareth). We set about making the hut even cosier, with Tony chief fire warden minding the fire, and the rest of us taking charge of dinner. Not long after our arrival we were joined by a friendly father and son duo who were visiting Cupola after their plans of doing the Travers-Sabine had been thwarted by rain. They ended up watching and photographing some of our ascent the following day (see the picture at the bottom of the page). We settled down to a very comfortable night, with Maj-Britt even reading us a bedtime story about the Richmond Ranges from the WTMC journal!

5.30am rolled around very quickly, but the “alpine start” was made easier by the beautiful blue sky slowly revealing itself outside. We were ready before 6.30, with bags packed for a half-day ascent (which turned out to be a little optimistic!) Cupola Hut is just below the tree line, so a two minute walk up the track will deposit you at the tussock fields that mark the start of the climb in earnest. Emerging out of the bush to a beautifully lit up mountain was an exciting moment – it looked just like all the pictures I had been pouring over for the past few weeks. I could even see our intended route up the mountain – the Grade 1+ from the New Zealand Alpine Club’s Kaikoura to Kahurangi guide. The route lead us across the tussock and scree slopes, onto a good snow patch, and then up a snow-filled gully next to the summer “zigzag” route. The last stretch to the top was obscured by a rocky outcrop. But all in all, having done many a lunch time googlings, I almost felt confident approaching the mountain!

Something I have discovered since waddling into the world of alpine is that mountain climbers have their own special language. My new favourite word is the “crux” which means the scary and/or tricky bit of the climb. A warning to readers: this word is liberally and inappropriately applied to any and all sections of the trip for added drama and excitement!

Crux number 1 came early. After wandering up the tussock field, we got onto alternating scree and snow patches. While the others sensibly followed Tony across, I struck out on my own and climbed higher before traversing. Of course, the boulders were bigger up here and the gaps between boulders and snow were ready and waiting to catch an awkward climber. I managed to wiggle into one such nook, which I then struggled to wiggle out of. This left the others wondering where Aimee had gone for a good ten minutes. There was a shout of relief when my orange helmet became visible amongst the rocks again!

After the scree field, the snow became a bit more continuous so crampons went on. We took turns at the front, slowly but surely kicking our way up an ever steepening slope until we were level with the beginning of the zigzag summer route. At this point we were reaching our limit of steepness, and we couldn’t see the top of the snow-filled gulley we were marching up. We made a group decision to hop off the snow and try the summer zigzag route. This actually proved a really good choice as the snow in the gulley ran out further up revealing impassable boulders. However, the zigzag was also home to crux number 2.

The zigzag is a narrow ledge covered with a mixture of snow grass and rock. I had never really done any scrambling, so this was a fast introduction to real mountain climbing! At one point, Tony took us on a short cut straight up. This proved quite testing for me, as footholds were scarce, the snow grass was slippery, and the consequences of a fall would have been rather unhappy. However, Tony and the others gently coached me up the “crux”, happily waiting for me to test footholds and handholds until I felt safe enough to move my weight. At the top of the zigzag was a larger rock patch, which proved a good place for me to collapse and rest my shaky little legs!

After another good rest, we carried on up the rocky bit as it rounded off to the left. We got crampons on for another small snowy traverse, took them off on the other side, and arrived at crux no. 3 – really just another awkward sharp bit of rock to get over. But by this time we had been at it five hours, and I was feeling physically and mentally drained from the climb. Poor Caryl had to demonstrate multiple times how to get up and over the sharp bit, while Tony and Maj-Britt were sitting above, obscured by rock, and undoubtedly wondering what was taking so long!

I was beginning to wonder if I could get to the top, let alone back down again. My heart sank when Tony, who was ahead, shouted that there was something funny going on with this mountain. I was sure this meant we had climbed the wrong way and had run into an impassable obstacle, or perhaps we had even climbed the wrong peak! Tony’s head disappeared for a moment, but then it came back and declared that, the funny thing was, we’d run out of mountain to climb! That could only mean one thing – we were at the top! My mood flipped like a light switch and with renewed energy I scrambled up after Maj-Britt and Caryl to find that indeed, we had run out of mountain – this was the summit!

I screeched in delight when I saw the summit cairn. Tony had earlier told us that lots of these mountains have a summit cairn, and buried inside the cairn is a tin with names of all the climbers who have made it to the top. I was going to get to add my name to the list of climbers of Cupola, which would make me a professional mountain climber! I quickly began dragging off the rocks and fossicking around for a tin. Unfortunately, the Cupola tin is missing. Tony has a suspect in mind, but until the tin is found and my name is added, I have some unfinished business with Cupola. Perhaps a WTMC find-and-replace-the-tin trip is in order?

As it turned out, my slowness played in our favour. We reached the summit at 12.30pm, with largely blue skies and only the occasional bit of cloud obscuring our 360 degree views. It really did feel like we had the world at our feet. After some carefully arranged photos (it is a very small summit, with not a lot of posing room) we scrambled back down to just above crux no 3 for a well-deserved lunch and rest.

Tony wisely cautioned at this point that we were only half way on our journey, and most accidents happen on the down climb when people relax and get careless. I assured him there was no chance of me relaxing! Carefully and slowly, we retraced our steps down the mountain. I was dreading the zigzag, but in fact it proved a bit easier on the down climb. For one thing, we could use bums for balance and stability! We also followed the correct route down the zigzag, which Tony had avoided on the way up because of the “step”. The “step” is an awkward step you have to make where the ground has fallen away a little bit and you have to press up close against the rock to get over. However, given the adventurous short cut we had taken on the way up, the “step” proved to be a piece of cake for us all. On reflection, I have dubbed this the Gazeley step, like the Hillary step on Mount Everest, certainly equivalent in difficulty.

After some more bum balancing and slithering over sharp stones, we were back at the beginning of the zigzag, awkwardly putting on crampons amongst the slots in the rock. Then it was off down the snow slope, with Tony glissading, Maj-Britt bum-sliding and Caryl racing down to the bottom! I stuck with my slow and small steps, trying to work on simple tasks like standing up straight. From there we took our time crossing the scree slopes and tussock field, enjoying the beautiful weather and surroundings. We even found an underground stream, so managed to fill our bottles (and stomachs) with clean Cupola mountain water. We arrived back at Cupola Hut around 5pm – a good ten hours after we departed for our “half-day” adventure!

Back at the hut, Tony got the fire going while Maj-Britt and Caryl organized dinner. I got to rest in a little exhausted heap, fed and entertained by my very kind companions. Despite the sore muscles, scrapes and bruises I felt incredibly satisfied. Looking back up at the mountain at the end of the day, knowing we had climbed all the way to the top and back down again, was a new and exhilarating feeling for me. I happily meditated on the achievement all the way back out the Travers Valley Track the next day, across the Lake, up the road to Picton, and back over the Strait to Wellington. What a trip!

I am always amazed by the generosity of club members, and Tony is no exception. With giving us an adventure like Cupola, he has opened a can of worms – we are now all bullying him into taking us on more amazing alpine adventures!