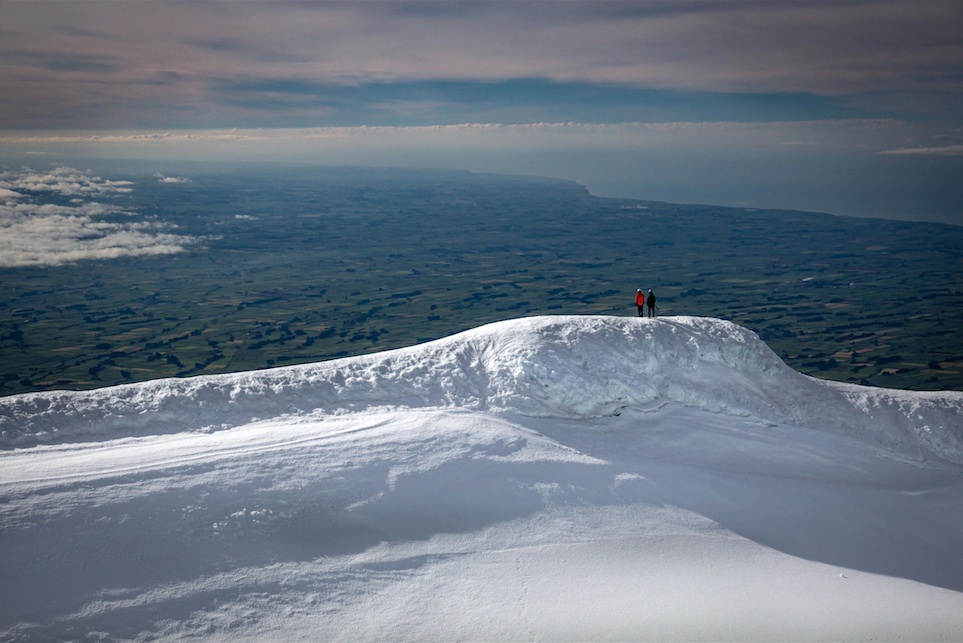 16 plus hours of plodding, scrambling, crunching, kicking and (bum) sliding, half of it in the dark, with no sleep, up one of the most serious and steepest mountains we know? Tony, Matt, Byron, Emily, Marie and Aimee all said “yes please!” (well, maybe not yes please, but at least they didn’t say no…)

A few nights previously, Tony had snuck into the bottom of an email the possibility of a night climb up Taranaki, timing our arrival with the sunrise, and making the most of a nice weather window over the Friday night and Saturday morning. I latched onto this suggestion, full of confidence from last weekend’s climb, and also possibly not knowing quite what I was signing up for. Emily, Marie, Matt and Byron did the same. We were all officially mad, but we didn’t know it yet. So, after a long week at work, and a long five hour drive to the mountain, we were packing packs and putting on head torches at Manaia Road end at 11.30pm at night.

Emily lead the way, but that was no good, she was too fast – we would be at Syme Hut far too early! I volunteered to lead as I have special expertise in slowing group pace down. Along we plodded, through the bush, up the wonky and gappy stairs across the tussock lands, onto the scoria where I spent a large amount of time with my hands and nose in the stones. Up, up and up we went. Mercifully, the slope eventually ended and delivered us onto the plateau. Crampons went on, and we crunched our way over a thin layer of snow to Syme Hut.

At about 3.30am we rudely awoke the occupants of Syme Hut with a creaking door, thumping boots and rattling billy. One poor, disorientated girl demanded sleepily from her sleeping bag that the windows be opened because we were trying to poison her with the gas cooker. We opened at least 3 windows but she wasn’t convinced and got up out of her sleeping bag to hover by the window until we had finished boiling the billy. While I felt bad for the interruption, the state of Syme Hut swallowed all my empathy. They had rubbish, old food and dirty dishes everywhere. I have never seen such a messy wee hut!

Confused bellies took in the hot drink, and in my case a date scone. We had a big climb ahead. At 4.15am we emerged back out into the darkness, with Tony and Emily leading us to the foot of our climb. Despite the light provided by the moon from the clear sky above, I could hardly see the white bump ahead. We stood for a moment, all of us seemingly reluctant to take that committal step. Tony said someone had to go first! So I took a step. Small steps, one after the other, leaning hard into the mountain. The others followed, and soon overtook. Dawn peeped over the horizon to the East, heating up quickly to an exciting red, and then stretching out warm and mellow over the mountain.

We stopped for a rest at a solitary little rock that Matt used to prop his pack up against. We decided that this inventive use of the rock warranted naming rights, and so the rock became Conway rock. Moments after leaving Conway rock, Matt’s head torch decided that it didn’t want to stay on his head, and instead jumped off and rolled back down to join Conway rock. We happily let it go.

Despite the improving view of the mountain, it seemed we weren’t making any progress – the top still looked as far away as ever. Taranaki was playing tricks on us, only revealing his true shape and height as we moved closer and closer to the top. I was struggling with the steepness, having to stop every 20 steps or so to catch my breath. Tony must’ve been watching me like a hawk, as he soon pointed out that my right crampon was loosening. We couldn’t do anything about it on the slope, so we just kept going. Tony reminded me to try and stay in the footprints of others, and to keep my right crampon as flat as possible. Whether it was the steepness, the sleep deprivation or breathlessness, I found this simple instruction very hard to follow. The others had to wait a long time, but eventually I stumbled up the last few steps over the lip of the crater, and into what looked like a jagged ring cake tin.

The sun was well risen by now, and it was amazing to see all the weird and wonderful ice sculptures poking out of the rim, dominated by the “shark’s tooth” to the north-east. After a rest, fixing up the crampon and forcing down a piece of chocolate (yes, a piece of chocolate had to be “forced” in!) we crossed the cake tin, traversed to what was the least steep area of the final slope, and pushed ourselves up to the summit. At around 7.30am, I joined my companions at the top, and promptly sprawled out on the snow.

I knew this was one of those once-in-a-lifetime moments, standing/sprawling just below the true summit of Taranaki, and I mentally tried to capture the scene and bottle the feeling of achievement. The snow underneath me was hard and cold, a relief after a hot, sweaty and breathless climb. Just beyond the little island of safety on which we were perched, the ground fell steeply away on all sides. Jagged ice and rock formations unceremoniously protruded from parts of the crater rim. Beyond these, perfectly circular rings of varying shades of green – deep green for the forest, light green for the fields – encircled the mountain. Towns and roads dotted the plains to the east, and the dense Tasman Sea occupied the view to the west. What a view, and what a feeling.

Unfortunately, what goes up must come down, and for me getting down was the hard part. The others simply walked back down to the cake tin, but whether it was the tiredness, the heat, or just fear taking over, I couldn’t follow in their foot steps. I turned in to front point, but for some reason all my confidence and logical thought had left me. I inched down in what was probably an abomination of snow craft technique, bum up, feet at awkward angles. Henry (our snow craft instructor) would have been ashamed! Eventually I got to a point where I could stand up, and Emily came up to lead me over to a flat spot just below the Shark’s Tooth where we could have a rest.

I forced in some more lollies and chocolate biscuits, and tried to mentally prepare myself for the next part of our descent. Tony took us down the Northern slope, as this was perhaps less steep than the Southern, or at least not as long. He lead the way, taking a gentle line and kicking steps for the nervous and wobbly new snowcrafters behind him. Marie bought up the rear, trying to encourage me along, and perhaps at some points wishing she had a stick she could poke me with! Eventually we reached a point where the snow was gradually giving way to rocks, and the poles of the summer route were clearly visible. We stopped for another short break before plunging on (by now the snow had melted a bit, so we could do a little bit more “plunging”).

When at last we were off the snow, we had more scoria to contend with. As I was spending more time on my bum than my feet, Tony took my pack off me and tied it to his own. I felt a little defeated at this moment. The one thing I had managed to do, at least since my first trip with the club, was carry my own pack. However, Matt, Marie and Emily had zoomed ahead, and for the good of the group, I needed to be able to catch up with them. While to me it looked horribly uncomfortable and unbalanced, Tony seemed to have no trouble managing it (he has definitely done this before!) Eventually off the scoria and onto the steps, I started nagging to take my pack back. Tony wouldn’t budge, and apparently Marie could hear my whining about it all the way down at Tahurangi Lodge!

We finally caught up with the others, having a snooze in the grass by the Lodge. At this point I did manage to swindle my pack back off Tony, and I marched away as quick as I could lest he should change his mind! Back on a tramping track I felt more comfortable, and we made good time to Manganui Lodge, and then back down to Dawson Falls, arriving at 4pm on the lawn we had stood on over 16 ½ hours ago!

Here we all plonked down in relief, and congratulated ourselves on surviving and being epic. We then wandered in a disorderly fashion down to Konini Lodge, showered, cooked a meal and had incoherent conversations. It was still light outside when we snuggled down in our sleeping bags, for one of the best sleeps I have ever had.

This was definitely the most “hardcore” trip I have been on with the club, and I couldn’t have done it without the support and patience of group members Byron, Matt, Emily and Marie and most importantly, Tony. I am conscious that without such experienced and patient companions, and without the glorious weather and generally good snow conditions, this trip would be a big no-go for a nervous and awkward snowcrafter like myself. Taranaki is a serious mountain (as I was coldly reminded by a quick google of accidents and deaths on the mountain). While it was great to have such experience to lean on, I realise it is also important to start developing my own judgment about what I am and am not capable of, and I am so grateful to be doing that under the watchful eye of caring club members!