As I passed Wellington airport with the orange needle horizontal on Cobham Drive, and the radio informing me that wind gusts of up to 140km/h were being recorded, I was beginning to wonder why I was heading into the hills. The horizontal hailstorms announced that summer had ended and autumn had begun. Buses were crashing in the street, branches and roofing tins were being flung about in space and yet again there was a large queue of frustrated passengers at the railway station waiting for a train, any train would do.

Being the last to arrive for the club bus, I got the back seat and to my delight was able to lie horizontal and go to sleep as we crawled along the Hutt motorway in winter weather. The usually Carterton eateries were visited and darkness descended. The stars were clear and bright when Paul and I started walking from the Putara road end at 9pm. There was no wind and only slight water vapour in the air as we headed up the track to Herepai Hut. Another freezing cold hut night, winter temperatures were here.

The tops were in their glory as we ventured out at 8am, outside being warmer than the hut. But by 9.30am we were in cloud and gale force winds until mid afternoon. Although there was no rain the wind chill factor had us scurrying into our packs for all our warm gear and the compass. Where exactly were we between East Peak and West Peak? The forecast was for easing Nor westers and when they finally eased, and the ranges in their glory appeared, we were slightly weather beaten and climbing Logan. We changed to spring weather apparel and start a conversation on the thrills and spills of navigating in white outs as all previous conversation had been severely truncated by neither of us being able to hear the other.

Heading south to Arête, at a more leisurely pace, we could begin to admire our surroundings and arrived late afternoon to an empty, well insulated 2 man hut. A brew in our hands, two robust, hard blokes arrive from Mitre Flats. They had walked into the teeth of the gale over Mitre, not known for its shelter in a nor wester and were heading over to Te Matawai. Real man stuff!

A scrumptious dinner (Paul’s catering was excellent), after dinner reading and discussion, was followed by 10 hours of sleeping

Sunday was one of those days you dream about being on the tops as the visibility was superb. From the top of Banister, Taranaki, Ruapehu, Kaimanawa’s, Ruahine’s, the hills behind Napier, Richmond Ranges and Kahurangi’s could be seen. Morning tea passed and hours could have been spent admiring the view but we were on a bus pick up schedule and the foot travel was more tricky than yesterday An airy rock descent from Bannister, we were glad summer weather had appeared, as this was not a place to be in gusty gale force winds.

The heat hit as we descended from Waingawa to Cow Saddle, where we followed the old DOC track from the saddle up the ridge to Blue Ridge over point 970m. (Thanks Allen Higgins for the tip. From Cow Saddle head up the spur from the Cow Saddle picture and there are pink markers up the spur on an easy to follow track. Where the spur reaches point 970 head south along the ridge until the main Blue Ridge track is reached. Where you join the track, there is a DOC sign (bent) pointing to Waingaura River and cut branches across this spur track. By using this route you do not have to descend from Cow Saddle into the Waingaura River and pass Cow Creek Hut).

A last picture stop on the Blue Ridge track, at the only view spot on the track, we could see Arête and the dip our previous night hut was in. It was now hot and the range is not known for its water supplies.

We arrived 7 minutes late at the pick up point, only to have an hour leisurely wait with washes, a brew, reading books, and discussing the nude tramper on the Blue Ridge Track we had met. Maybe the nude cyclist from Wellington has taken to the hills! 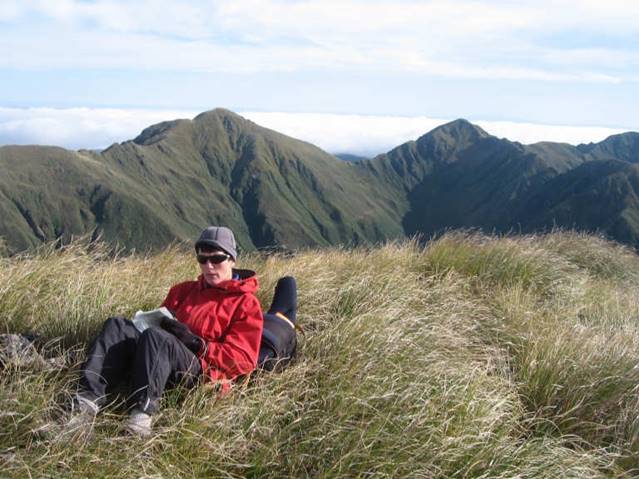