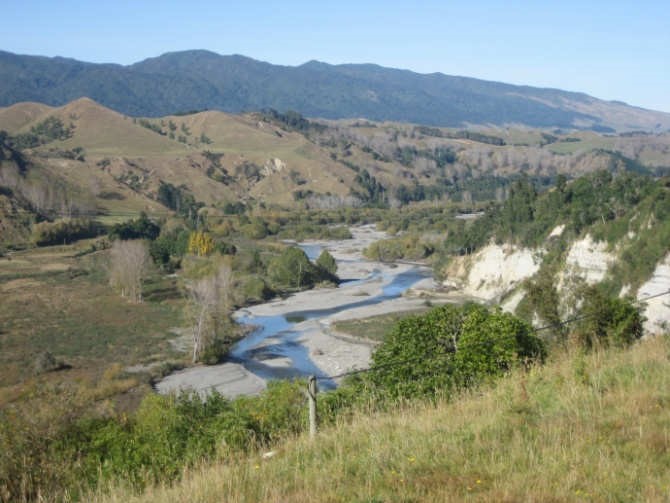 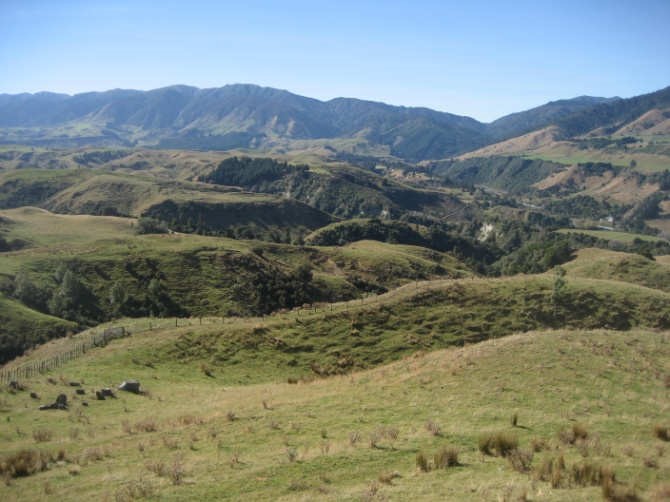 During a cycle trip last year Hans was positively surprised by the landscape of the Pohangina Valley so this year he made sure it was on the trip schedule again. He suggested that, although you can easily camp near the bridge north of Komako, the campground in the Totara Reserve next to Mt. Richards might even be better. We would have our tents as a base camp and ride loop trips from there according to mood, weather and fitness.

So on the 17 of April it happened. We decided to leave Wellington Saturday morning around 8.30 aiming to be at the campsite at 11 AM. We used our private cars to get there and managed to arrive within a range of 30 minutes, which proved our driving and map reading skills were up to scratch. We met two of our punters, Sharleen and Maarten, who had already stayed here for a night. They told us there were even warm showers! Indeed we found running water, a warm shower, a shelter and lots of space. We decided to set up our tents whilst uploading some extra food and drinks. The campground manager, who we happily called Miss Fulton Hogan given the car she drove, came to greet us and charged a reasonable 11$ for two persons and a tent.

We set out for our planned 40 km ride at noon. We took the West valley road south bound to Pohangina and the first bit consisted of a well used metal road. It was a nice ride during which we enjoyed the autumn colours from the trees with their bright yellow and red leaves. We stopped at the Waterford cafe in Raumai for an early lunch and some more carbo loading, and switched over to the East valley road which apparently was on the East bank of the river. This was all sealed road and actually had quite some traffic but nevertheless it was still enjoyable. The Ruahines were impressive in the background on the right hand side and the river curved its way through the landscape witnessed by cliffs and slips. Hans, Mika and Dirk made a small detour (Opewa Road) but after 4 km it ended in a private property. This meant returning the same way but now suddenly the downhill turned out to be a climb. However, it was a good way to spot kakariki’s.

At 4 pm we were all back at the campsite, lazily lining up for a warm shower. Mika preprepared dinner and her home-made meatballs in sweet & sour sauce were almost ready to go. It only required cooking some rice and turning a cucumber into a salad, but unnecessary to say that dinner was prepared in no time. This allowed us to spend some downtime chatting, and listening to the refreshing sounds of Sharlene playing the ukulele. After dinner Sharlene and Maarten left as they had other commitments in Wellington and couldn’t join us the next day.

By now it was 7 pm and it was dark. Although there was a fire ban we figured out that we could make a controlled fire in the spacious iron BBQ at the shelter. The wood gathered turned out to be dry enough and we enjoyed another two hours sitting near the fire watching the flames and a clear sky with lots of stars before heading to bed.

Apparently we choose the shadiest place of the whole campground which made us have a late start on Sunday. We left at 9.20 after waiting a reasonable time to find some sun to warm us as it had been a crispy night. We took the West valley road again but this time north bound to Utuwai. We weren’t in a hurry and during the more strenuous climbs we slowed down to have a good look around and to check the metal roads extensively for potholes, loose gravel and alike.

In Utuwai a major decision had to be made. Jill and Pete decided to go westward following the river down to the camp site, whereas Hans, Dirk and Mika decided to go for a longer ride with a detour eastward to Apiti. 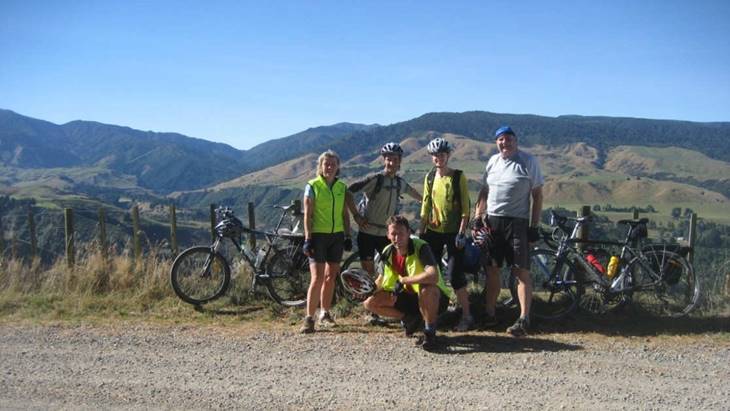 It took another 12 km and some more sightseeing, with Mt. Ruapehu in the distance, during a serious long climb to Apiti. It certainly was lunchtime now. The Apiti Tavern turned out to be a pleasant gem in the middle of nowhere and worth a visit. The owner of the place convinced us that Apiti ale is much better than tasteless Tui which actually lacks hop. We left the tavern at 1 pm and from here it was about an hour over the tablelands to Umutoi. The deer at the farms were gazing at us as if they never saw any cyclists before, which might be true as we didn’t meet any other riders on our way. Soon the energy boost from our Apiti ale seemed to have disappeared, so some snacks and muesli bars were needed to keep us going. Just after Umutoi there was a nice downhill and a bit later we joined the East Valley road along the Pohangina river again. We followed the undulating road for another hour and after a total of 65 km we were back at the campsite at 3 pm.

A note on the car told us that Jill and Pete left the campsite to drive back to Wellington at 2.30 pm. They had a long and relaxing lunch stop near the bridge north of Komako and covered the rest of their tour surprisingly quick (no serious climbs anymore). The total distance of the shorter loop must have been around 40 km and they arrived at the camp site just after 1 pm.

Unfortunately there was no warm shower for Jill as miss Fulton Hogan temporarily shut off the warm water supply. It was not clear why and for how long as later it turned out – by experiences from the others – that just a bit earlier or later it would have been all right.

We drove back to Wellington over the SH2 to be able to drop off Dirk at his home in the Hutt. It appeared to be 40 minutes longer than the SH1, but doing so we had a good excuse to pay a visit to the Yummie Mummie pie shop in Woodville and the sunset over the Tararuas certainly was impressive.