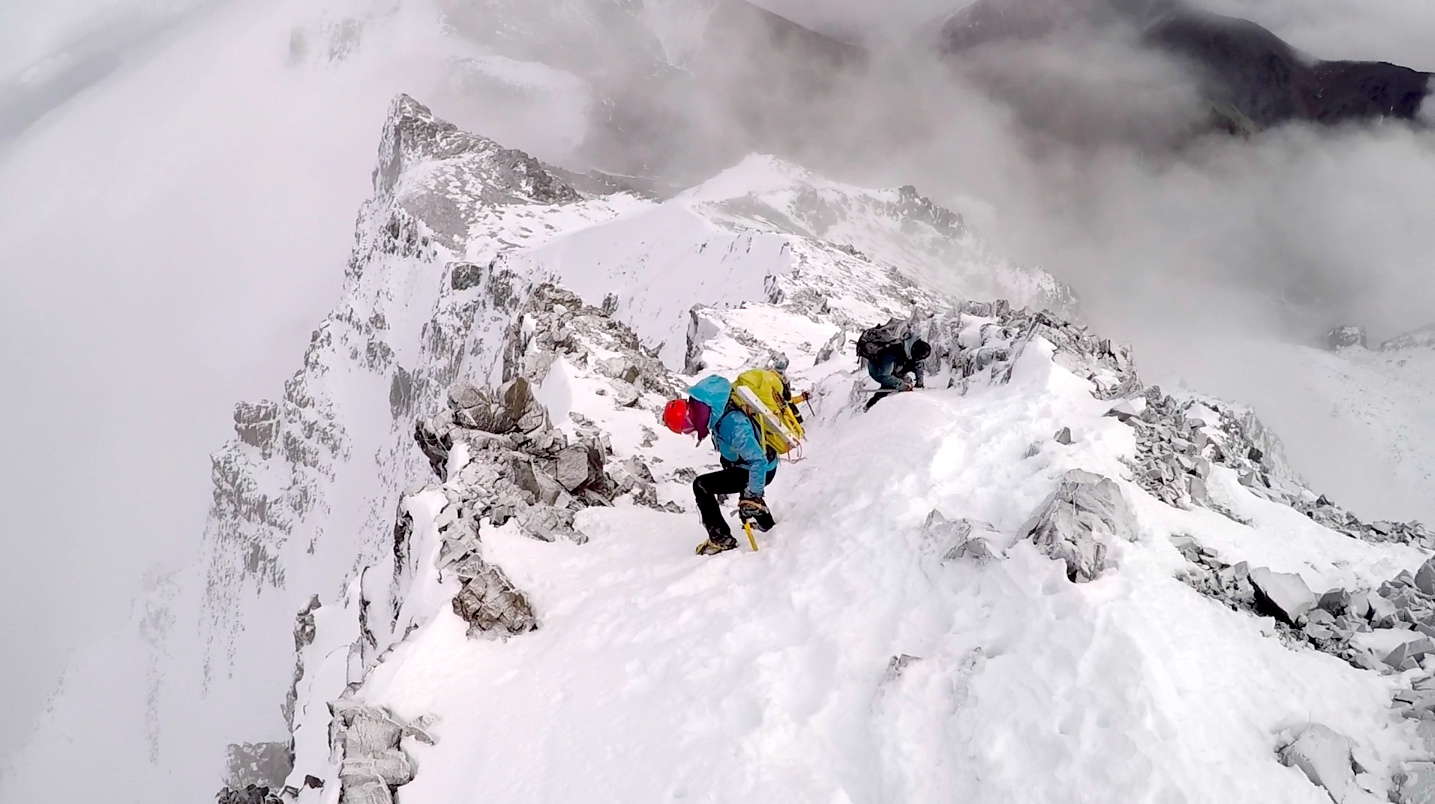 The 5pm Interislander is packed with familiar faces. We have the company of the WTMC, TTC and NZAC all heading for their long weekend objectives. After an uneventful crossing, we’re off on our own private adventure – to bag the summit of Mt Tapuae-o-Uenuku. Almost two hours after leaving Picton, we cross a suspension bridge and park up on a grassy knoll complete with toilet, where we set up camp for the night.

We wake up to a light frost in the valley. As we steadily load the gear into the packs, I’m beginning to wonder if I’m just a sucker for punishment for even suggesting we bring harnesses, stakes and hammers. We’d been warned of the need for ropes for the last 20m by a group the week before and either way it would be good training, right Nick?

After 3km of farmland, a pile of rocks and branches marks the drop off point into the Hodder Valley. Luckily for us the river is tame, never more than knee deep. Elisabet and I have opted for Gore-tex trainers, Tereza a second pair of tramping boots. 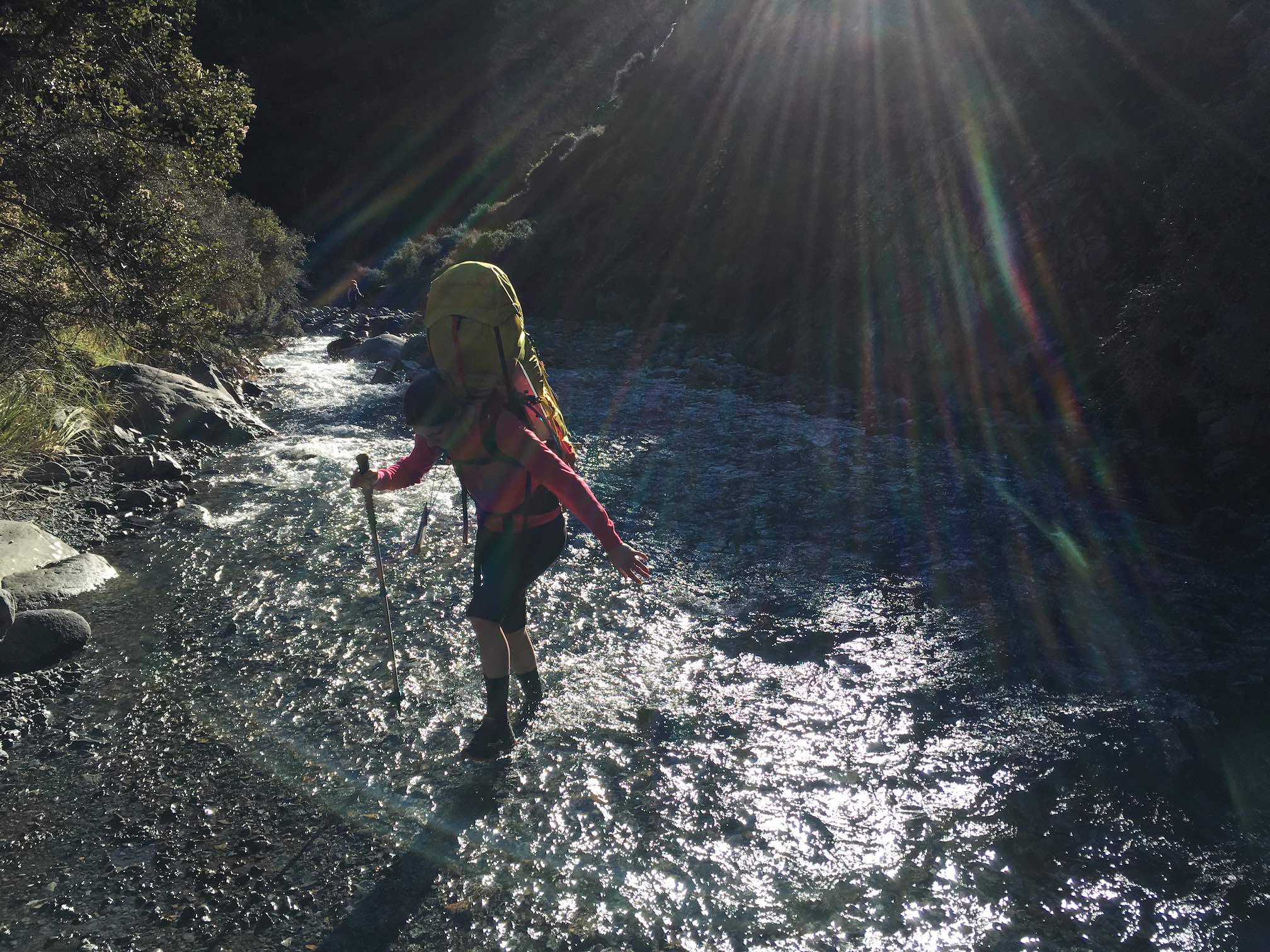 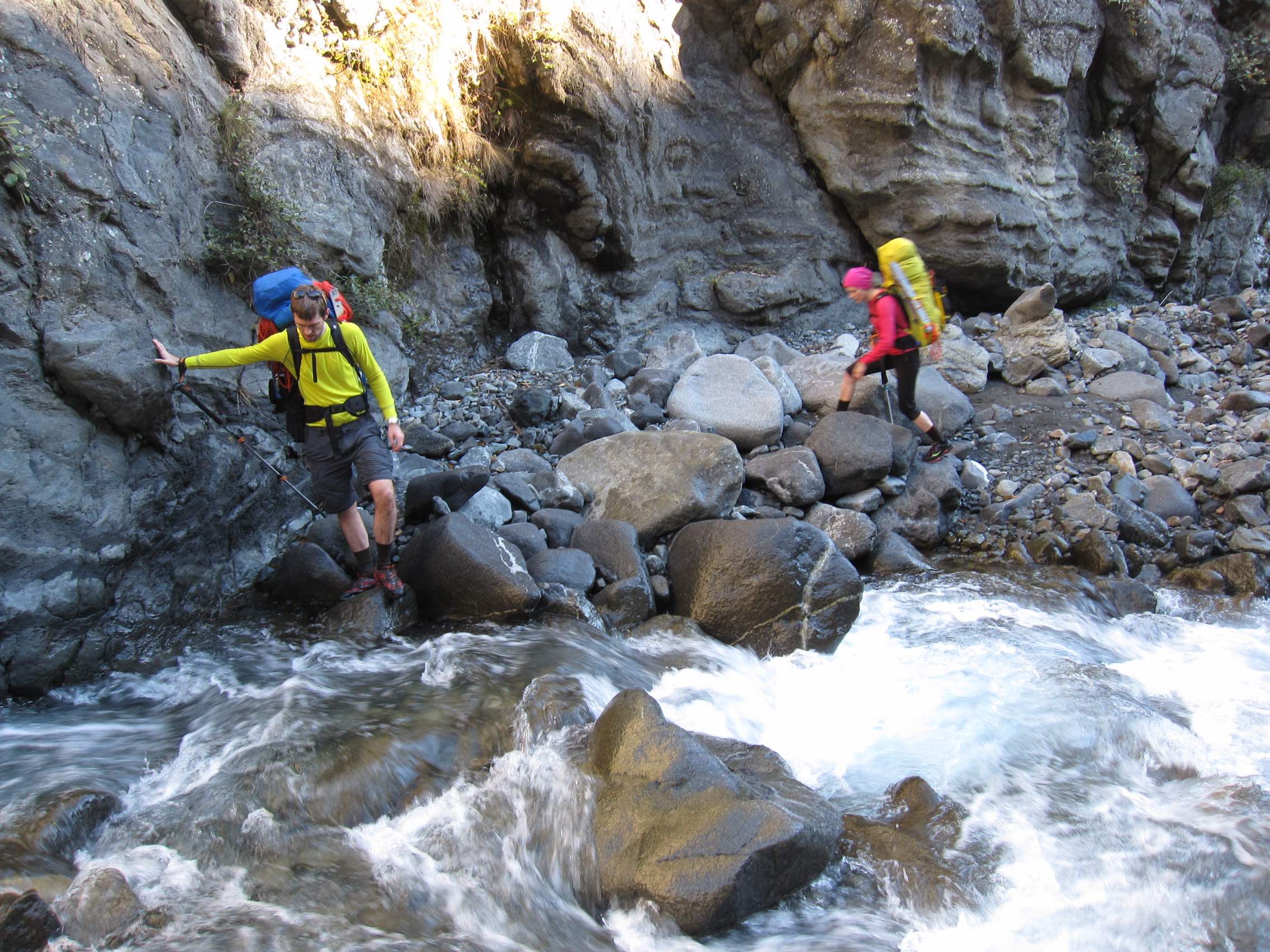 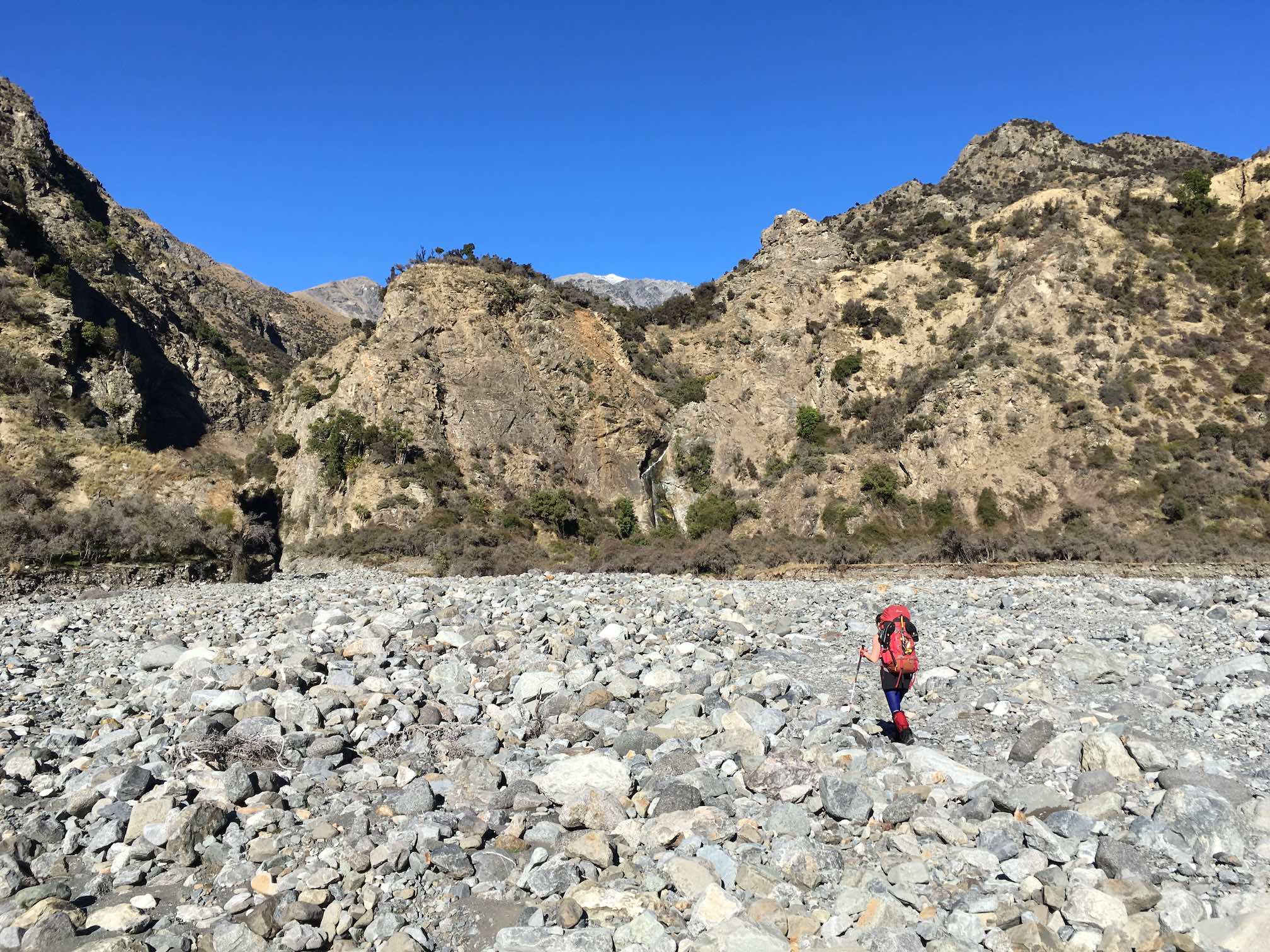 It’s 4pm when we finally drop our packs and set about making dinner. The huts are cosy with mould-free mattresses and decent water supplies. We talk weather and summit plans over the trusty Vege Goulash from the WTMC recipe book. The front from the South plans to drop first thing tomorrow, so we decide that we’ll check it out at 5am, and make a call from there. 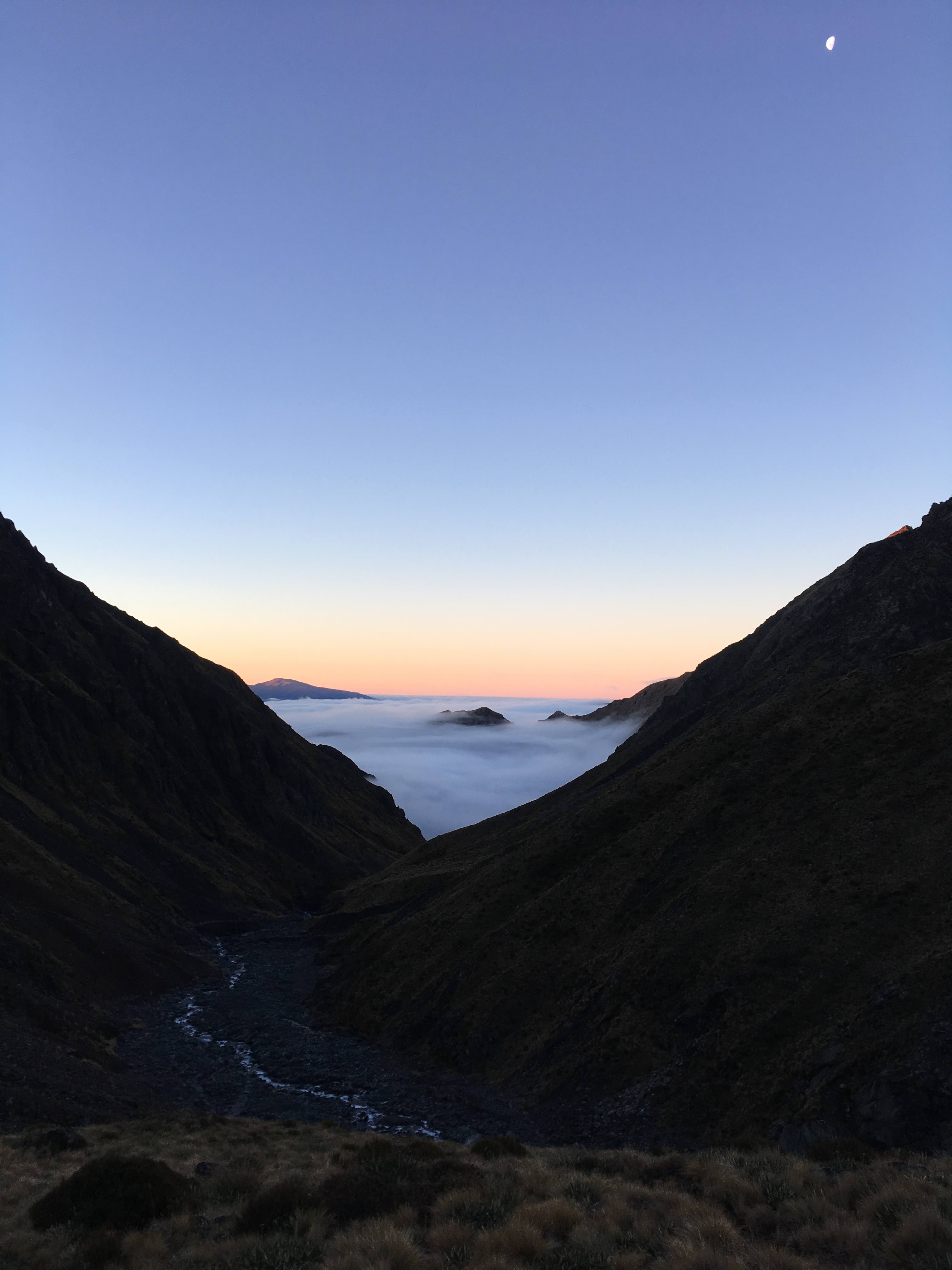 We are greeted by a perfectly still valley and a brilliant array of stars. It takes everyone a few minutes to fully digest the fact that if we want the summit, we have to leave now. A couple of boiling billies later and we are ready to depart.

We start walking at 6am, and the trail starts out easy enough – meandering up the grassy bank until we reach the huge scree slopes. After hopping over the river one more time we begin up the Staircase Stream, loosely marked by small rock cairns which are very easy to miss in the dark. As we reach the first terrace the light starts creeping in, enough to turn off the torches.

We lose the rock cairns on more than one occasion, always resorting to heading in the general direction of ‘up’. The going is very slow and the minutes are ticking by; this would be so much easier in the snow! We manage to find shelter from the increasing wind in a small gulley where we layer up and prepare to climb higher. At this point visibility is low and I am seriously doubting our decision to make a break for it early – the forecast promises it will clear up for a short time late morning but I just cannot see this happening. Still, mountains are mysterious beasts.

We eventually hit the snow and decide to switch to crampons and axe. From the first step it’s just perfect – that unmistakable sound as they connect with the crunchy snow. I’m soon in my element, French-stepping up the gulley realising this is what I’ve been missing all Summer!

It’s only when I break up over the lip that I realise our drive to gain altitude hasn’t paid off. Ahead of me is any icy bluff as far as the eye can see. Just like some trip reports warned – we’re in the wrong gulley! A small snowy opening to the SW beckons, which the GPS suggests will bring us right out on the mouth of the couloir to the top. Traversing 300m around to the edge of the bluff, the couloir opens up above us like a stairway to heaven, and the wind subsides.

Upon arriving at the top, we reach a huge basin, where we stop for some food, under the looming shadow of the route up to WP 2711. The summit is still out of view, but the air is calm, and it’s here that we make the group decision to go for it.

The next 400m of climbing can only be described as pure excitement. The terrain seamlessly blends frozen scree with crunchy snow with blue ice. With each and every step, the air clears, until there it is, the top staring back at us, within touching distance. 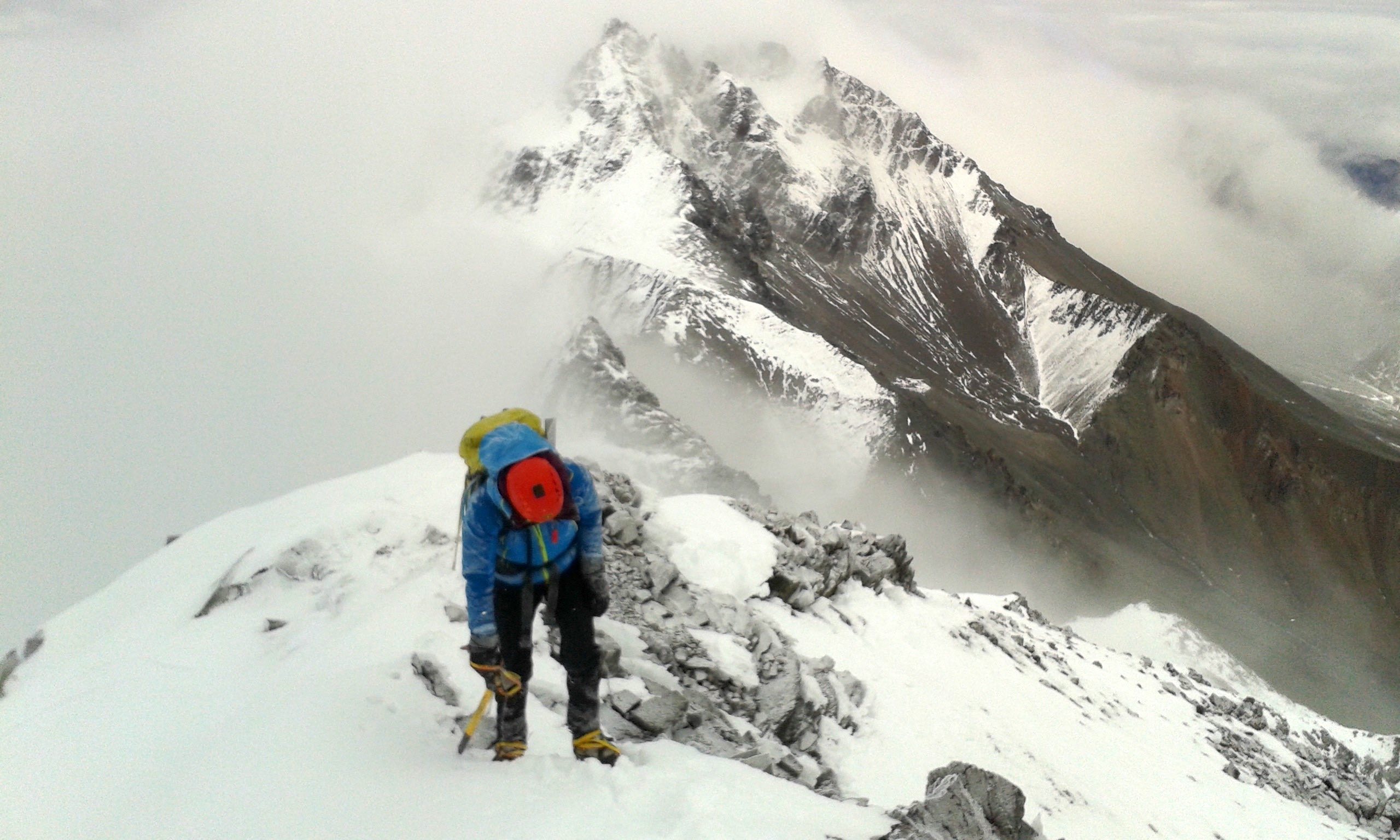 One section necessitates front pointing with a few swings of the axe, just to pull us up over the half metre of frozen scree back to the comfort of the hard snow. Another one, this time a metre high, blocks my view… as I haul my weary legs up over the top and look up, I see nothing but sky. The terrain flattens out and I realise that I am standing on the summit of Mt Tappy. 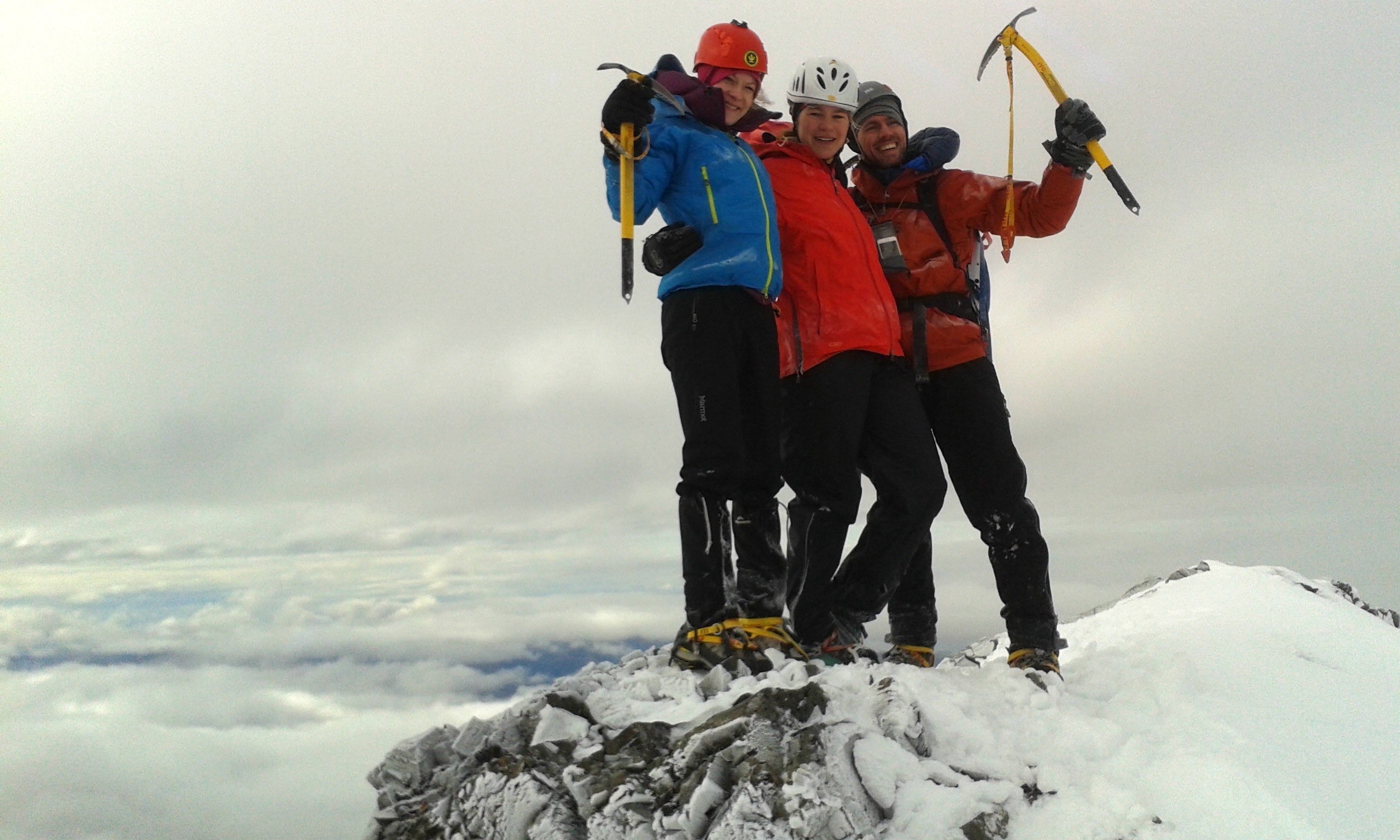 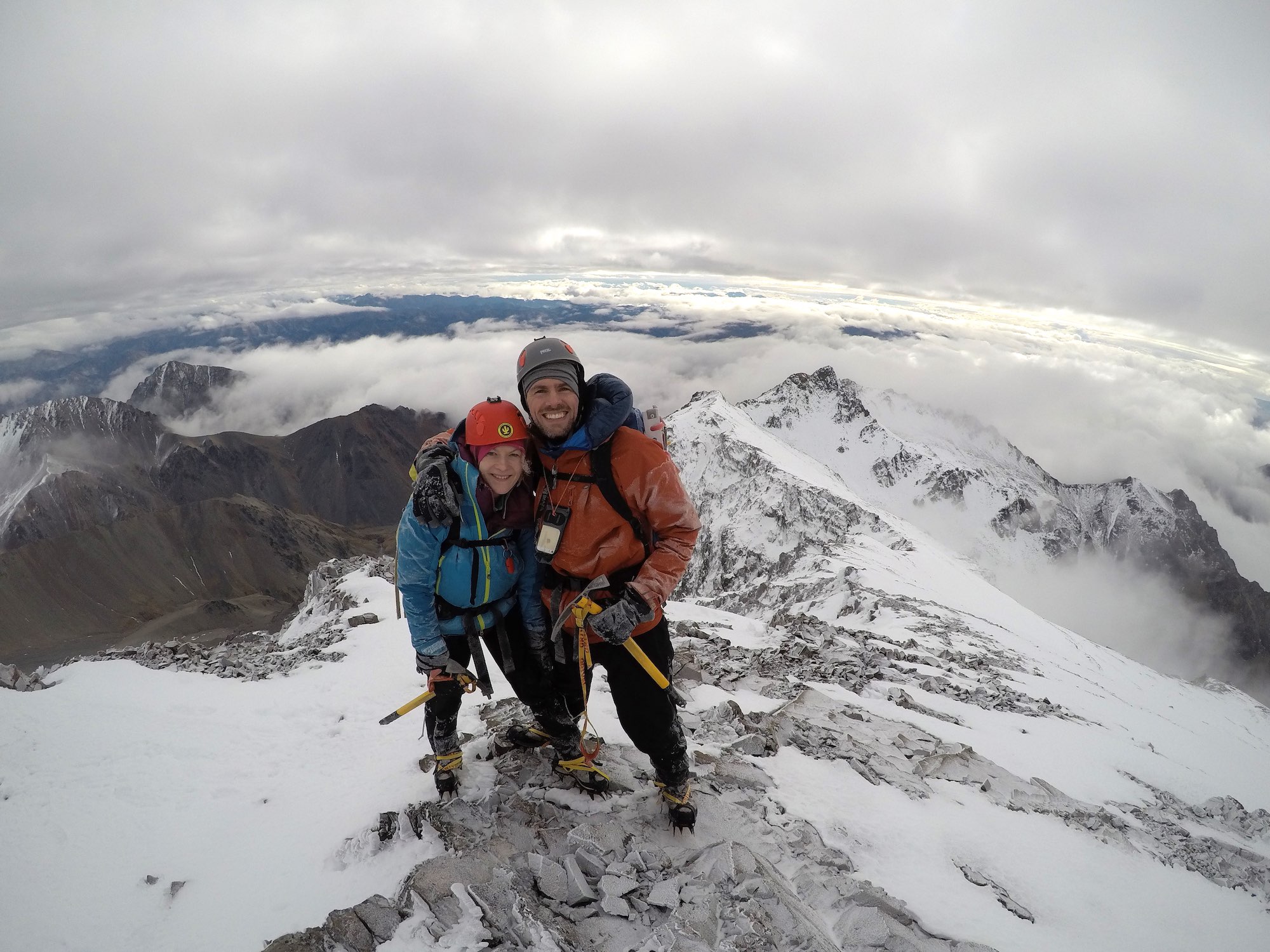 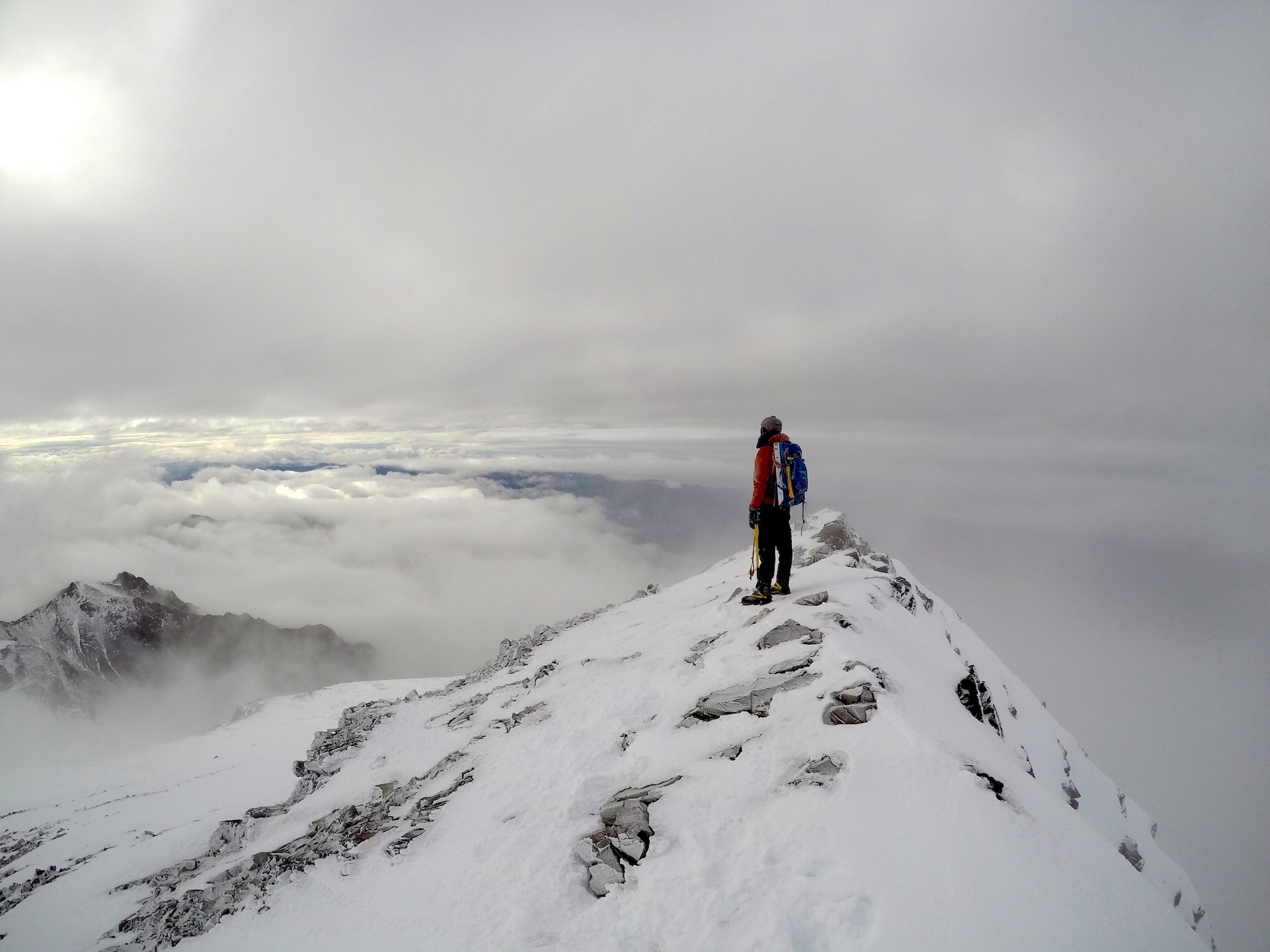 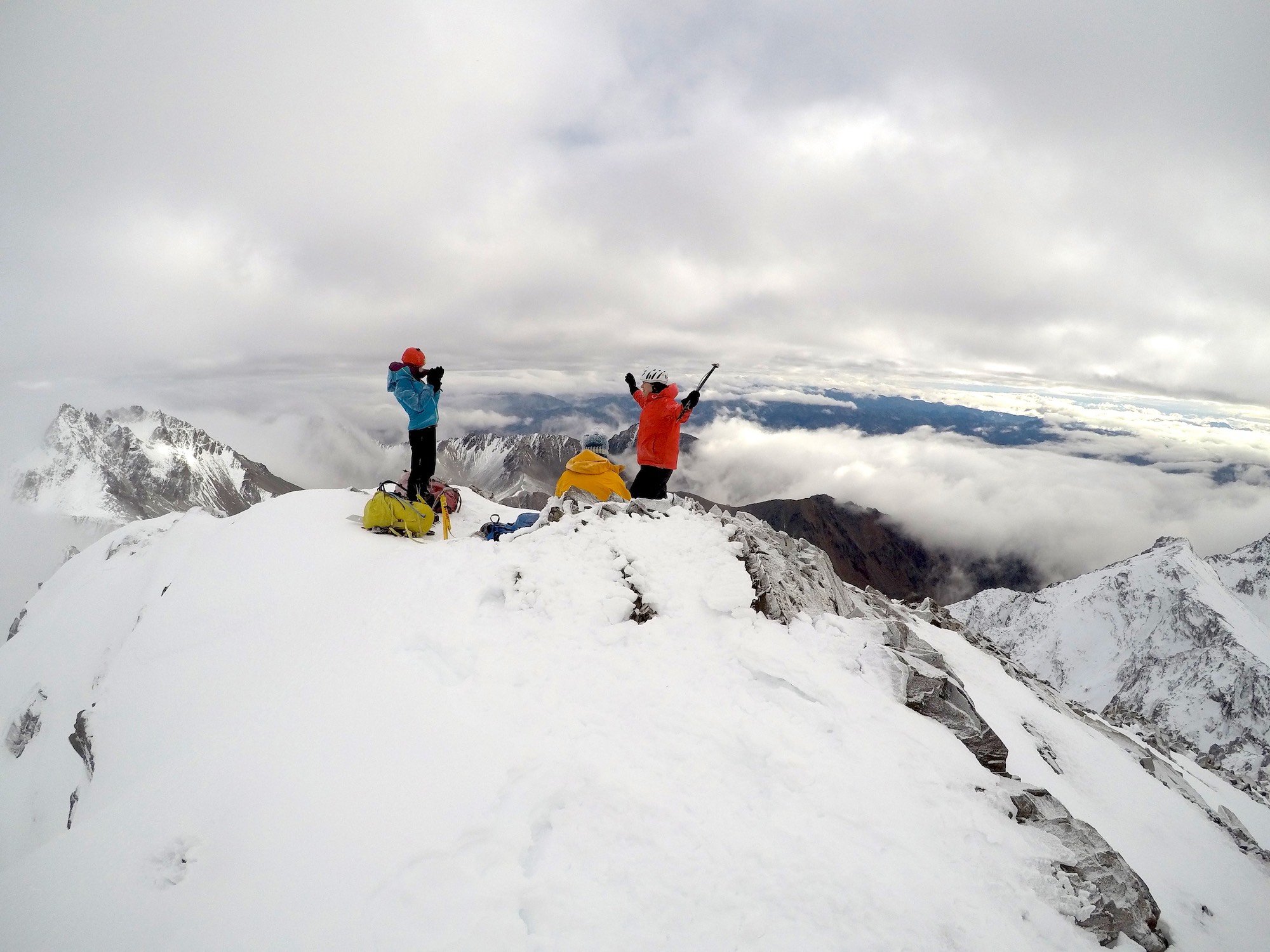 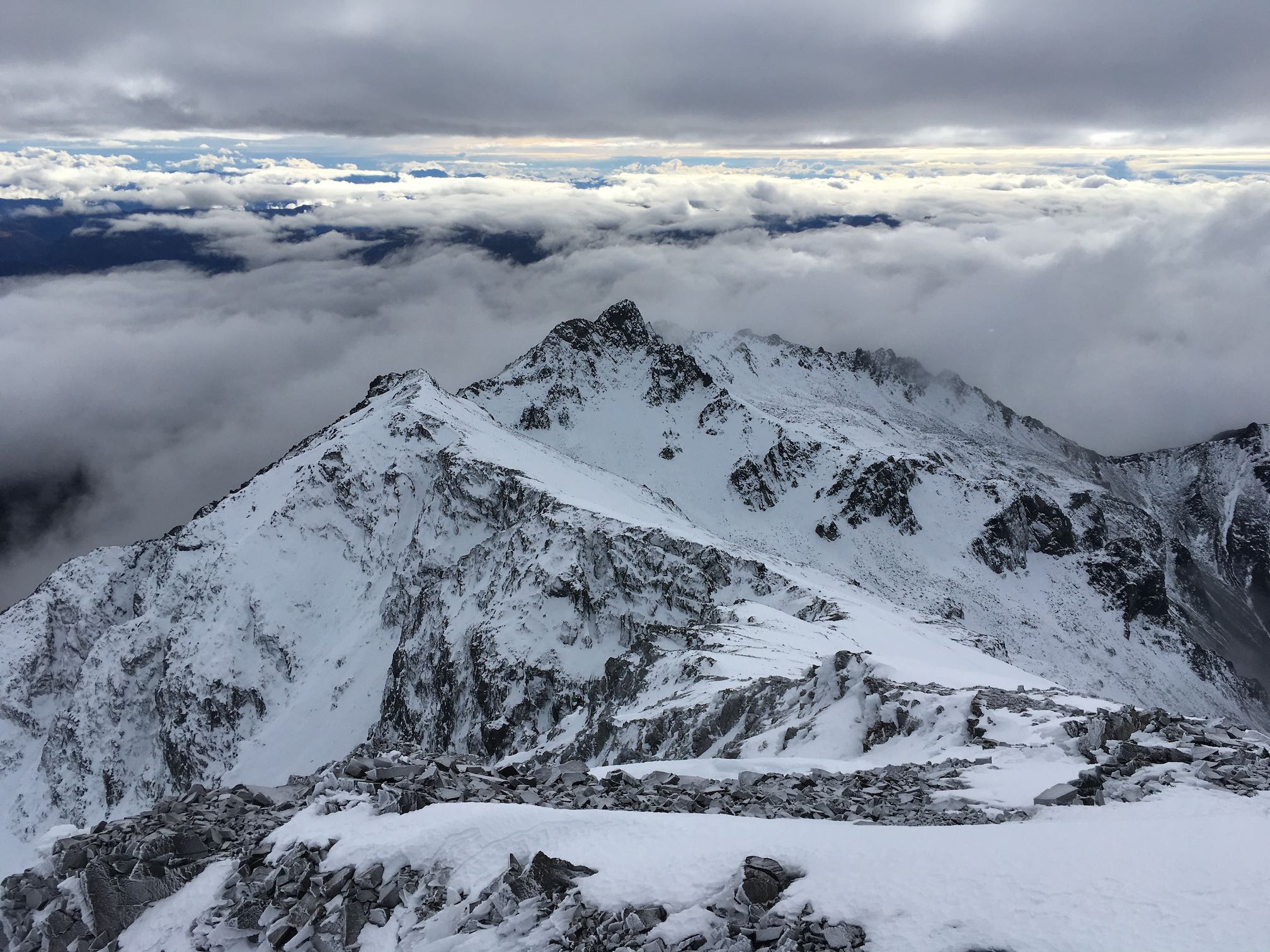 The feeling is immense – a mixture of both sheer joy and trepidation. It’s 12noon and the break in weather we were promised has touched down at the perfect moment. We spy Mt Manukau to the South; Alarm, Mitre and Pinnacle all around us. After a flurry of photos and congratulations, we put our game faces back on and begin the descent. 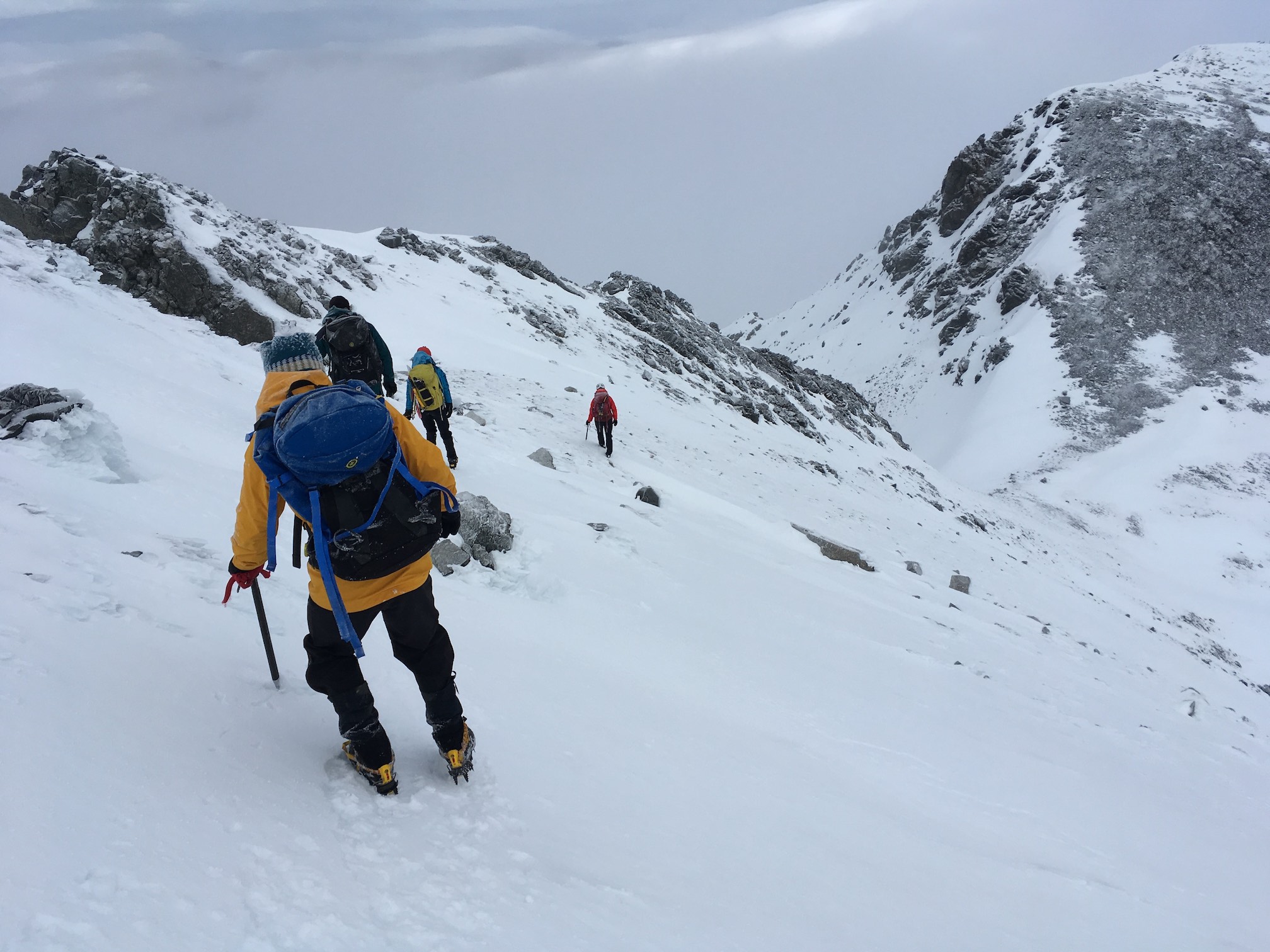 The down climb is every bit as exciting and challenging, only this time the cloud has cleared and we can see the path ahead. Careful movement brings us back down to the basin where we stop for another break, and I devour the very last of my jelly babies. 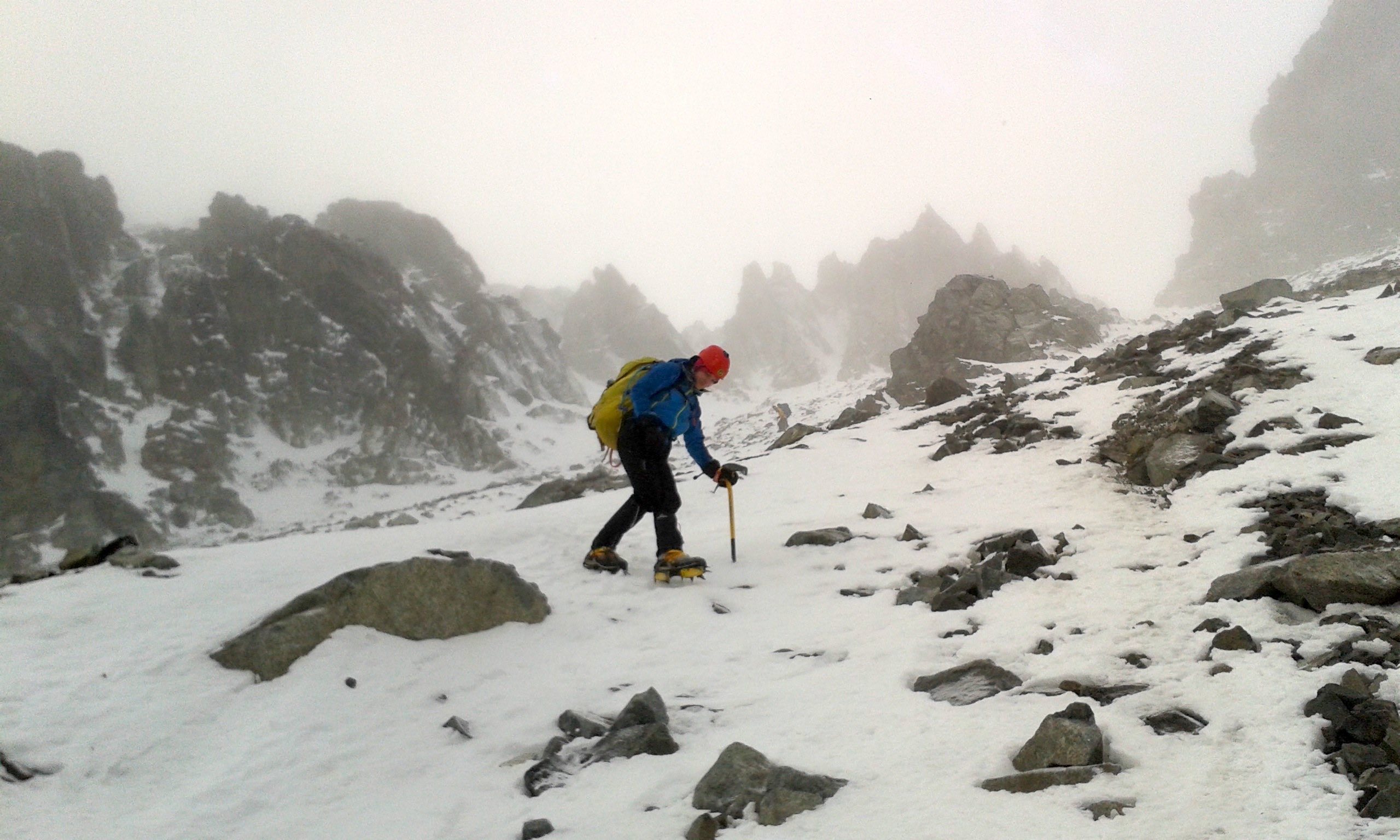 We finally reach the end of the snow at 2pm. We’re going slow now but we don’t mind, we’re in no rush.  This time we make sure to follow the direct route down to the stream, where it takes much less time to pick out the trail of cairns leading us home. As we cross the river and begin up the scree slope, the clouds close in and it starts to snow. We bounce our way into the hut at 4pm, 10 hours after leaving, tired but oh so happy. 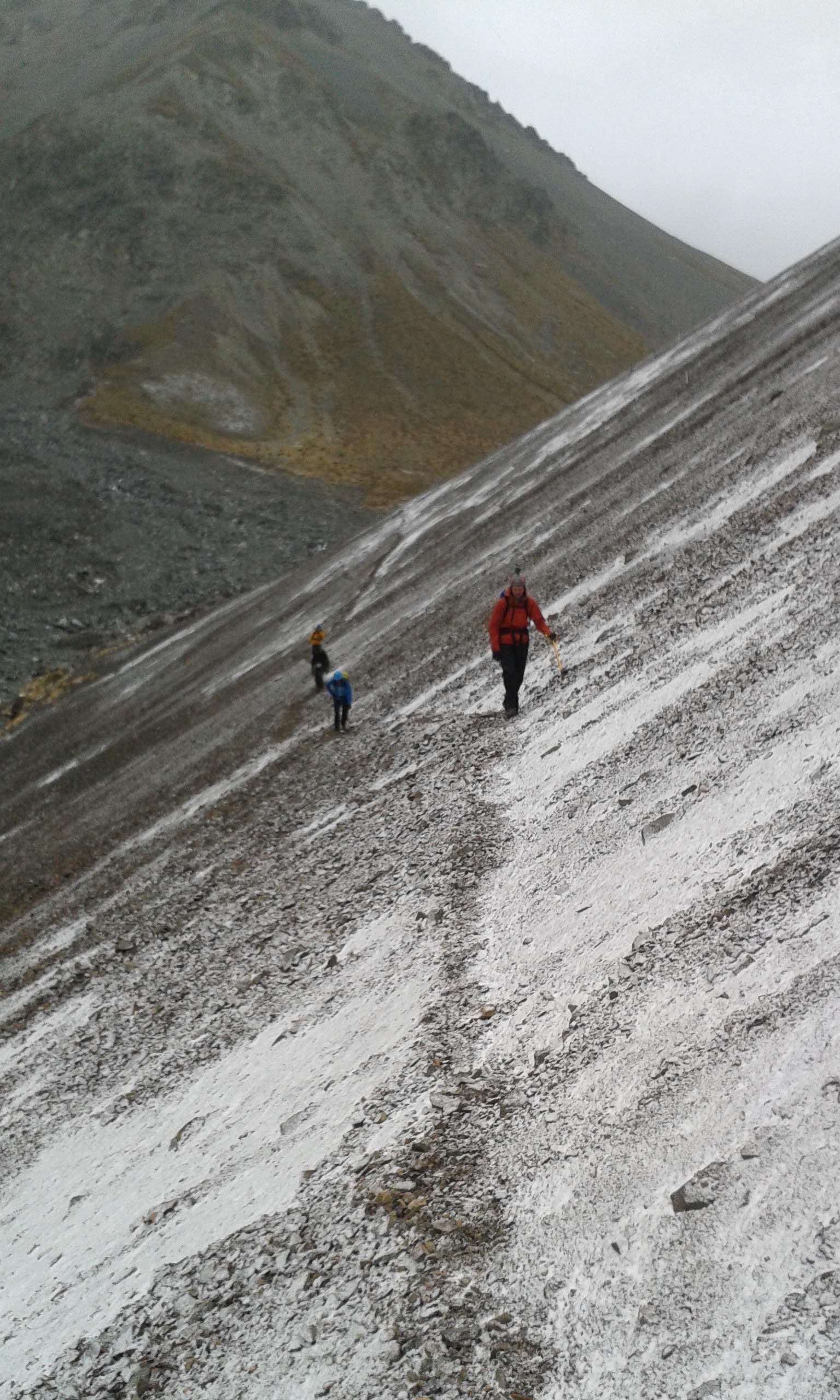 The hut is quiet by 8pm, lights out. The wind is picking up outside and the snow coming down now thick and fast. We know what lies in wait tomorrow – 90 river crossings through a very cold and damp valley.

We awake to find snow has blanketed the entire valley. We meander our way back down and over the gorge, eventually dropping into the river. This time we have proper boots and it makes all the difference. After countless hours and crossings, I am snapped out of my zombie-like trance by Tereza disappearing into the bush and up a conspicuous looking mud track. Only then do I notice the familiar looking orange arrow – it can mean only one thing, we’re back on the farm. The last 3km along the 4×4 track is the easiest yet hardest I’ve ever walked; we eventually collapse our packs beside the car and sit in the sun, knowing that the next stop is the pub in Picton and a well earned pint! 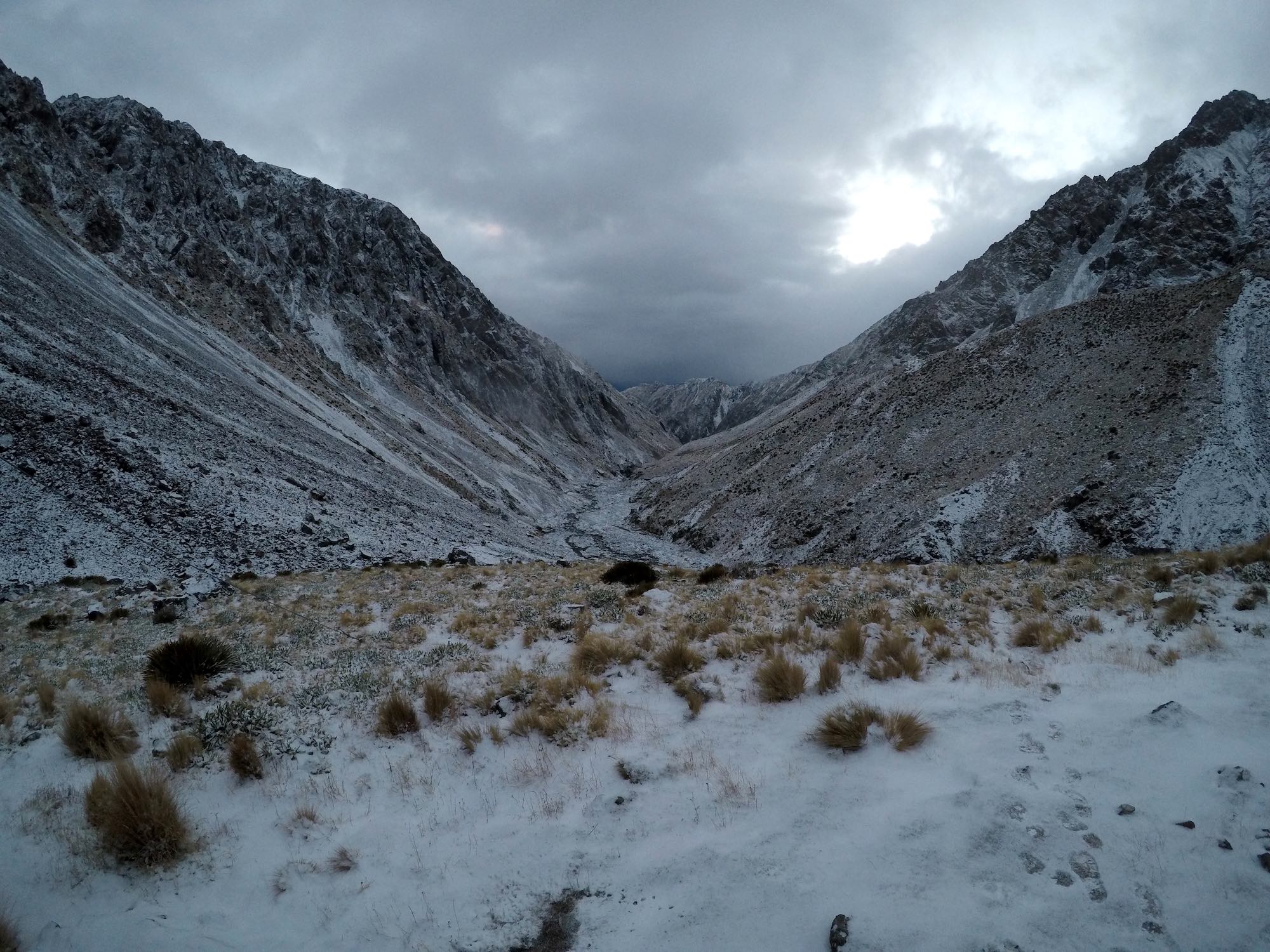 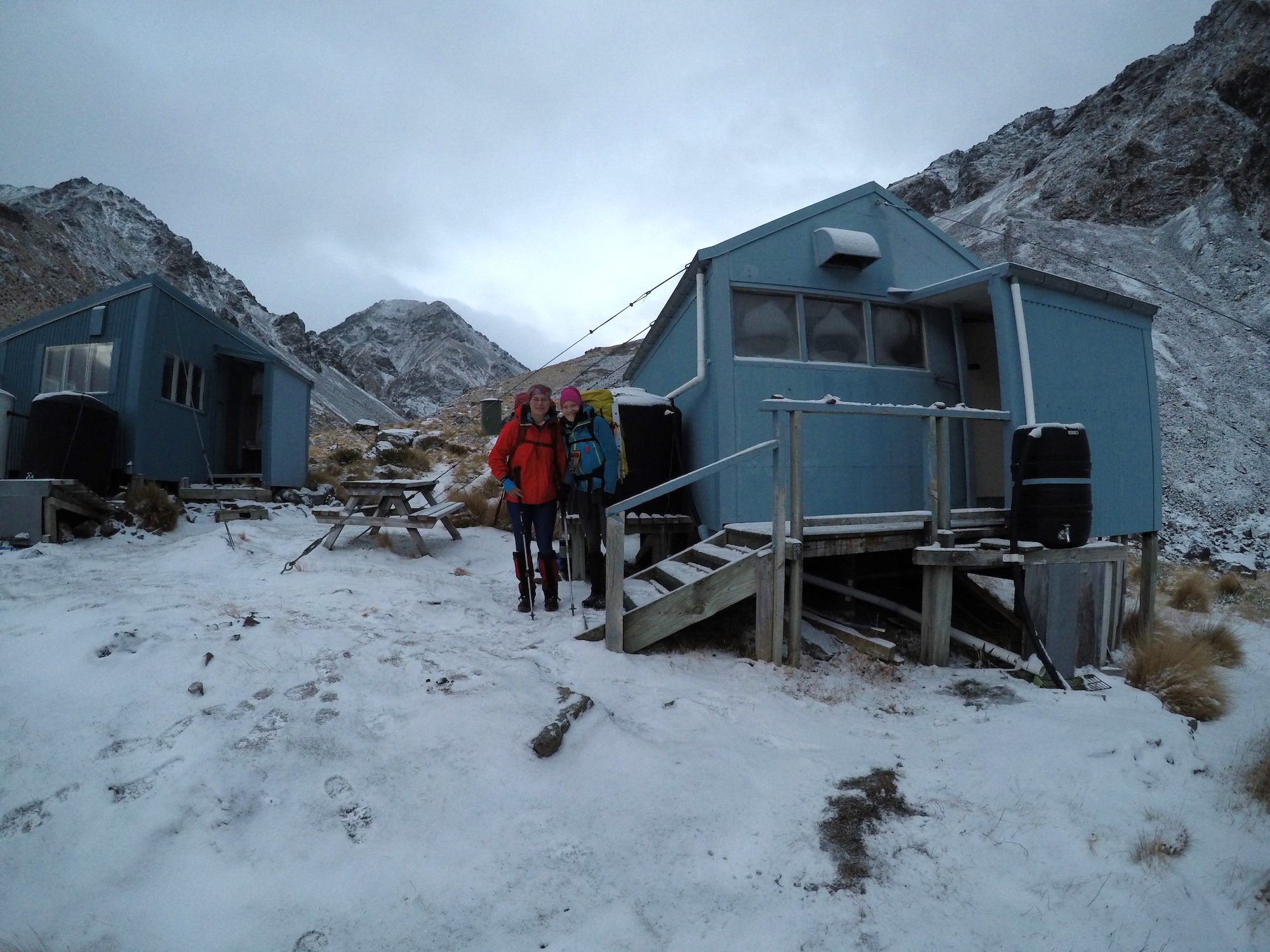 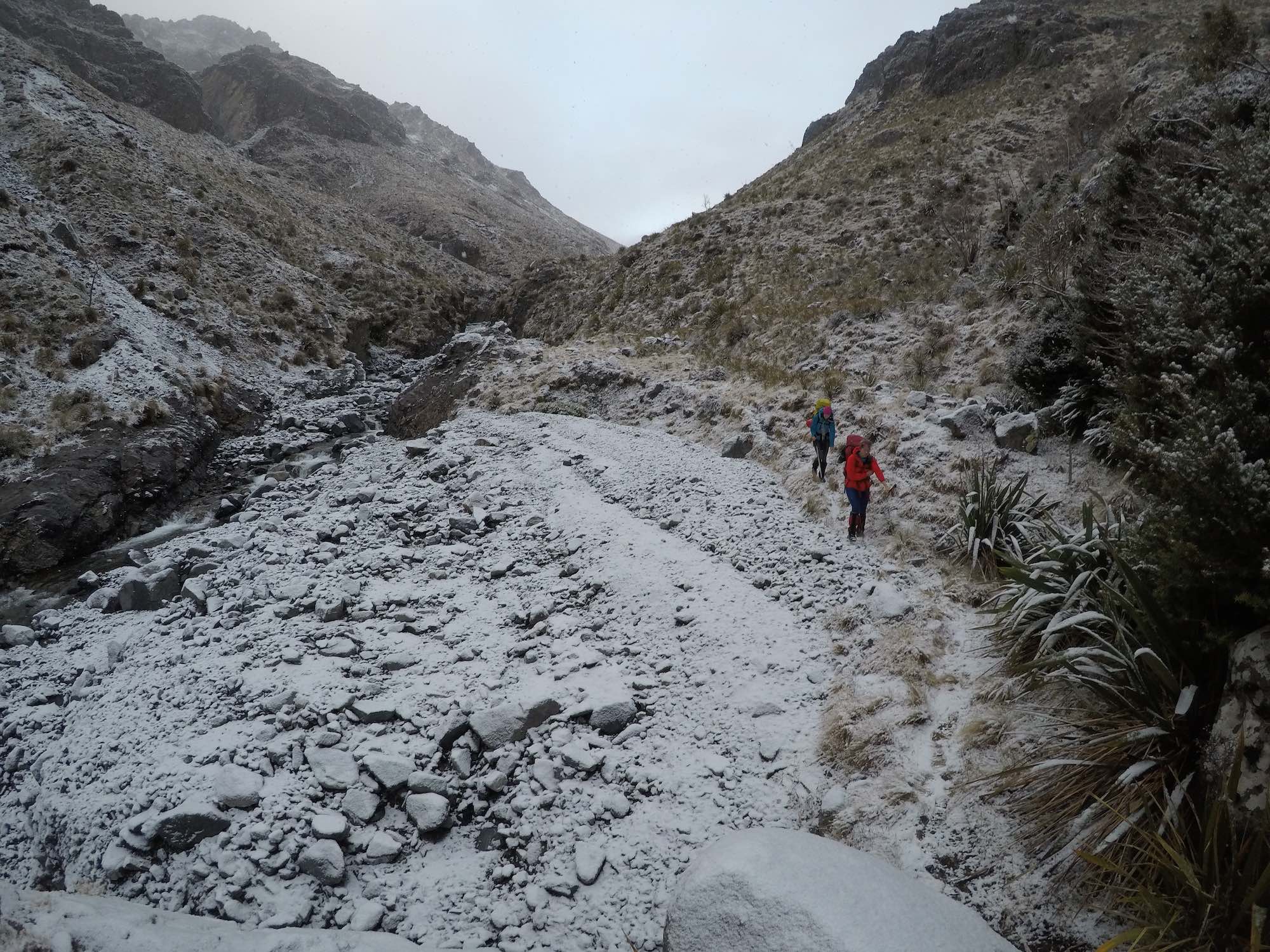 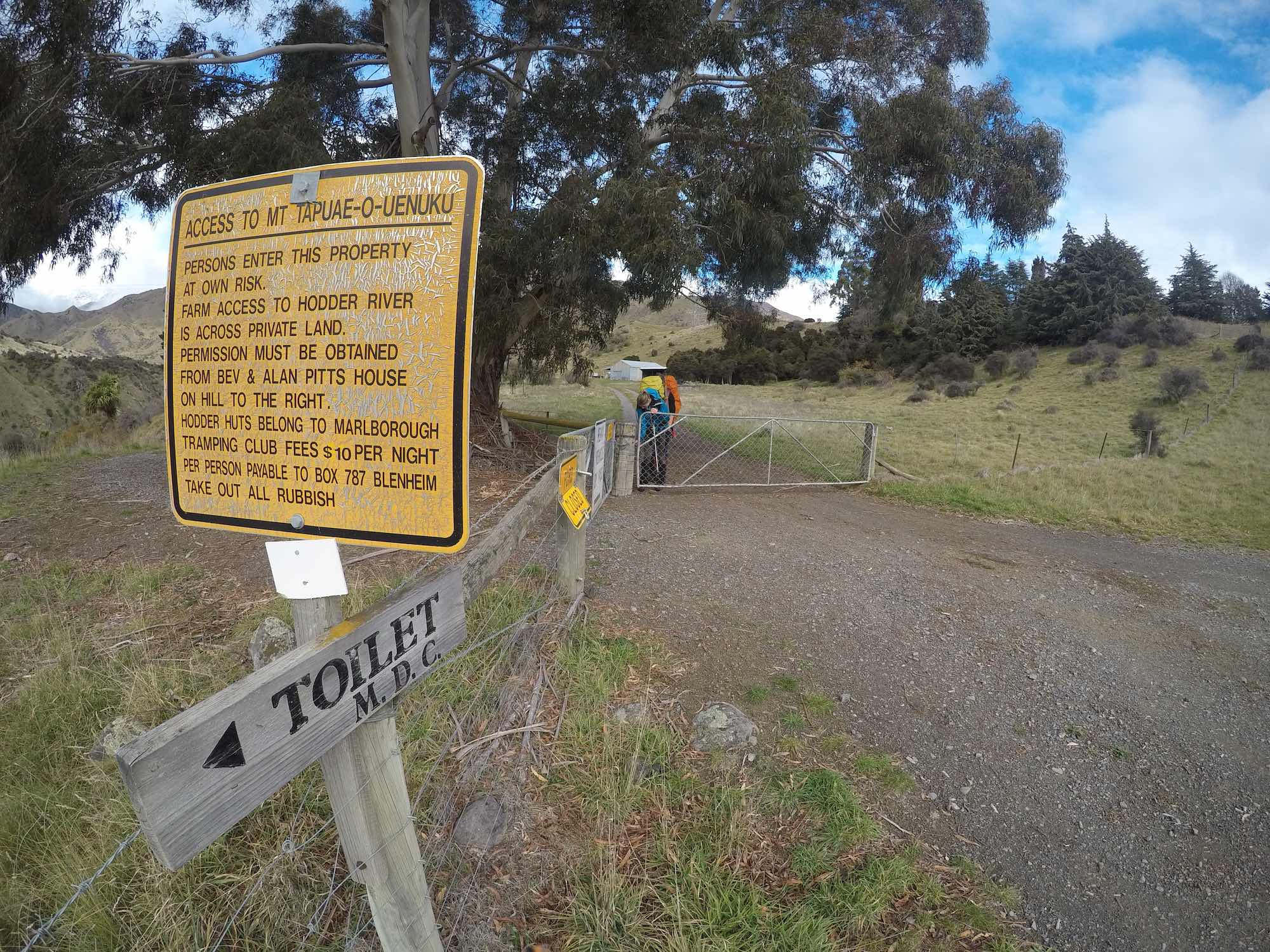 Check out this awesome video of the trip made by Nick and Elisabet: