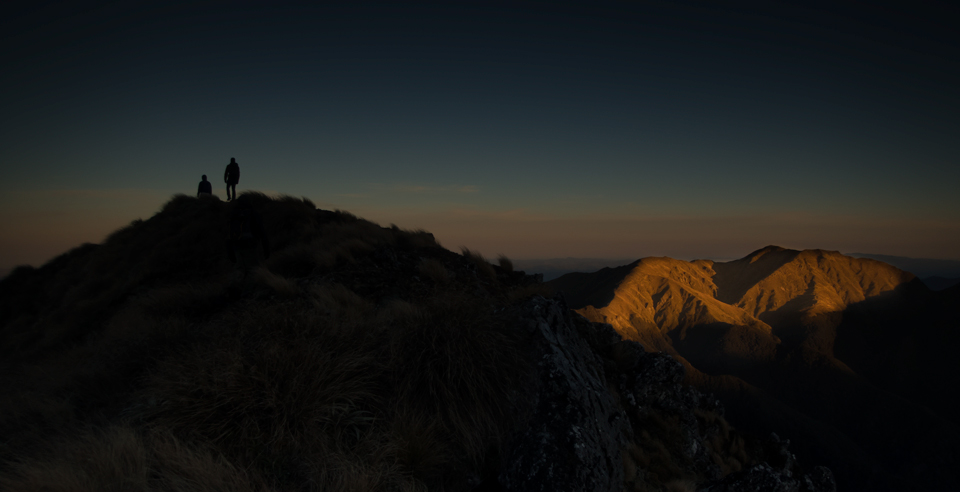 We arrived at the Holdsworth carpark at 8 am just in time to see the full moon setting below the western hills. Twelve hours later on the ridge between Jumbo and Mt Holdsworth we saw a blood-red full moon rise slowly above the eastern horizon. In between we enjoyed a glorious Tararua early-winter day travelling along the ridges around the headwaters of the Atiwhakatu River.

We climbed up the trappers’ track to Pinnacle then wandered along Pinnacle Ridge to the Mitre Flats Track turnoff. We climbed up to Baldy and the main ridge just below South King. As we started south along the ridge wispy cloud drifted gently over the Broken Axe Pinnacles making them appear even more dramatic than usual. We shunned the sidle track and scrambled up the first steep step (this was after all the second of the Alp 1 long day training walks) then enjoyed the tip-toe along the narrow ridge mindful that falling here was not an option. Then over McGregor and along to Angle Knob. As the sky was now perfectly clear there were no excuses for going wrong here as many do.

It was easy gently downhill travel from here to Jumbo where it became dark enough to need our head torches. Then about an hour later the moon rose in a blaze of colour such that none of us had seen before. We stayed transfixed here for some time unable to look away from the glorious spectacle but the chill meant we had to finally move on over Mt Holdsworth with its small patches of remnant snow and then down to Powell Hut. We stopped here for a short rest before the final easy walk down to the cars.

Although we took a relatively leisurely 15 hours for the round trip we enjoyed every minute— and if it was was ever really needed it reminded us all that on a good day a wander in the Tararuas is the best workout for both body and soul.

PS. Wondered why they are called the Broken Axe Pinnacles? Well, in 1900 a Mr H Holmes found a broken Maori adze on the ridge. Simple as that – and showing that Maori likely used the route for their travels through the Tararuas.

PPS. If you always planned to traverse the section above the sidle track but never got to do it then take the virtual trip below and save the bother.