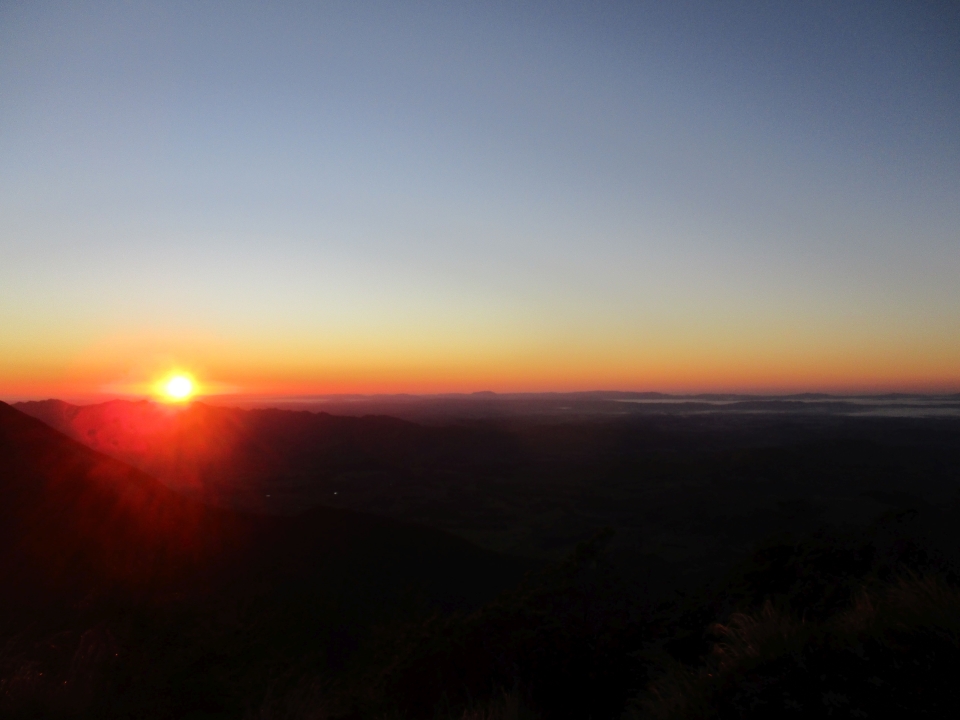 On Friday we stayed at Triplex Hut before our group had a very relaxed start, while the medium group took off by 7am. The climb up to Sunrise Hut was interspersed with interesting little info signs about the surrounding bush (such as mistletoe) and bird life.

At Sunrise Hut we left our overnight gear behind, and just carried our bags with daygear up to Armstrong Saddle and over to Top Maropea Hut. It was a bluebird day on the tops with amazing visibility and everyone really enjoyed this section.

At Top Maropea Hut we had a good explore of the hut and found the hilarious DoC sign stating that any sightings of “Ruahine Mountain Dolphins” should be reported directly to them, as well as any sightings of kaka, falcon or blue ducks. We thought the inclusion of Ruahine Mountain Dolphins on this sign was a good strategy to draw attention to it. We lazed in the sun outside Top Maropea Hut for a long time hoping for a sighting of these mysterious creatures but no Ruahine Mountain Dolphins appeared so we decided it was time to head back to Sunrise Hut; not before seeing that two young tramping blokes had tried to use the hut’s intentions book as a dating service. Not only had they left their names and numbers but also their ages for any interested parties.

Sunrise Hut filled up really quickly, with over 25 people in the hut that night. There were lots of different meals being made; from sausages through to wraps. A number of people were impressed by our group’s dessert. Cookies and chocolate créme with instant pudding that we left outside in the cold mountain air to set, accompanied by Oreos and marshmallows. A Chilean group cooked up some mulled wine over the fire……..they kindly offered me some to taste which was delicious.

On Sunday morning everyone was up early to see the amazing sunrise, our photos didn’t do it justice for sure. We wandered back down the Sunrise Track to the junction for Waipawa Forks Hut. This is where the Ruahine Mountain Dolphins begun to cause some mayhem. Too busy dolphin searching, I forgot I had read that Waipawa Hut is located 200m downstream on the true right of the river and instead got out my map only to be misdirected by that……the topo map indicates the hut is just a little upstream and opposite where the track came out onto Waipawa River.

We were fairly sure that it was in fact downstream but did a quick scout upstream before finding the hut downstream. The track up to the hut from the river does indeed loop back in the upstream direction though, which was the cause of the confusion. However, I just held the Ruahine Mountain Dolphins responsible for this cunning deception. While sitting at the hut lamenting the distraction these infamous dolphins had caused, the medium group turned up……having had the same dilemma as us about where the hut was located. Obviously the Ruahine Mountain Dolphins had led them astray too.

They headed back up to Sunrise track away from the conniving creatures, while my group headed down Waipawa River to do some rock hopping and to see if we could spot any of these Ruahine Mountain Dolphins basking in the sun. By now my punters had heard that we were taking the Swamp Track back to the van from the river, and there were a few nervous punters wondering if they would be wading through a waist-deep swamp. It probably didn’t reassure them when I told them that I had read that this track was known to be boggy at times………..

Swamp Track turned out to be a lovely bush track full of bird life. Along the track there were a few info signs again. One sign that was particularly weathered explained the geology of Swamp Track and why the swamp my punters had feared no longer existed. On reading the sign out to my group I misread the words “past a swamp” as “pasta swamp” and wondered why I was met with complete silence and odd looks from the rest of the group. I, of course, blamed the dolphins again for distracting me……

We eventually survived the “pasta swamp” and the misdirection caused by the Ruahine Mountain Dolphins to make it back to the van safely to find the other group had also survived as well.