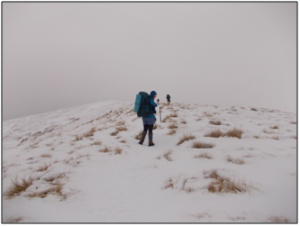 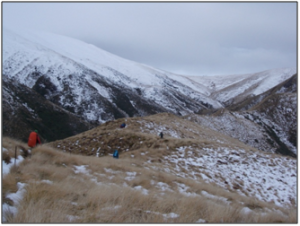 Friday night departure went smoothly. But things slowed to a halt when two of us ordered dinner at the Thai slow-food takeaway in Levin. Eventually our dinner arrived and we set off again. Our driver safely manoeuvred around the many roundabouts in Fielding, and after a bit of exploratory detouring we arrived at the busy Rangiwahia road end. Mmm –hope of beds in Rangiwahia Hut were looking dashed.

The night was calm and not too cool as we sauntered up the track. Sarah and I passed one low-hanging possum, unperturbed by our presence. We climbed the grunty slip detour to the stars. Then descended to the bridge way above the river – well it sounded as though there was a river down there but it was too dark and too far below to see it. Onwards and upwards we arrived at the full Rangiwahia Hut at 11pm for a cosy night on the floor. Craig, equipped with an 850 loft sleeping bag and not one to be discouraged by a small patch of snow, went for alfresco slumber on the east deck. Sarah, Jamie and I stoically shivered inside most of the night. It meant we had an early rise – hot water and gas heater warmed us up and got us on the trail to Triangle Hut at 8am.

The theme for Saturday morning was ‘snow’, glorious snow. In snow we sauntered (briefly), trudged and bounced over snow-coated tussock. Paul, Jamie and Brendan scratched their bare legs in the snow and bled liberally all over it. Craig sank up to his butt in snow and briefly lost a boot in it. Sarah slid down an icy funnel and let out a not-quite blood curdling scream. Bernie side kicked its iciness and tiptoed across the snow pretending to be weightless only to discover he wasn’t. I squinted at snow and sitting glissaded down it.

And whilst we were doing all that, there was the seductive white vista stretched before us with brushstrokes of tussock, a brooding layer of steel-toned cloud hovering above the horizon, the knock-you over wind. It was a stunning, elemental and tiring morning. Thanks to Jamie, Brendan and Bernie for being at the front to carve out a path through the white stuff. I haven’t read about it in ‘Alpine tramping for dummies’ but I’m sure the 5 litres of water Brendan was carrying gave him the ideal centre of buoyancy for this task.

The spur down to Triangle Hut became snowless and our feet adapted into steep, stony and rooty mode. We had our first river crossing in front of Triangle Hut, our stop for a relaxing lunch with a hot cuppa on the veranda. Before we became too cosy we set off down the river, immersing ourselves deeper and deeper in the reasonably swiftly flowing water. The water was cold, but bearable up to my thighs – thankfully it didn’t get deeper. A tranquil and sheltered 1.5 hours travelling through lush vegetation, gorge-like bends and around calm clear aqua pools (very swimmable in summer!).

We left the river at the exit point and ascended abruptly on a route made by mountain goats for turbo-charged mountain goats. At a saddle, we paused on the few flat meters and then descended back to the river, along another mountain goat route. Mmm- Craig’s exploratory summer trip on the remaining part of the river would avoid the mountain goat detour.

Back down at a deeper and faster part of the river, Sarah, Craig and I linked up for the river crossing. By the time we arrived at Iron Gate Hut, the rest of our group had the fire going and the billy on. We all settled in for the night in the cosy wee hut, chatting and helping Paul, our leader and head chef, make a humungous delicious meal of pasta Bolognese. Most of us rose to the challenge and finished it all. But wait, there was an oversupply of biscuits. Again we rose to the challenge and made a valiant effort of devouring them, including the mega-Afghans. Weary, full and feeling exhilarated by the perfect tramping day, we went to bed early.

It rained quite heavily during some of the morning whilst we slept in. After a relaxed breakfast with some leftover biscuits, we set off at 8:30 towards Heritage Lodge. The track followed the river, going up and down and occasionally next to the river. We were fortunate to see a couple of the native blue ducks that were hanging out in a quiet pool near the bank of the river, hopefully enjoying the light rain. We were on a well-worn track that didn’t offer the same tramping excitement as the previous day, but gave us the opportunity to focus on the verdant bush.

After 3 hours or so, we arrived at Heritage Lodge as it started to rain heavily. So we relaxed (again!) in the hut over a lengthy lunch with a cuppa and the remaining biscuits, discussed the relative roominess of the hut and browsed fishing magazines. After a while, a few of us put on over-pants. Of course that made the rain stop and we headed off for the last half hour to the road end. Thankfully, the Easy group had dropped our van off for us.

We celebrated an exciting, exhilarating and elemental tramp with refreshments at the Kimbolton café, and caught up on news of the weather bomb we had missed!